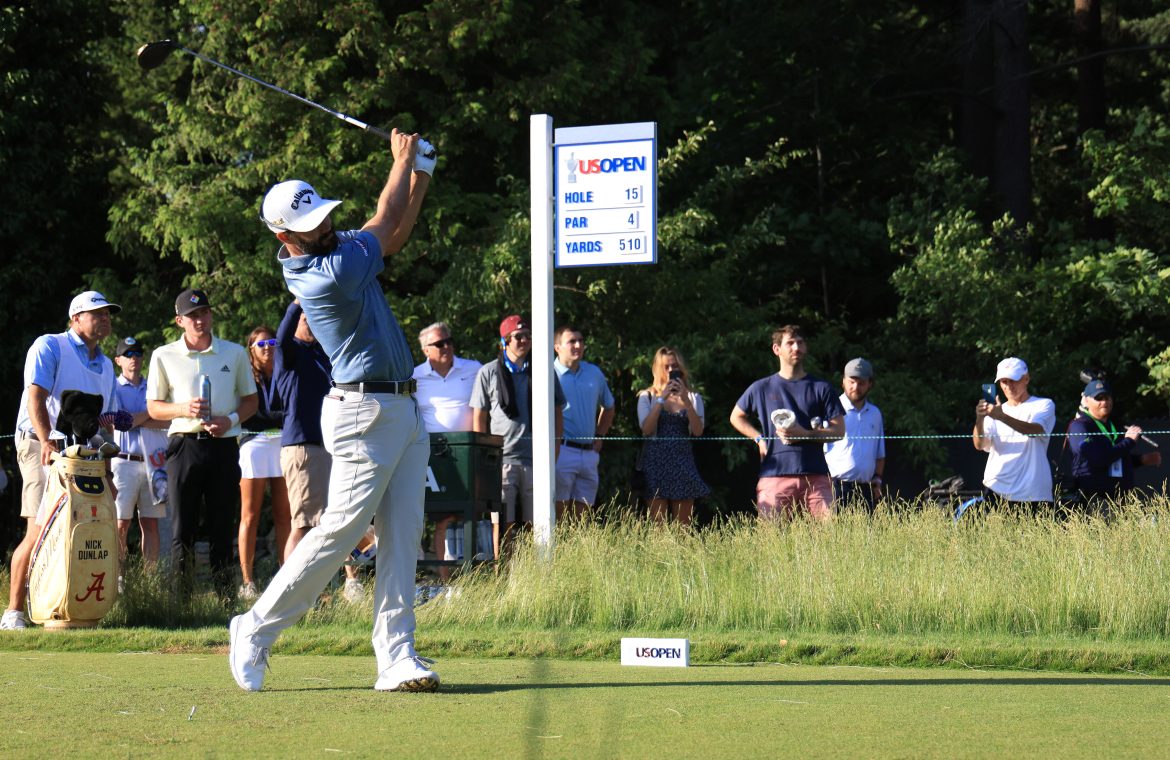 Adam Hadwin may have entered uncharted territory by grabbing the first-round lead at the U.S. Open on Thursday but remained a picture of calm throughout and credited his caddie for keeping him grounded on the big stage.

Hadwin, with Joe Cruz on his bag, fired a four-under-par 66 at The Country Club outside Boston which marked his lowest score in 63 career rounds in major championships.

For his efforts, Hadwin earned his first lead/co-lead after any round in a major and yet he looked as if he had been in that position many times before.

“I think Joe is so even-keel that looking at him you would never know if I was five-under or five-over, which is great. That’s what you want to have as a player,” the 34-year-old Canadian told reporters.

“Like I’ve mentioned, I’ve been trying to work on that myself. I’m trying to be a little bit more even-keel, maybe a little less emotional on the golf course even though it comes out at times.”

Whereas once there would have been fits and slammed clubs after missed shots, Hadwin was a picture of poise playing a tournament known as golf’s toughest test while on a layout that features tight fairways, lush rough and small greens.

After his first bogey of the day, at the par-four third, Hadwin kept a smile on his bearded face and went on to birdie five of the next six holes to surge up the leaderboard.

He also followed his only other bogey with a birdie even while dealing with the tougher afternoon conditions as the wind started to pick up.

“Not much better of a start to a U.S. Open I don’t think that you can ask for,” said Hadwin. “I did a lot of good things. Got a nice run there midway through the front. I do think there’s a few more scorable holes as long as you hit good quality golf shots there.”

MCILROY IN THE MIX

Tournament favorite Rory McIlroy was among the five-man pack sitting one shot back of Canada’s Adam Hadwin after the first round of the U.S. Open on Thursday while Phil Mickelson struggled a week after making his LIV Golf debut.

Mickelson, playing on his 52nd birthday and three days after facing an onslaught of questions about his involvement with the Saudi-backed LIV series, shot an unsightly eight-over par 78 to sit near the bottom of the 156-player field at The Country Club.

A record six-time U.S. Open runner-up, Mickelson’s self-imposed four-month hiatus following comments he made about the LIV circuit and PGA Tour was evident as soon as he set off in the tougher afternoon conditions.

The long-time fan favorite bogeyed three of his first five holes and then made a double-bogey at the par-three sixth where he four-putted from 12 feet.

Mickelson, who struggled on the greens all day, added another double-bogey at the 12th hole before closing another bogey on a day when his latest bid for the career Grand Slam effectively came to an end.

McIlroy, who came into the year’s third major fresh off a successful title defence in Canada, went out early and shot a three-under-par 67 and maintained a clean scorecard until a bogey at the final hole.

“Even though I’m standing up here slightly frustrated that I bogeyed the last, it’s a great start to the tournament,” said McIlroy, who has gone nearly eight years since winning the last of his four major titles. “Just basically did everything that you need to do at a U.S. Open.”

Leader Hadwin, who has never finished better than 24th in his 19 major championship appearances, carded five birdies over a sizzling six-hole stretch on the front nine to surge up the leaderboard.

Hadwin, who has one PGA Tour win to his name, showed plenty of poise the rest of the way and coolly offset a bogey at the 12th with a birdie at the following en route to a 66 that marked his lowest score in 63 career rounds in major championships.

“Not much better of a start to a U.S. Open I don’t think that you can ask for. I did a lot of good things,” said Hadwin.

“There’s lots of golf left. I’ve been around the block a few times, and I’ve missed cuts from this position before.”

Among a pack of seven golfers sitting two shots off the pace was former world number one and 2016 U.S. Open champion Dustin Johnson, who like Mickelson also decided to join the lucrative and controversial LIV series.

Prior to the start of the round, a LIV Golf Twitter post read “Good Luck” and included headshots of the 15 players in the U.S. Open field who have joined its ranks.

Of those golfers, none fared better than the long-hitting Johnson and the worst score of the bunch was the 12-over 82 carded by Australian Jed Morgan.

Defending champion and world number two Jon Rahm was level with PGA Championship winner Justin Thomas and among a group sitting three shots back of Hadwin.

Rahm unleashed a sizable fist pump after draining a 21-foot putt at the last for a rather unusual birdie that came after a wayward tee shot that led to two kids taking his ball.

“To hit two wayward drives in the last two holes and somehow end up with two birdie putts and making the last one — it’s more the fact of making putt to break par on the first round of the U.S. Open,” said Rahm. “It’s quite a big deal.”