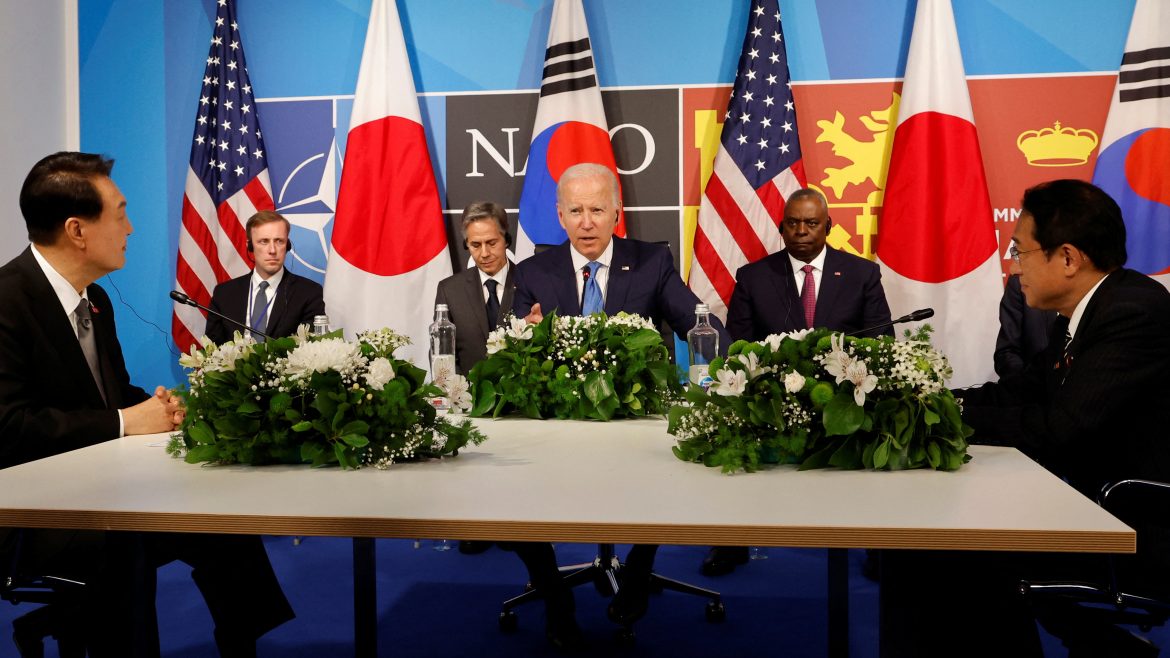 The leaders of the United States, South Korea and Japan on Wednesday expressed deep concern over North Korea‘s missile tests and said they would cooperate more closely to address the threat posed by Pyongyang.

U.S. President Joe Biden, Japanese Prime Minister Fumio Kishida and South Korean President Yoon Suk-yeol met on the sidelines of the NATO summit in Madrid and agreed that the progress of North Korea‘s nuclear and missile programs posed serious threats to not only the Korean peninsula but also East Asia and the world.

North Korea has this year been conducting missile tests at an unprecedented pace and is believed by some to be preparing for another nuclear test.

The three leaders agreed to explore further means to reinforce “extended deterrence” against North Korea – the ability of the U.S. military, particularly its nuclear forces, to deter attacks on U.S. allies – along with security cooperation.

“The deterrence capabilities of the Japan-U.S. and U.S.-Republic of Korea alliances need to be upgraded as part of the essential effort to strengthen the trilateral partnership between Japan, the U.S., and ROK,” Kishida said.

The South Korean and Japanese leaders are attending NATO’s annual summit as observers for the first time.

Ties between Japan and South Korea have long been strained by memories of Japan’s occupation of the Korean Peninsula from 1910 to 1945.

Relations deteriorated to their worst in years under South Korea’s previous President Moon Jae-in, with spats over territory and history and the two nations calling off an intelligence sharing pact. Yoon, though, has expressed a desire to repair ties, and Kishida has also seemed to respond favorably.