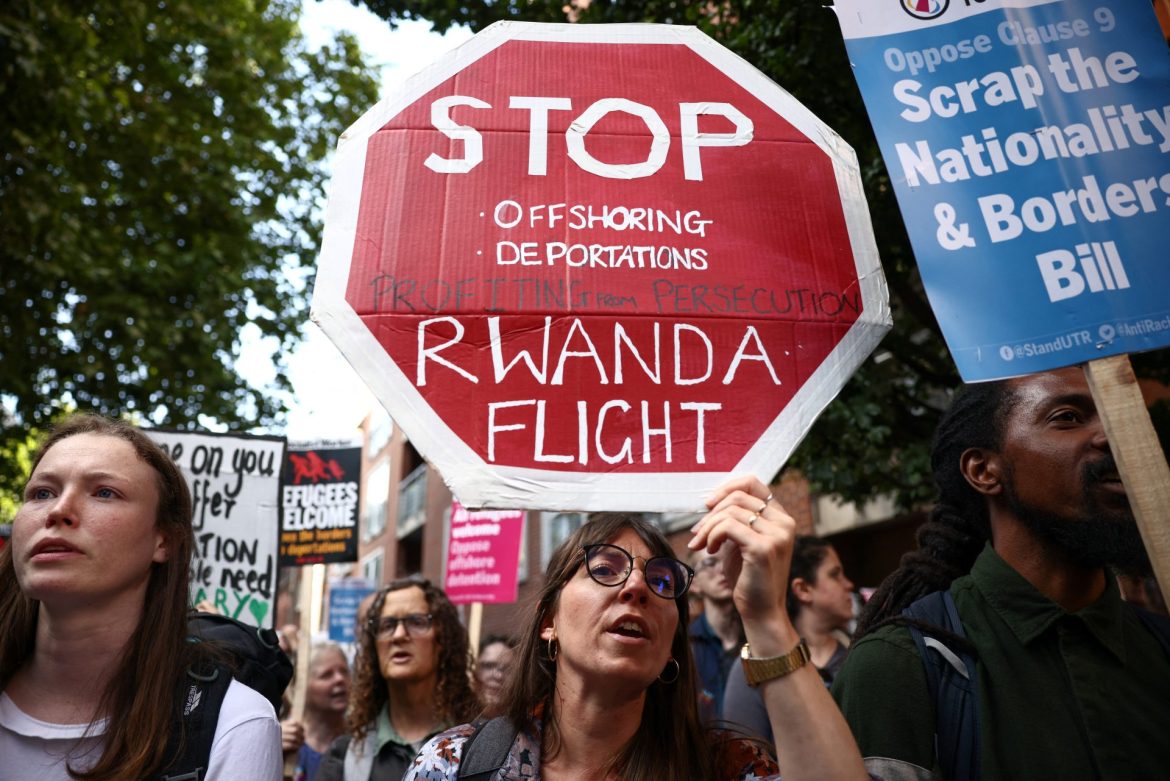 Britain’s first scheduled flight taking asylum seekers to Rwanda was set to depart on Tuesday, with the government warning that anyone who avoided it through last-minute legal challenges would be put on a later plane despite an outcry from critics.

Britain has struck a 120-million-pound ($148 million) deal with Rwanda to send some migrants, who had arrived by crossing the English Channel in small boats from Europe, to live in the East African country.

The plan, which the government says will stem the flow of dangerous cross-Channel trips and smash people-smuggling networks, has been met with strong opposition from political opponents, charities and religious leaders who say it is inhumane.

The United Nations’ refugee chief called it “catastrophic”, the entire leadership of the Church of England denounced it as immoral and shameful, and media reports have said heir to the throne Prince Charles had privately described the plan as “appalling”.

With just hours to go before the flight was due to depart, Britain’s Supreme Court rejected a bid from one Iraqi individual to have his deportation blocked, while a handful of others also had their claims dismissed by the High Court in London. An attempt to put an injunction on the flight failed on Monday.

However, at least 30 others were scheduled to be on the first flight have successfully argued that they should not be deported to Rwanda on health or human rights grounds, meaning just seven were due to leave.

Other legal challenges were still ongoing, while in total more than 130 people have been given deportation notices. Television footage showed a passenger jet waiting on the runway at an air force base in southwest England.

Prime Minister Boris Johnson, who has previously attacked “leftie” lawyers for trying to undermine policy, said the latest legal bids were undermining the government’s attempts to support safe and legal routes to come to Britain and delivered a thinly-veiled attack on his clergy and royal critics.

“We are not going to be in any way deterred or abashed by some of the criticism that has been directed upon this policy, some of it from slightly unexpected quarters, we are going to get on and deliver,” he told his cabinet ministers.

Foreign Secretary Liz Truss told Sky News that even if only a handful of migrants were on board the first flight, it would establish a principle.

“There will be people on this flight and if they’re not on this flight, they will be on the next flight because we are determined to break the model of the appalling people traffickers,” she told Sky News.

There is also criticism that it will fail in his objective of deterring dangerous Channel crossings.

According to government figures, more than 28,500 people were detected arriving in Britain on small boats last year. Dozens more, including women and young children, arrived on Tuesday, a Reuters witness in the Channel port of Dover said.

Human rights groups say the policy will put migrants at risk. The UNHCR has said Rwanda, whose own human rights record is under scrutiny, does not have the capacity to process the claims, and there is a risk some migrants could be returned to countries from which they had fled.

At migrant quarters in Kigali, asylum seekers said Rwanda was better than the filthy, dangerous Libyan detention centers they had come from as part of a 2019 agreement – but they still wanted to get to Europe.

“I cannot live here forever. When I reach Europe or Canada I will study and work,” Eritrean Teame Goitom said. “I left Eritrea because there is a dictatorship. I want to go to Europe because there is freedom.”

But, Ismail Bakina, the building manager of the 50-room newly renovated hostel where the migrants from Britain will be housed says those who went there would be free.

A full hearing to determine the legality of the British policy as a whole is due to be heard at the High Court in London in July.