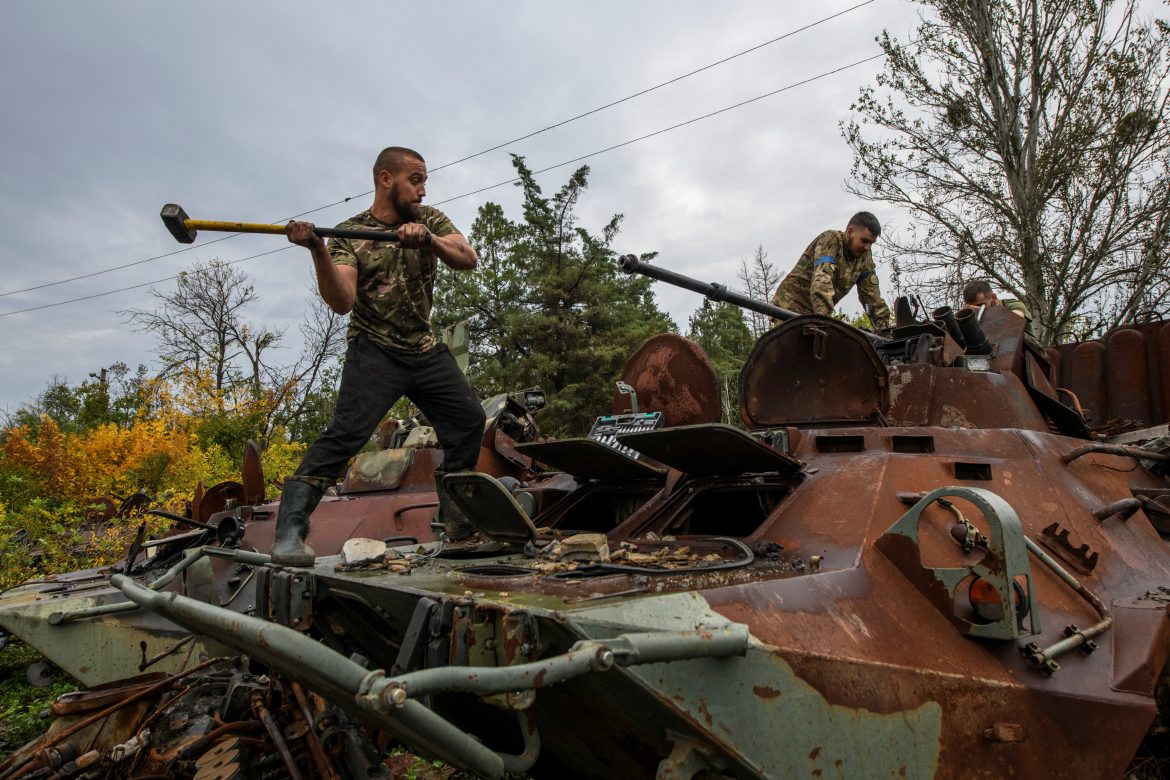 Kyiv officials reported new gains in Ukraine’s south on Monday following Ukraine’s successful liberation of Lyman this weekend. The strategic territory in the eastern Donetsk region has served as a central hub for Russian forces since May.

Following Moscow’s humiliating defeat that saw 5,500 Russian troops flee the city, news emerged that Ukraine’s forces broke through Russian lines in the village of Khreshchenivka in the Kherson region, the Associated Press reported. Located north of the Crimean Peninsula that was annexed by Moscow in 2014, Kherson was the first city to fall after Russia’s invasion on Feb. 24. Ukraine has been unrelenting in its counteroffensive in the region which began this summer, attacking Russian supply lines and pressing further into the areas west of the Dnieper River held by the Russians.

Lyman and Khreshchenivka are in territories in the east and south, respectively, that Russia illegally annexed on Friday.

Ukrainian President Volodymyr Zelenskyy hailed the recent successes in a nightly video broadcast in which he also announced the liberation of his hometown.

“The story of the liberation of Lyman in the Donetsk region has now become the most popular in the media — but the successes of our soldiers are not limited to Lyman,” he said before congratulating “the soldiers of the 129th Brigade of my native Kryvy Rih, who distinguished themselves with good results and liberated, in particular, Arkhanhelske and Myroliubivka.”

A Russian-installed official in the Kherson region, Kirill Stremousov, acknowledged in a video statement on Monday morning that the Ukrainian forces “have broken through a little deeper.” Still, he insisted that “everything is under control” and that Russia’s “defense system is working” in the region.

Putin’s allies have grown increasingly frustrated with Ukraine’s recent string of successes in a counteroffensive that has reshaped the war, thanks, in large part, to Western-supplied advanced weapons including High-Mobility Artillery Rocket Systems (HIMARS).

Chechen warlord Ramzan Kadyrov, a fierce Putin ally, called on Moscow to deploy “low-yield” nuclear weapons, saying Ukraine’s actions demand that “more drastic measures” be taken, Metro reported. Putin and other Kremlin officials have repeatedly threatened the possibility of the use of nuclear weapons, particularly in recent weeks; however, Kadyrov’s comments mark the first explicit call to deploy them.

“In my personal opinion, more drastic measures should be taken, up to the declaration of martial law in the border areas and the use of low-yield nuclear weapons,” Kadyrov declared on the Telegram app. “Use every opportunity and every weapon to defend OUR territory,” he continued.

Elsewhere, the head of the International Atomic Energy Agency (IAEA), the United Nations’ nuclear watchdog group, called for the release of the director-general of Ukraine’s Russian-occupied Zaporizhzhia nuclear power plant, saying his detention posed a major threat to safety and security. On Friday, a Russian patrol detained Ihor Murashov at Europe’s largest nuclear power station that has been teetering on the brink of a nuclear disaster for months.

“IAEA Director General Rafael Grossi expressed the hope that Mr Murashov will return to his family safely and promptly and will be able to resume his important functions at the plant,” the agency tweeted late on Saturday.

President Zelenskyy called Murashov’s abduction a “clear act of Russian terror, for which the terrorist state must bear an ever-increasing punishment,” in his nightly video address.

The IAEA has been working around the clock to secure Murashov’s release. Ukrainian workers have remained at the plant, continuing operations under Russian occupation for months.

Elsewhere in Europe, Norway’s military said on Monday that it had deployed its navy and air force to patrol offshore petroleum fields. The move is part of a broader effort to increase security in the wake of four Nord Stream gas pipeline leaks which several European leaders have attributed to Russian sabotage. Britain, Germany, and France have all agreed to assist Norway with enhanced security measures.

Meanwhile, gas from the leaks continues to flow into the Baltic Sea off the coast of Sweden and Denmark.