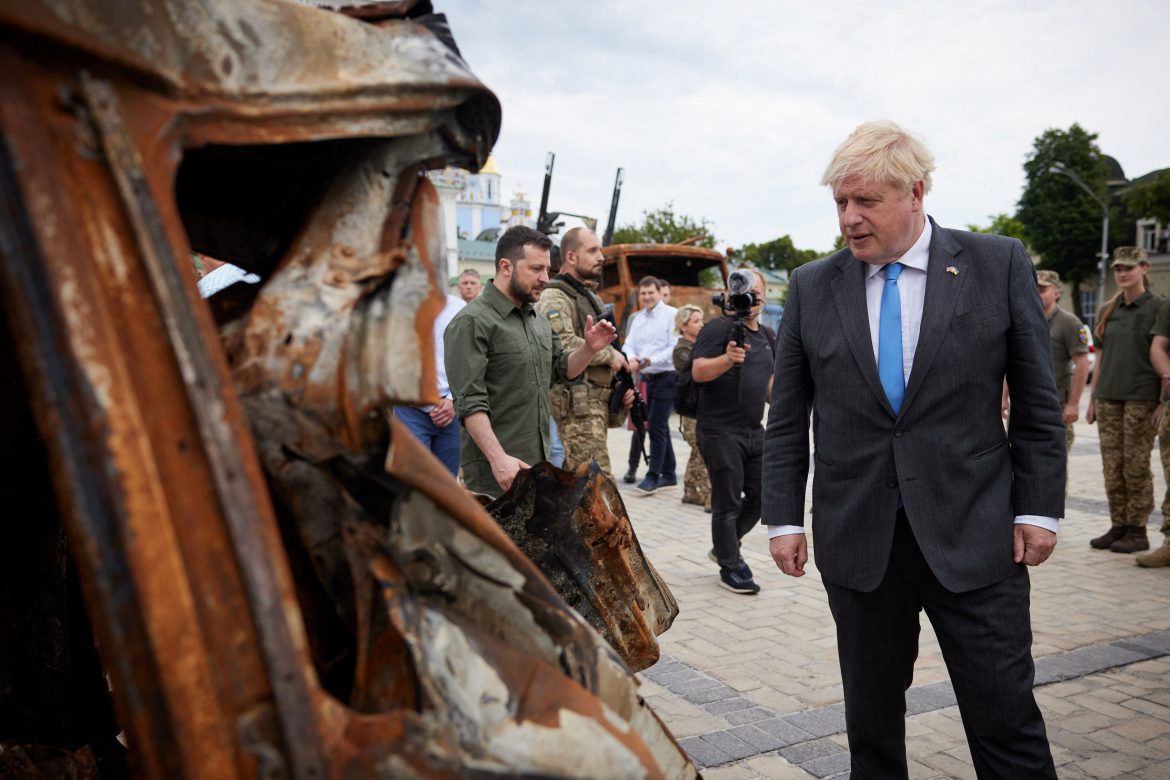 Within the last 48 hours, Russian forces in Ukraine have renewed a push to advance south of Izium according to British defense reports. Meanwhile, fighting in the Donetsk region trapped over 70 miners underground this weekend. A surprise Friday visit from U.K. Prime Minister Boris Johnson showed continued British support for the embattled nation.

The Russian attempt to push past Izium, located on the eastern side of Ukraine, is an important strategic move. Britain’s defense ministry warned on Twitter that, if successful, Moscow’s forces would gain a deeper foothold into the Donetsk region and be able to advance on the city of Sievierodonetsk from the north. They also warned of future likely civilian tragedies if citizens do not leave through a humanitarian corridor.

Fighting in the Donestk region remains intense. On Friday, 77 miners at the Zasyadko coal mine were trapped after a power outage and shelling. A local pro-Russian separatist authority said all miners were rescued this morning. They blamed Kyiv for the bombardment. Kyiv has not responded.

The brutal fight for the eastern part of the nation has sparked concerns that Ukraine will falter in a test of endurance. Global support remains strong for the nation.

“The Russians are grinding forward inch by inch and it is vital for us to show what we know to be true which is that Ukraine can win and will win,” U.K. Prime Minister Boris Johnson told reporters on Saturday, after returning home from a surprise visit to Kyiv. The words echo what he told Zelensky and Ukrainian citizens; during his visit he offered a “clear and simple message” of support.

Johnson’s office said he proposed a large-scale training operation for Ukrainian forces with the potential to train 10,000 additional soldiers in 120 days. Johnson said it “could change the equation of this war” by using the greatest resource Ukraine has, a “determination to win.”

Johnson faced criticism from his Conservative Party for electing to go to Ukraine instead of attending a conference in Northern England. Johnson also faced, but survived, a ‘confidence vote’ earlier in June.

The day before Johnson’s visit, leaders from France, Germany, Italy, and Romania also made appearances in Kyiv. During their visit, they endorsed Ukraine and Moldova as potential European Union allies.

Global civilian support also remains strong for Ukraine, best highlighted this week by the actions of Russian journalist Dmitry Muratov. Muratov announced he would auction his Nobel Peace medal to provide relief for Ukrainian refugees. The co-founder and editor-in-chief of Novaya Gazeta, a newspaper that remains critical of the Kremlin, described his distress to Reuters in an exclusive interview.

“We thought for a long time about what we could do … and we thought that everyone should give away something dear to them, important to them,” Muratov said, about making his decision. The medal will be sold on June 20.

However, the U.S. is in danger of backpedaling on selling four large and weaponizable drones to Ukraine due to fears that the advanced MQ-1C Gray Eagle Drones might fall into Moscow’s hands. The White House approved the arms sale, according to anonymous officials who spoke to Reuters. The news media first reported on the arms deal in June, though their sources say it stems from March conversations.

Pentagon spokesperson Sue Gough said about the sale, “Technology security reviews are a standard practice for the transfer of U.S. defense articles to all international partners. All cases are reviewed individually on their own merit.”

The deal is under review by high-ranking Pentagon officials, according to one Reuters source with knowledge of the deal. While a less sophisticated radar and sensor package may be placed on the drone to prevent the security risk, that would cause a delay of months.