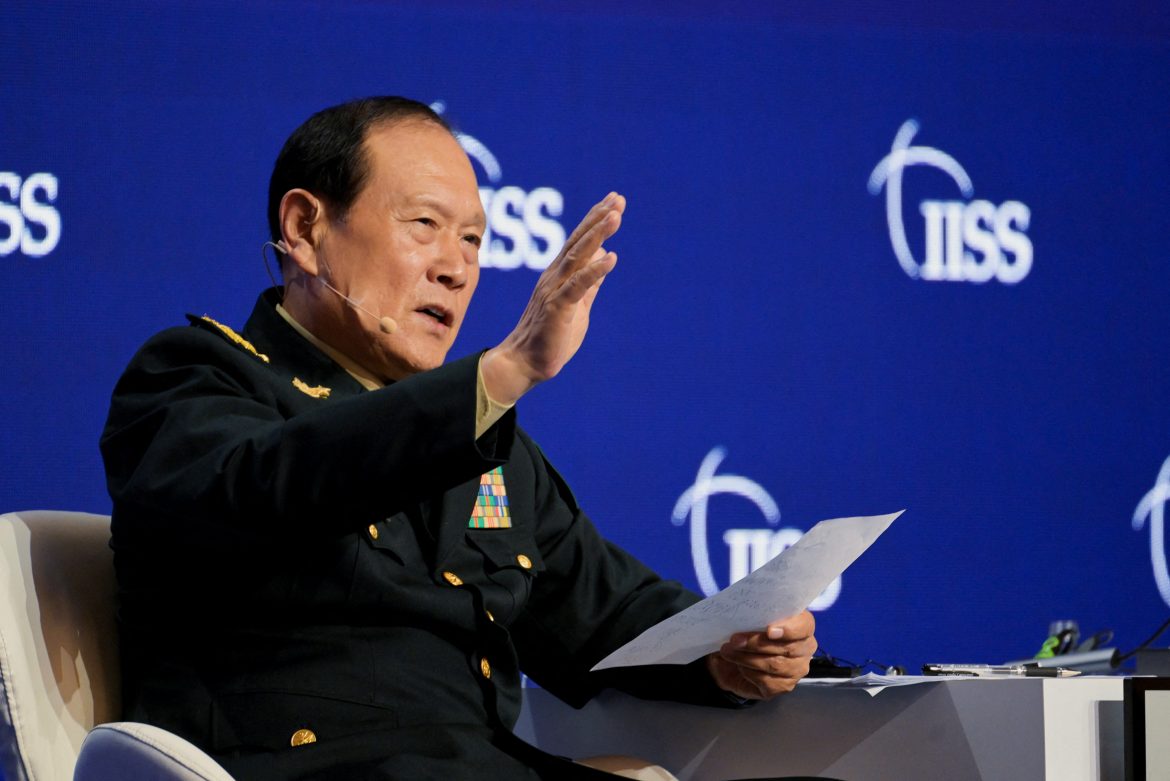 The war in Ukraine and China’s increasingly tense relationship with the United States featured in nearly every session of the Shangri-La Dialogue in Singapore, which ended on Sunday after three days of discussions.

Chinese Defense Minister Wei Fenghe, who gave one of the featured speeches on the meeting’s final day, said it was up to the United States to improve the bilateral relationship with his country, as ties were at a critical juncture.

“We request the U.S. side to stop smearing and containing China. Stop interfering in China’s internal affairs. The bilateral relationship cannot improve unless the U.S. side can do that,” Wei, dressed in the uniform of a general in the People’s Liberation Army, told delegates.

The Shangri-La Dialogue is Asia’s premier security meeting and this year attracted 575 delegates from 40 countries – including diplomats, defense officials and weapons makers.

Austin said in his speech at the meeting on Saturday that there had been an “alarming” increase in the number of unsafe and unprofessional encounters between Chinese planes and vessels with those of other countries. He added that the United States would stand by its allies, including Taiwan.

U.S.-China relations usually dominate the annual meeting in Singapore – held for the first time since 2019 because of the pandemic – but this year, Russia’s invasion of Ukraine was in the foreground.

The highlight was an address to the meeting via video link by Ukrainian President Volodymyr Zelenskyy, who warned delegates that the invasion of his nation threatened the rules-based order and put the entire world in danger of famine and food crises.

Wei said that China supported peace talks and that Beijing had not provided any materiel to Russia. He said providing weapons and imposing sanctions would not help the situation.

“He did also underline that China is a partner of Russia and not an ally of Russia and that they do not have an alliance,” Nouwens said. “They’re underlining that at the end of the day, Chinese policy has always been to pursue China’s own interests and not tie itself to those other countries.”

Russia was not invited to the meeting, which Singapore Defense Minister Ng Eng Hen said was understandable, although he said, “The search for compromise, the search for common ground, helps diplomatic efforts”.

Ukrainian deputy foreign minister Dmytro Senik told Reuters on Sunday that more weapons were needed to help his country reclaim territory lost to the Russians, and that the government was working on ways to get grain exports out of the country.

“We’ve established two routes which are helping us export these agricultural commodities,” Senik said. “Those routes are not perfect, because it creates certain bottlenecks, but we are doing our best.”

Russia calls its actions in Ukraine a “special operation” that it says is not designed to occupy territory but to destroy its southern neighbor’s military capabilities and capture what it regards as dangerous nationalists.

Addressing the issue of Taiwan, Defense Minister Wei said China’s position on the island, which Beijing views as a province, was unchanged. He said the Chinese government sought “peaceful reunification” with Taiwan but reserved “other options”.

In Taiwan, Premier Su Tseng-chang said on Sunday that the island does not want to close the door to China and is willing to engage in the spirit of goodwill, but on an equal basis and without political preconditions.

South Korean Defense Minister Lee Jong-sup said at the Singapore meeting that his country would enhance its defense capabilities and work closely with the United States and Japan to counter North Korea’s nuclear and missile threat. The South would also help North Korea if it denuclearized, he said.

Fiji’s Defense Minister Inia Seruiratu said that for all the focus on military matters at Shangri-La Dialogue, more pressing threats were being ignored.

“In our blue Pacific continent, machine guns, fighter jets, grey ships and green battalions are not our primary security concern,” Seruiratu said. “The single greatest threat to our very existence is climate change. It threatens our very hopes and dreams of prosperity.”