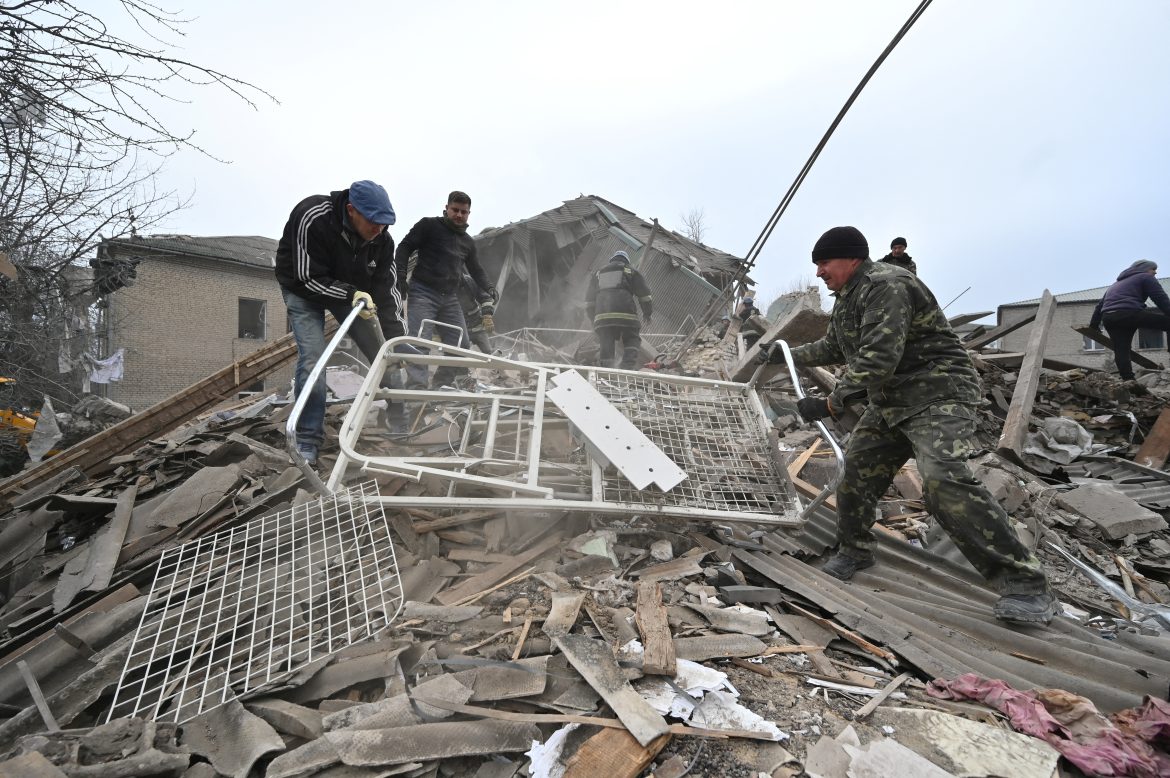 Britain believes Russia has nearly exhausted its stock of Iran-made weapons as the soviet-nation continues a relentless onslaught against important civilian infrastructure.

Britain’s Ministry of Defense said that the Iranian-suicide drones, noted for their use in September, have not been used as frequently in recent weeks and suspect that Russia’s supply is dwindling and that they will soon seek a resupply.

However, that hasn’t stopped missile strikes as the war enters its tenth month. On Wednesday, Kyiv residents took shelter as air raid sirens continue to sound within the city and in other regions throughout Ukraine.

Vitali Klitschko, mayor of the city, said on the Telegram messaging app that “one of the capital’s infrastructure facilities has been hit,” but did not provide more details.

The  Kyiv City Military Administration said on Wednesday that one person had been killed in the shelling.

The nation is also reeling from the news that a Russian rocket launched during the night killed a 2-day-old baby housed in a hospital maternity ward in south Ukraine.

The hospital was located in Viliansk, north of Zaporizhzhia and around 300 miles southeast of Kyiv.

Regional governor Oleksandr Starukh reported the infant’s death on Telegram, writing, “Grief fills our hearts – a baby who had just appeared in the world has been killed.”

Horrible pain. We will never forget and never forgive.

My sincere condolences to the loved ones of the baby. Speedy recovery to the injured. Our hearts are with you.

The child’s mother and doctor were successfully rescued from the rubble of the Vilniansk hospital.

The news is reminiscent of the appalling strike on the port city of Mauripol’s maternity ward earlier in the war.

Andriy Yermark, head of the Ukrainian presidential office, called Russian forces “terrorists” in a Telegram post condemning the hospital missile strike. He added that Russia would be held responsible for “every Ukrainian life.”

The missile volleys across Ukraine on Wednesday are part of an ongoing Russian campaign to take out critical infrastructure ahead of winter. This campaign against energy infrastructure began in October and has resulted in rolling blackouts impacting up to 10 million energy consumers at a time.

Yesterday, the World Health Organization called it a “life-threatening” winter that millions of Ukrainians would face after the missile strikes on the power grid and healthcare facilities have reduced the operational capabilities of hospitals.

In his Tuesday evening address, Ukrainian President Volodymyr Zelenskyy announced that “invincibility centers” would be set up throughout Ukraine. These centers would provide electricity, heat, water, internet, mobile phone connection, and a pharmacy 24/7 without any charge.

“If massive Russian strikes happen again and it’s clear power will not be restored for hours, the ‘invincibility centers’ will go into action with all key services,” Zelenskyy stated.

Ukrainian leaders have called the attacks on civilian infrastructure a “war crime.”

Russia denies intentionally targeting civilians with their strikes. Instead, they say the infrastructure attacks are meant to reduce Ukraine’s ability to fight.

The European Parliament designated Russia as a state sponsor of terrorism on Wednesday in response to repeated military strikes on energy infrastructure, hospitals, schools, and shelters. Considering the European Parliament has already placed harsh sanctions on Russia for the Feb. 24 invasion of Ukraine, the move is largely symbolic.

“I propose designating the European Parliament as a sponsor of idiocy,” Maria Zakharova, the Russian foreign ministry spokeswoman, wrote on Telegram in response.

Zelenskyy applauded the decision, saying on Twitter that Russia “must be isolated at all levels and held accountable” for terrorism policies.

He has previously pressed for the U.S. and other nations to designate Russia as a state sponsor of terrorism. However, despite resolutions in both chambers of Congress, U.S. Secretary of State Antony Blinken has not yet taken this step.