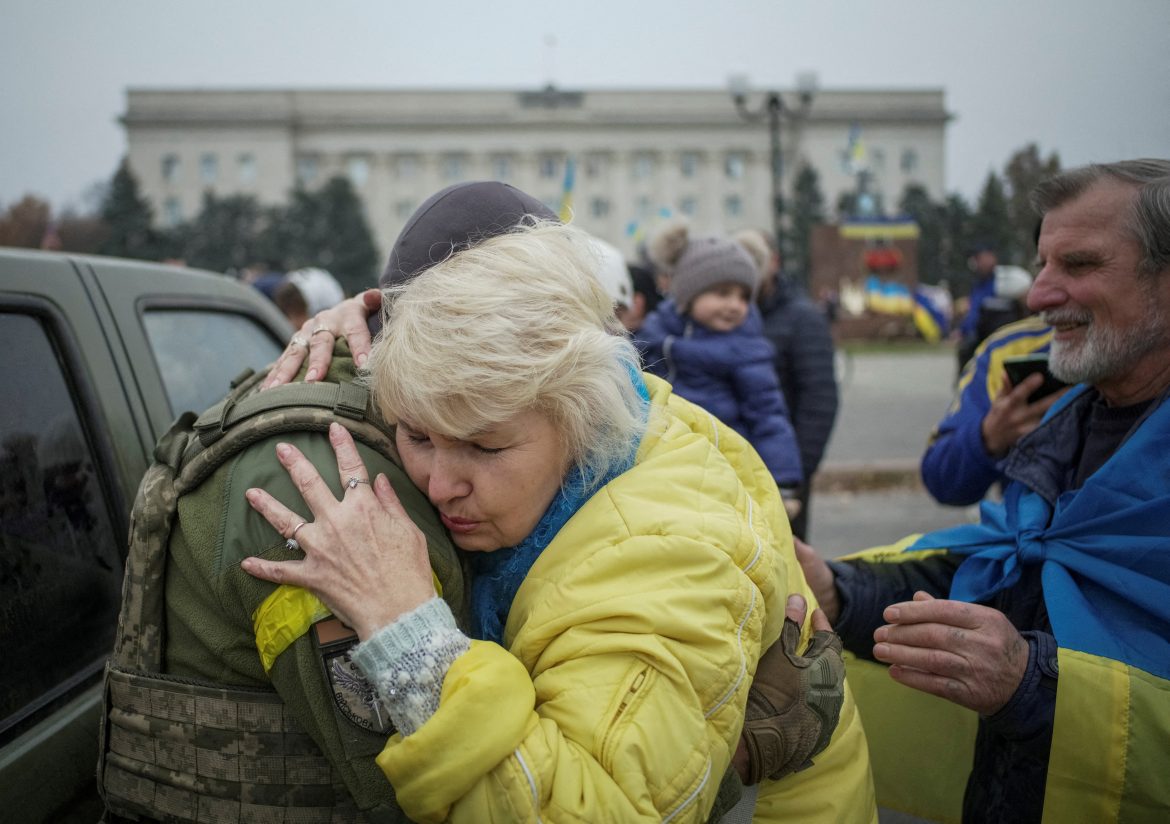 Ukraine’s President Zelenskyy said on Sunday that investigators had uncovered evidence of over 400 war crimes on the bodies of Ukrainian civilians and service members in areas of the Kherson region freed from Russian occupation last week.

“Bodies of dead civilians and servicemen have been found,” Zelenskyy stated. “The Russian army left behind the same savagery it did in other regions of the country it entered.”

Locals described living in terror after Russia captured Kherson in March, describing killings and abductions of Ukrainian civilians and the horrifying sounds of the agonized screams of detainees likely being tortured. Russia has repeatedly denied that its troops intentionally target civilians; however, mass graves and bodies bearing signs of torture in once-occupied cities and villages throughout Ukraine tell a different story.

Along with the disturbing news came widespread celebrations, with locals expressing ebullience over the end of the Russian occupation as they greeted Ukrainian soldiers with cheers.

Joy over their restored freedom after more than eight harrowing months of Russian occupation was further enhanced by the humiliation of Russian President Vladimir Putin over the military retreat from the region that for months served as his crowning achievement in the war.

Zelenskyy announced that “stabilization and the restoration of law” had been established in 225 settlements as of Monday.

“This is the beginning of the end of the war,” he told troops standing in formation in front of the administration building in the city’s main square with civilian men, women, and children cheering and waving Ukrainian flags.

“We are ready for peace, but our peace for our country,” Zelenskyy said, also thanking NATO and other allies for their continued support, including the U.S. for supplying long-awaited air defense systems that arrived in the country last week.

“This war took the best heroes of our country,” President Volodymyr Zelensky of Ukraine said during an unannounced visit to the newly liberated city of Kherson. “That’s why we are going forward.”https://t.co/ZxARX7HqcP pic.twitter.com/qWc9nJN9Sq

Russia’s demoralizing retreat last week from Kherson produced a rare public rift among Putin’s allies. Some have defended what they have called a strategic withdrawal while others have derided the decision as a symbol of weak leadership.

Among the more surprising critics was Russian nationalist Alexander Dugin, the man referred to as “Putin’s brain” who has been one of the Russian leader’s key allies in supporting the war. Dugin, in an angry tirade aired on state television, accused Putin of abdicating his responsibility to defend Russian cities, in reference to Kherson which was one of four regions annexed by Russia last month.

In the next breath, Dugin chillingly referred to a Russian story about a king who was killed for failing his people, in what appeared to be a veiled threat towards Putin.

Pro-Russian military analyst Boris Rozhin also described the retreat as the “murder of Russian hopes,” as translated by the Kyiv Post.

“This betrayal is scratched into my heart for ages,” said Rozhin.

The Russian newspaper Kommersant reported on Monday that talks are underway between Russian and U.S. officials in the Turkish capital of Ankara, citing an unnamed source, as tensions remain extremely high between Moscow and Washington over the war in Ukraine.

Kommersant did not provide details on the purpose of the talks but said the meeting had not been publicly announced beforehand.

The meeting, if indeed taking place, follows recent reports that Washington has been attempting to persuade Moscow and Kyiv to resume talks months after Ukraine pulled out of negotiations. Surprising victories of Ukrainian defenders against Russia’s military might has emboldened Ukraine’s Zelenskyy in his vow to continue fighting until all Ukrainian territories, including Crimea, are restored and until Russia pays for its war crimes and destruction.

The Kremlin said on Monday that discussions held last week with the United Nations to extend a deal safeguarding the shipment of grain from Ukrainian ports had been “fairly constructive.”

Top U.N. officials met a Russian delegation in Geneva on Friday to discuss sticking points in the July agreement that lifted a Russian blockade of Black Sea ports, averting a global food crisis at the 11th hour.

“There were talks with the U.N. last week, fairly constructive talks. We have our interest in this deal, which was originally part of the whole mechanism of the deal,” Kremlin spokesman Dmitry Peskov told reporters on Monday.

Among its list of demands, Moscow wants full access to world markets for its food and fertilizer exports in return for agreeing to extend the Black Sea deal set to expire on Nov. 19.