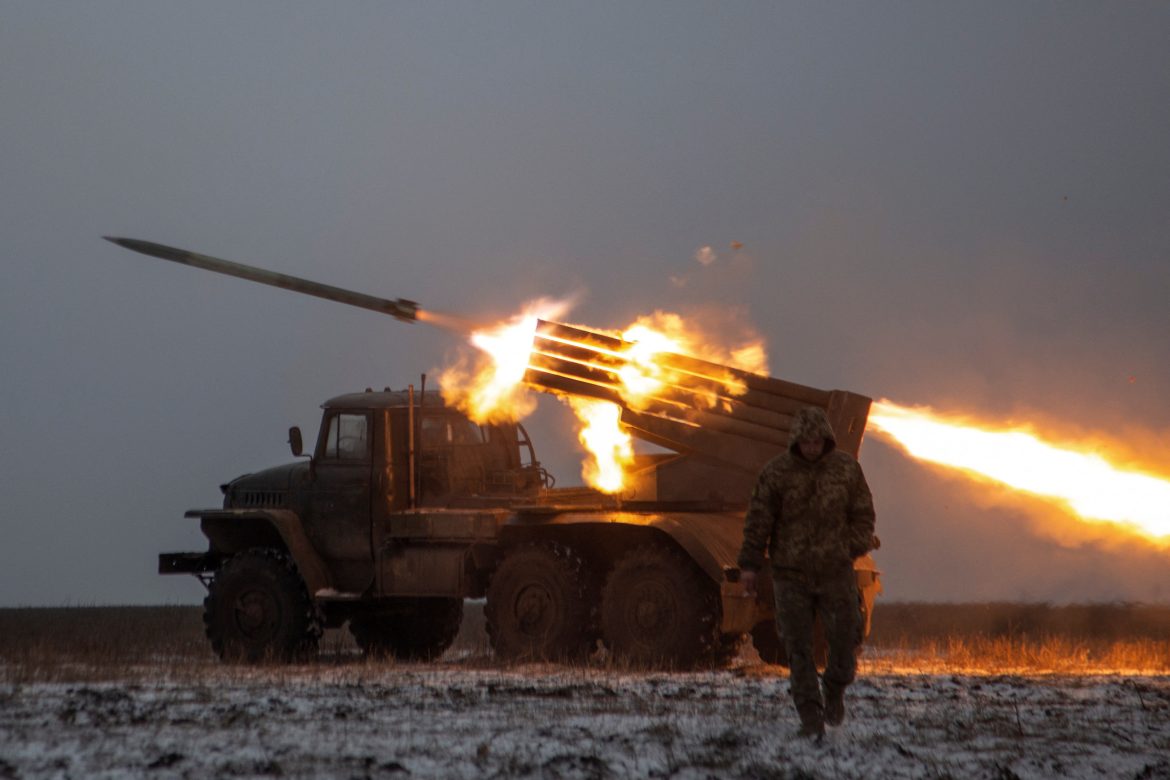 Control of the embattled city of Soledar in the Donetsk region of eastern Ukraine remains in question, where Russian claims of “liberating” the city continue to be met with corresponding denials by Ukraine.

Updated maps of the city posted by both the Institute for the Study of War (ISW) and the United Kingdom’s Ministry of Defense continue to list Soledar as “contested.”

Russia on Friday, and again Tuesday, claimed to have captured Soledar in its bloody offensive led by members of the notorious paramilitary unit, the Wagner Group.

UKRAINIANS ARRIVE IN US FOR PATRIOT SYSTEM TRAINING

Between 90 and 100 Ukrainian troops arrived at the Fort Sill Army base in Oklahoma Monday to begin training on the use of the U.S.-made Patriot missile system, CNN reported. The U.S. pledged to provide Ukraine with the long-range aerial defense system last month.

Fort Sill is home to the Fires Center of Excellence, where the U.S. trains its own military on the use of the system.

“The same instructors who teach U.S., allied, and partner nations will conduct the Ukrainian training, and these classes will not detract from the ongoing training missions at Fort Sill,” the base said in a statement to CNN. Training is expected to last “several months,” given the complexity of the system.

The Patriot training coincides with the U.S. military’s expanded “combined arms” combat training of Ukrainian forces at Germany’s Grafenwoehr training facility, where some 600 Ukrainian troops arrived on Sunday, per The Associated Press. U.S. Army Gen. Mark Milley, chairman of the Joint Chiefs of Staff, traveled to the Grafenwoehr facility Monday, where he visited with the Ukrainian troops.

“This is not a run-of-the-mill rotation,” Milley told commanders. “This is one of those moments in time where if you want to make a difference, this is it.”

“The exercise is purely defensive in nature,” Pavel Muraveyko, first deputy state secretary of Belarusian Security Council, said on the Telegram messaging app Sunday, according to a Reuters report. The Security Council added: “It will be a set of measures to prepare our and Russian aviation to carry out the relevant combat missions.”

Despite these claims, the West suspects that Moscow is pressuring Minsk to join its war on Ukraine.

The joint drills will include “aerial reconnaissance, deflecting air strikes, air cover of important objects and communications,” Muraveyko added. The exercises are expected to last throughout the month of January.

Elsewhere in Ukraine, the death toll from a Russian strike on a nine-story Dnipro apartment building has risen to 44, with five children counted among the dead, Kyiv officials said on Tuesday.

Ukrainian President Volodymyr Zelenskyy vowed to bring those responsible for the strike to justice.

“This strike at Dnipro, as well as other similar strikes, falls, in particular, under the jurisdiction of the International Criminal Court,” Zelenskyy said in his Monday night video address.

“And we will use all available opportunities — both national and international — to ensure that all Russian murderers, everyone who gives and executes orders on missile terror against our people, face legal sentences. And to ensure that they serve their punishment,” he said.

The deadly strike prompted an international outcry over Russia’s continued brutality against Ukrainian civilians, as well as the abrupt resignation of one of Zelenskyy’s top advisors.

Oleksii Arestovich came under a barrage of criticism for claiming on Saturday that Ukrainian forces had actually shot down the Dnipro missile, a statement critics said undercut Russia’s culpability in the attack.

In tendering his resignation, Arestovich apologized for the remark, calling it “a fundamental mistake.” Ukraine’s air force had stressed that the country’s military did not possess a system capable of downing Russia’s Kh-22 missiles, which it said was the type of missile used in the Dnipro strike.

“Since the beginning of Russia’s military aggression, more than 210 missiles of this type have been launched on the territory of Ukraine. Not one was shot down by means of anti-aircraft defense,” the air force said Saturday.

The U.K. Defense Ministry said Tuesday that Russia had likely targeted a power grid in the Dnipro strike, noting that the Kh-22 “is notoriously inaccurate when used against ground targets as its radar guidance system is poor at differentiating targets in urban areas.”

More than 9,000 civilians, including 453 children, have been killed in Ukraine since Russia’s invasion last February, a senior Ukrainian presidential aide said on Tuesday.