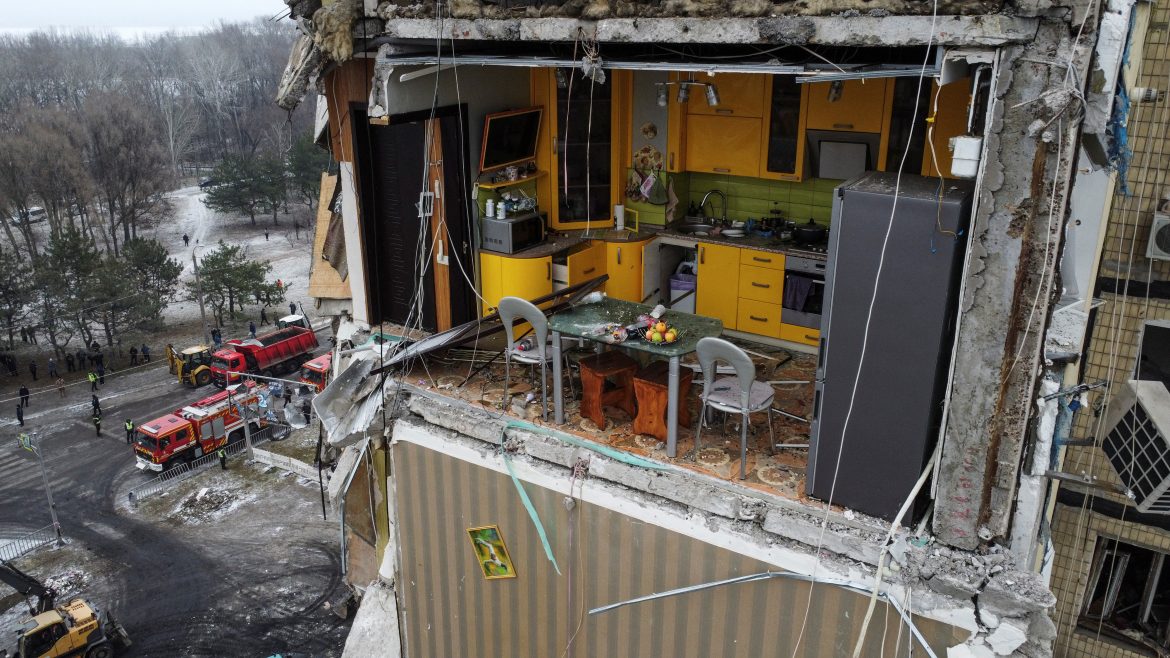 The death toll from a Russian missile strike on an apartment building in the southeastern Ukrainian city of Dnipro rose to 35 on Monday as rescue workers continued searching for survivors in the city located southeast of the capital of Kyiv.

Dnipro officials said that the multi-story building housed about 1,700 people before Saturday’s deadly attack, according to a report by The Associated Press.

President Zelenskyy said Sunday afternoon that at least 73 people were wounded and 39 had been rescued, as Dnipro government officials said 43 people were still missing.

“Search and rescue operations and the dismantling of dangerous structural elements continues. Around the clock. We continue to fight for every life,” Zelenskyy said.

Russia, which has repeatedly denied targeting civilians in Ukraine, acknowledged the missile strikes on Sunday without referencing the Dnipro apartment building.

The missile that hit the apartment building was a Kh-22 launched from Russia’s Kursk region, according to the military’s air force command, adding that Ukraine does not have a system capable of intercepting that type of weapon.

Ukrainian forces in Soledar have “almost certainly” maintained their positions in and around Soledar, despite weekend assaults from Russia’s mercenary Wagner Group, the U.K. Defense Ministry said in its daily intelligence update Monday. Russia’s Ministry of Defense on Friday claimed that its forces seized control of the city located in the Donetsk Oblast near Bakhmut.

The British intelligence report also noted that Ukraine’s armed forces continue to advance around Kremina in the east, another scene of intense ground fighting, and that “both Russia and Ukraine have achieved hard-fought but limited gains in different sectors” over the past several weeks.

US MILITARY TRAINING OF UKRAINIAN FORCES IN GERMANY

“This support is really important for Ukraine to be able to defend itself. And we’re hoping to be able to pull this together here in short order,” Milley said, according to The Associated Press.

The announcement marks a shift in U.S. involvement in the war which, until now, focused primarily on Ukraine’s immediate battlefield needs, as opposed to its long-term objectives.

Russia has produced the first nuclear warheads for its self-powered Poseidon super torpedoes, state-run media reported on Monday. Tass news agency said the warheads are being developed for deployment on the Belgorod nuclear submarine.

U.S. and Russian officials have both said that the Poseidon is a never-before-seen category of retaliatory weapon capable of triggering radioactive ocean swells that could essentially wipe coastal cities off the map.

“The first Poseidon ammunition loads have been manufactured, and the Belgorod submarine will receive them in the near future,” TASS reported, adding that the crew of Belgorod had already conducted successful tests using models of the torpedo.

German Defense Minister Christine Lambrecht resigned Monday amid mounting concerns over her inability to quickly revive the country’s armed forces amid the Russia-Ukraine war, despite a massive funding package directed toward that purpose.

“Today I asked the chancellor to dismiss me from the office of federal minister of defense,” Lambrecht, a member of German Chancellor Olaf Scholz’s Social Democratic Party (SPD), said in a statement, according to Reuters.

Lambrecht’s resignation follows a recent military drill in which several German Puma infantry tanks were put out of service during a military drill. It also comes as Germany faces increased international pressure to step up its military support for Ukraine.