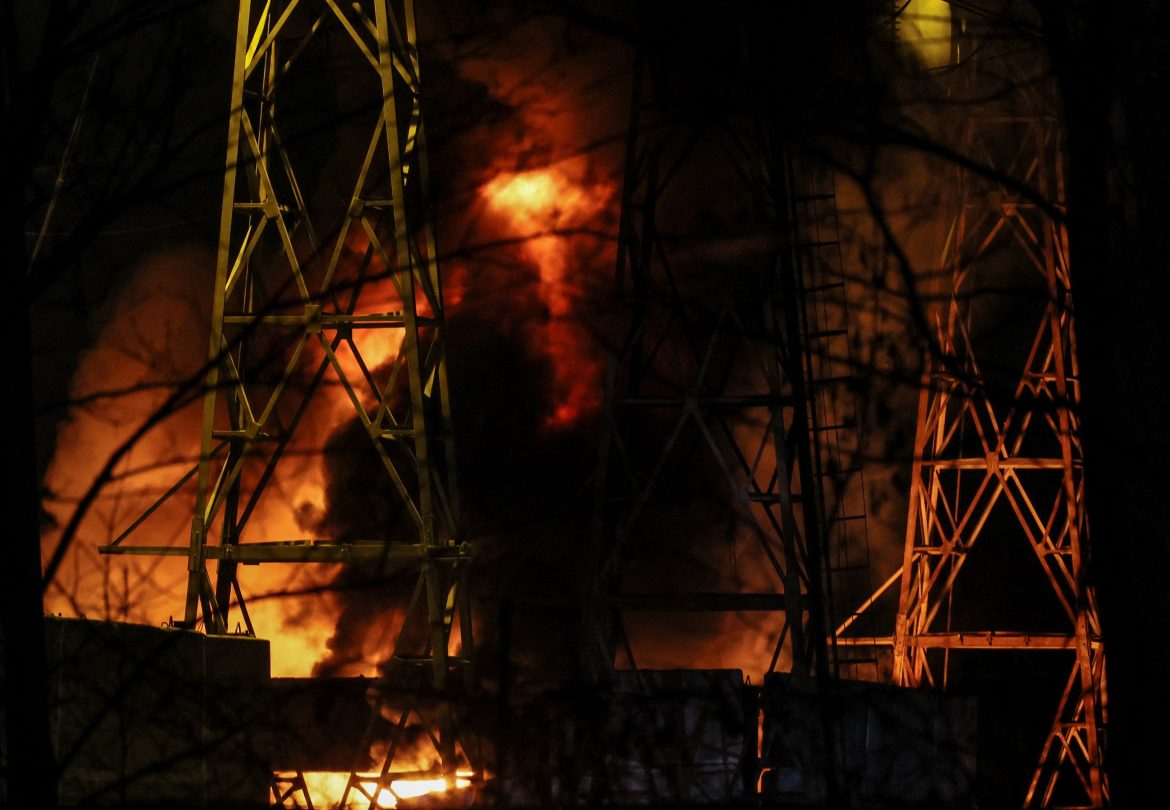 Ukraine’s capital city of Kyiv was pummeled with predawn drone strikes Monday, the day that marks the start of the Christmas holidays when Ukrainian children typically awaken to find their first Christmas gift tucked beneath their pillows. At least 23 self-exploding drones were launched at the capital, coming just three days after what Ukrainian officials described as one of Moscow’s largest assaults on Kyiv since the war began in February, The Associated Press reported.

Ukraine managed to shoot down 18 drones, its city administration said on Telegram. No major casualties were reported.

“This is how Russians congratulated our children on the holiday,” Serhii Kruk, the head of Ukraine’s State Emergency Service, wrote on Telegram, attaching photos of firefighters battling flames at an infrastructure facility that was struck in the attack.

“In the night when everyone is waiting for a miracle, the terrorist country continues to terrorize the peaceful Ukrainian people,” Ukraine’s human rights chief, Dmytro Lubinets, also remarked.

While Russia continues targeting Ukraine’s energy infrastructure, Ukrainian forces have become increasingly successful in shooting down incoming missiles and drones, thanks, in large part, to Western-supplied air defense systems. Ukraine’s air force said it was able to destroy 30 of around 35 drones Russia launched from the eastern side of the Azov Sea on Ukraine’s southeast coast overnight.

Firefighters and engineers are working around the clock to put out fires from the attacks on the energy infrastructure and restore power to the citizens of Ukraine’s capital. According to a Ukraine news agency, more than 50% of Kyiv residents are without power, heat, and water due to the bombings while temperatures plunged to negative 8 degrees overnight.

The State Emergency Service showed how they dealt with the consequences of the drone attacks on the infrastructure of #Kyiv. pic.twitter.com/xvIa9hUn4U

The U.S. is expected to announce in the coming days that it will send Ukraine Patriot missile systems to aid in its air defense. The West has already provided Kyiv with advanced air defense systems, but Ukraine insists that more are needed, not only to intercept continued Russian strikes on key infrastructure but to also prevent Moscow from achieving air superiority along the frontline.

Justin Bronk, a senior fellow at a London defense think-tank, said that Washington’s reluctance to provide Ukraine with the advanced Patriot batteries has likely been superseded by concerns that Iran could soon provide longer-range ballistic missiles to Russia, BBC News reported.

Russian President Vladimir Putin will make a rare trip to Belarus Monday to meet with its authoritarian leader, Alexander Lukashenko, who has been a long-time ally of the Kremlin, most recently allowing Russian forces to use Belarusian territory to invade Ukraine.

Some analysts believe Putin has his eyes on stockpiles of Soviet-era weapons in Belarus’s custody, and Ukrainian officials have sounded the alarm that Russia is ramping up efforts to pull its neighbor into the conflict, The Hill reported.

While Russian and Belarusian forces conducted joint military exercises in October, Lukashenko has so far resisted direct involvement in the invasion once billed by Russia as a short-term special military operation. Lukashenko also appears to have become increasingly sensitive to what he referred to as “whispering” among his countrymen that “Russians are already walking and running the country.”

“I would like to emphasize this feature once again: no one, except us, governs Belarus,” Lukashenko said, according to remarks published by the presidential press service. “We must always proceed from the fact that we are a sovereign state and independent.”

Putin’s visit to Belarus will be his first state visit to the country in three years.

The two leaders are expected to discuss “key aspects” of their partnership as well as other international and regional issues, a statement from the Kremlin said.

Lukashenko said last week that economics will be the main focus of the meeting, but acknowledged that he and Putin will also discuss defense and security.

Russia’s eroding resources coupled with winter weather will likely delay any planned attack involving Belarus, according to the Washington-based think tank Institute for the Study of War.

“The capacity of the Russian military, even reinforced by elements of the Belarusian armed forces, to prepare and conduct effective large-scale mechanized offensive operations in the next few months remains questionable,” the think tank said in an assessment published Sunday.

It also concluded that “it is unlikely that Lukashenko will commit the Belarusian military (which would also have to be re-equipped) to the invasion of Ukraine.”