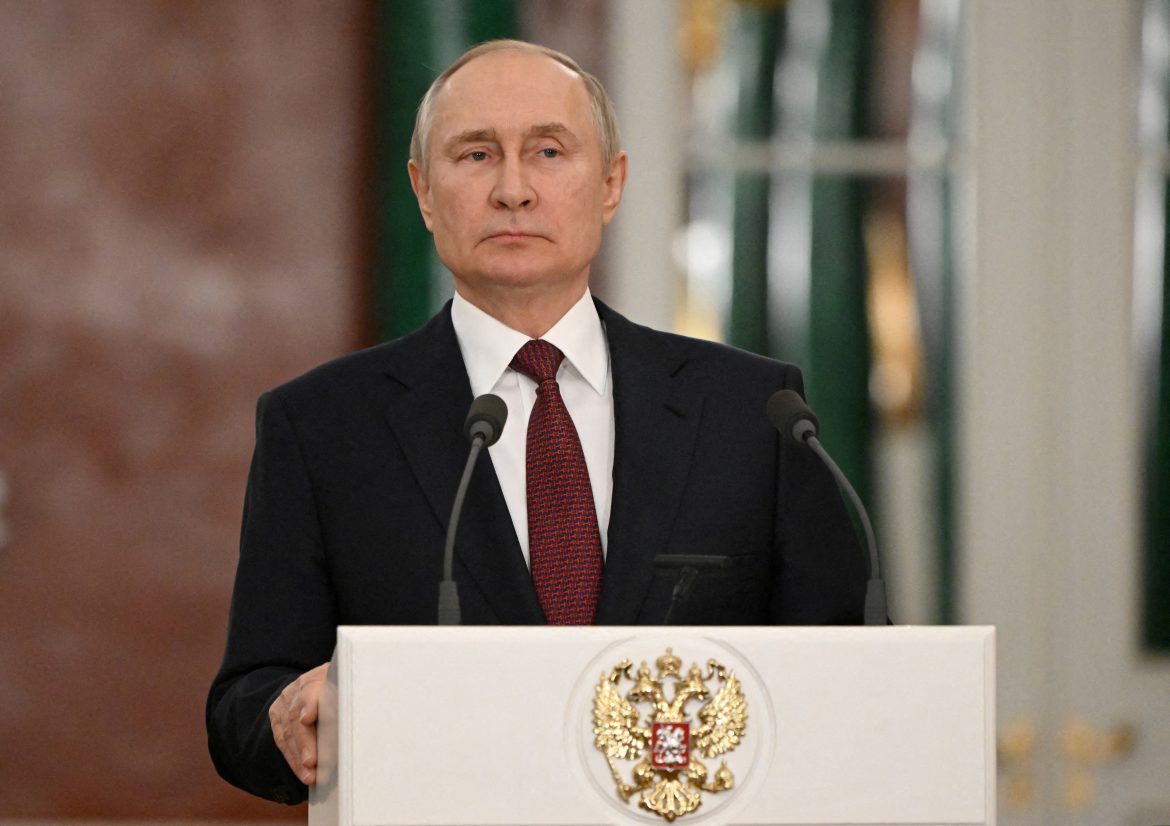 Russian President Vladimir Putin on Wednesday observed the launch of a warship armed with hypersonic missiles as it made its way toward the Atlantic Ocean, according to Reuters.

In a televised video conference with Defense Minister Sergei Shoigu and the frigate’s commander, Igor Krokhmal, Putin boasted that the ship was “equipped with the latest hypersonic missile system — ‘Zircon’ — which has no analogs,” adding, “This is a hypersonic sea–based system.”

Zircon hypersonic missiles can travel up to nine times the speed of sound with a strike range of at least 620 miles, Putin said last month, as reported by Newsweek. Moscow used hypersonic missiles at least once in its invasion of Ukraine when Kinzhal missiles struck the port city of Odesa in March.

China leads the hypersonic missile technology and has conducted numerous tests and displays over the last year. Beijing denied reports that one test, conducted in October, involved a missile that circled the entire globe before successfully hitting its target.

The strides made in hypersonic weapons by adversarial countries amid growing geopolitical tensions have sent the U.S. scrambling to catch up.

Vice Admiral Johnny Wolfe, director of the Navy’s Strategic Systems program, told CNN in October: “Up until just recently, there hasn’t been a real driver for us to take that technology and put it into a weapon system. The need was not there. The need is now there, which is why we’ve got a sense of urgency to get after this.”

The U.S. Air Force conducted a prototype hypersonic missile test off the southern coast of California on Dec. 9 that reached about five times the speed of sound.

The Russian military said that unauthorized use of cell phones by Russian soldiers led to the deadly New Year’s Eve Ukrainian rocket attack on the facility where they were stationed, The Associated Press reported. The military also raised its death toll from 63 to 89 troops, though Ukraine, along with some Russian military bloggers, previously estimated the number to be closer to 400.

Gen. Lt. Sergei Sevryukov said in a statement late Tuesday that Kyiv’s forces were able to “determine the coordinates of the location of military personnel” in Makiivka through phone signals from within the barracks before launching the missile attack.

Sevryukov also vowed to punish officials responsible for their carelessness and said measures are already underway to “prevent similar tragic incidents in the future.”

British intelligence officials said Wednesday that Moscow’s “unprofessional” military practices likely increased the casualty rate in what is the deadliest attack in the 10-month war to date.

“Given the extent of the damage, there is a realistic possibility that ammunition was being stored near to troop accommodation, which detonated during the strike, creating secondary explosions,” the U.K. Ministry of Defense said in its assessment of the deadliest single attack in the 10-month war to date.

“The Russian military has a record of unsafe ammunition storage from well before the current war, but this incident highlights how unprofessional practices contribute to Russia’s high casualty rate,” the update continued.

UKRAINIAN FORCES HAVE RECAPTURED 40% OF TERRITORY

Zaluzhnyi said heavy combat continues along the active frontline in Ukraine’s east which stretches more than 900 miles, particularly in Donetsk and Bakhmut, where trench warfare and nonstop shelling have been ongoing for months.

“Every day, the Armed Forces fight not only for Ukraine but also for like-minded Europe, for preserving peace, security, and freedom in the whole world. And we will definitely win,” Zaluzhnyi said.

Police in the liberated Kharkiv Oblast said they have discovered 25 torture chambers so far. Regional Police Chief Volodymyr Tymoshko, who made the announcement on Monday, described the detention conditions of Ukrainian civilians as “inhumane.” The city, located in northeastern Ukraine, had been occupied by Russian forces since the beginning of the invasion last year and was liberated by Kyiv’s forces in September.