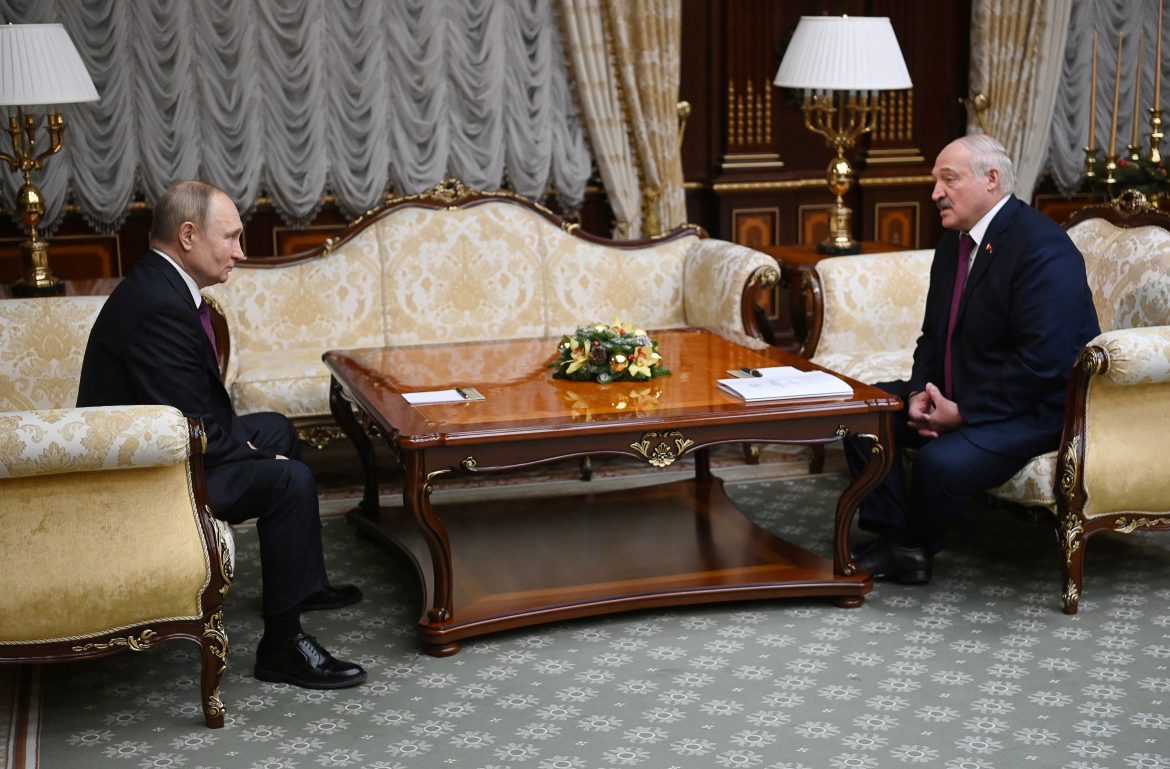 Russian President Vladimir Putin and his Belarusian counterpart Alexander Lukashenko lauded their close ties on Monday as Putin made his first visit to Minsk in three years.

Speaking at a joint press conference, the two leaders spoke on a wide range of subjects, from their economic and industrial ties to Sunday’s World Cup soccer final in Qatar, brushing over the Ukraine war.

Putin said he and his staunch ally discussed forming a “single defense space” in the region, The Associated Press reported.

Putin dismissed rumors that Russia seeks to absorb Belarus in response to a question from a reporter.

“Russia has no interest in absorbing anyone. It is simply not advisable today,” he said. “These unscrupulous critics from the outside either do not understand what they are talking about, or talk about it on purpose, misleading people who are not immersed in it. The issue is not a takeover. The issue is the coordination of economic policy,” he continued.

Whether there is veracity to the rumors or not, Lukashenko has become increasingly defensive against what he called “whispering” by critics who have reportedly said that “Russians are already walking and running the country.” The dictator, who has ruled as the country’s president since 1994, recently declared that “no one, except us, governs Belarus” in remarks published by the presidential press service. “We must always proceed from the fact that we are a sovereign state and independent.”

Ahead of the Minsk meeting, analysts suggested that Putin had his eye on stockpiles of Soviet-era weapons in Belarus as the 10-month conflict with Ukraine remains locked in a battlefield stalemate. Meanwhile, Lukashenko likely sought reassurances from Belarus’s largest trading partner amid his country’s economic woes.

Putin reiterated that Belarus is Russia’s closest ally. Belarus provided Russia with a launching pad for the invasion of Ukraine last February.

Ukrainian President Volodymyr Zelenskyy made an unannounced trip to Bakhmut on Tuesday where he met with military personnel. The eastern city, located roughly 380 miles east of Kyiv, has become the focus of some of the fiercest combat to date in the war. Bakhmut remains in Ukrainian hands, despite Moscow’s ongoing efforts to capture the region in its quest to seize control of Ukraine’s entire Donbas province.

Zelenskyy praised his troops for their “courage, resilience, and strength shown in repelling the enemy attacks.”

“Bakhmut Fortress. Our people. Unconquered by the enemy. Who with their bravery prove that we will endure and will not give up what’s ours,” he wrote on his Telegram channel.

Putin also praised his country’s military and security agencies during a Kremlin ceremony, where he presented awards to the Moscow-appointed heads of four regions of Ukraine that Russia illegally annexed in September.

“Our country has often faced challenges and defended its sovereignty,” Putin said. “Now Russia is again facing such challenge. Soldiers, officers, and volunteers are showing outstanding examples of courage and self-denial on the front line.”

Located in the annexed Donetsk province, Bakhmut’s capture would open a route for Russia’s military to advance toward Ukrainian strongholds in the region and also cut off key Ukrainian supply lines.

Electricity supplies in the Kyiv region were at a “critical” level on Tuesday following Russian missile and drone attacks overnight, Reuters reported.

Governor Oleksiy Kuleba said 80% of the region was without electricity for a second consecutive day after Russian drones hit additional energy infrastructure on Monday, the latest in a series of attacks targeting Ukraine’s power facilities that began in October.

“The situation with electricity supplies remains critical,” Kuleba said on the Telegram messaging platform. “I want to stress that with every shelling by the enemy, the complexity and duration of the repairs increase.”

National power grid operator Ukrenergo said it could provide less than half the required consumption in the capital as locals were left without heat, light, water supplies, and mobile phone communication as temperatures again hovered around zero.

“Supplies to critical infrastructure are a priority. We expect that today we will be able to turn on equipment to enable the security of supplies to be increased, reduce the capacity deficit and connect more consumers,” Ukrenergo said.

Kyiv mayor Vitali Klitschko said that workers had been able to restore water supplies to a portion of the city.

The United Nations has estimated that about 50% of Ukraine’s energy infrastructure has been destroyed since Russia stepped up its attacks on power facilities in October.

In eastern Ukraine, the governor of occupied Luhansk, Serhiy Haidai, said Tuesday that the province was on the verge of a humanitarian catastrophe amid power outages also caused by Russian strikes.

Haidai told Ukrainian television Tuesday that local residents “are living in basements without heating, food or medication” and have to burn furniture to keep themselves warm as Russian forces continue targeting energy and infrastructure designed to leave citizens without electricity in the harsh winter months.

Elsewhere, Ukraine’s presidential office reported that at least five civilians were killed and eight wounded in Russian attacks across nine regions in the country’s southeast.

Pavlo Kyrylenko, the Ukrainian governor of Donetsk, said Tuesday that 19 cities and villages in the region were shelled by the Russian army within the last 24 hours.

In a bit of good news, two main subway stations in Kyiv reopened Tuesday for the first time since the February 24 invasion. The key hubs of Maidan Nezalezhnosti and Khreschatyk have been used as bomb shelters during Russian air raids.

“It’s the feeling that despite everything, we are returning to a routine that we were used to,” said 24-year-old passenger Denys Kapustin. “This is very important, very important.”