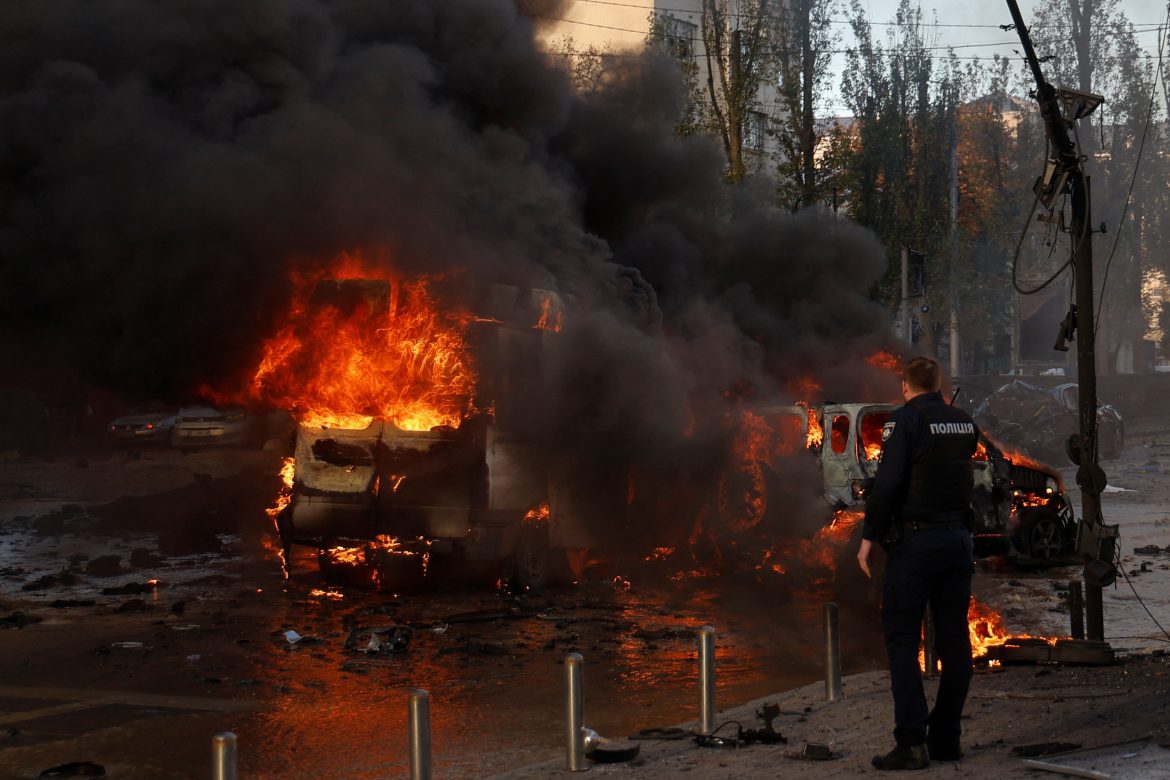 Russia fired cruise missiles at cities across Ukraine early on Monday in what President Vladimir Putin said was retaliation for a Ukrainian attack that badly damaged the Russian bridge to Crimea.

For the first time in months, Kyiv was hammered with Russian missiles that slammed into city streets filled with rush-hour commuters, killing civilians and cutting off power in Ukraine’s capital. One strike hit close to a children’s playground in a popular park.

Explosions also rocked cities and villages in Lviv, Ternopil, and Zhytomyr in western Ukraine, Dnipro and Kremenchuk in central Ukraine, Zaporizhzhia in the south, and Kharkiv in the east. Ukrainian officials said at least 10 people were killed and dozens more injured in the attacks that left multiple areas without power and water.

“The world once again saw the true face of a terrorist state that is killing our people,” Ukraine’s President Zelenskyy said after the attacks. “On the battlefield & in peaceful cities. A country that covers its true bloody essence & goal with talks about peace. It proves that the liberation of [Ukraine] is the only basis of peace & security.”

Zelenskyy said Monday’s rush-hour attacks were deliberately timed to kill as many civilians as possible — despite less than a dozen fatalities — and knock out Ukraine’s power grid.

“They are trying to destroy us and wipe us off the face of the earth,” the Ukrainian leader said on the Telegram messaging app. “The air raid sirens do not subside throughout Ukraine.”

Ukraine’s Defense Ministry reported that its air defenses shot down 43 of 81 cruise missiles launched by Russia in the attacks.

“The [R]ussian army only knows how to attack the civilian population,” Ukraine’s Ministry of Defense tweeted following the attacks. “They should learn how to fight from [Ukraine’s army]. To ensure that training is effective, they need to surrender.”

Putin said in a televised address broadcast over state-run media that he had ordered “massive” long-range strikes against Ukrainian energy and command and communication targets, with Kyiv forces firing missiles from land, air, and see in response to what he described as terrorist attacks in reference to Saturday’s explosion at the Kerch Strait bridge in Crimea.

“The Kyiv regime, with its actions, has put itself on the same level as international terrorist organizations. With the most odious groups. To leave such acts without a response is simply impossible,” Putin said, also threatening to unleash more strikes in the future if Ukraine hits Russian territory.

The barrage of deadly overnight strikes came two days after an explosion damaged the Kerch bridge built by Russia after it annexed Ukraine’s Crimea peninsula in 2014. The bridge — the longest in Europe — has been used by Russia to resupply its forces. Ukraine celebrated the strike on the Kremlin’s main supply route without directly claiming responsibility for the blast.

Russia’s latest attacks were praised by Ramzan Kadyrov, the pro-Kremlin leader of Russia’s Chechnya region who had in recent days called explicitly for the use of nuclear weapons in Ukraine and advised Putin to fire his military commanders.

“Now I am 100% satisfied with how the special military operation is being conducted,” Kadyrov said

“We warned you Zelensky, that Russia hasn’t even got started yet, so stop complaining … and run! Run away without looking back to the West,” he added.

The U.S., E.U., and Western allies and partners have condemned Russian threats to unleash nuclear weapons. President Biden sparked alarm last week when he warned that the U.S. is staring down “the prospect of Armageddon” for the first time since the 1962 Cuban Missile Crisis. The Pentagon attempted afterward to clarify the president’s remarks, saying officials “have not seen any reason to adjust our own strategic nuclear posture nor do we have indications that Russia is preparing to imminently use nuclear weapons.”

Since the beginning of September, Putin has faced a series of humiliating battlefield defeats and public setbacks, resulting in increased pressure from some of his staunchest backers and state television commentators to take stronger measures against Ukraine.

Elsewhere, Putin’s closest ally, Belarus President Alexander Lukashenko, announced on Monday that he had ordered troops to deploy jointly with Russian forces near Ukraine, claiming Kyiv and its Western backers are planning attacks on his country.

“Their owners are pushing them to start a war against Belarus to drag us there,” he said, without referencing any evidence to back the claim. Lukashenko allowed Belarus’s border with Ukraine to be used as a staging ground for Kremlin forces early in the war but, until this point, had not sent his troops to fight.