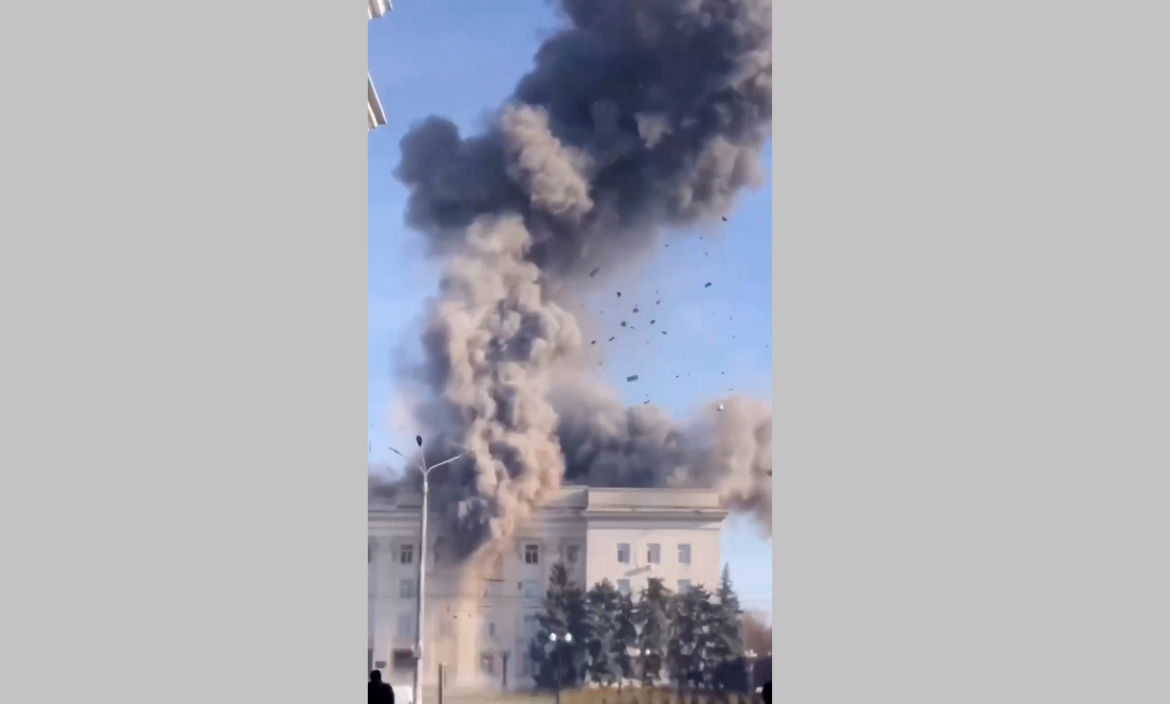 Ukraine recaptured Kherson from Russian forces on Nov. 11, prompting days of celebrations on the square that President Volodymyr Zelenskyy visited days later to hail the end of the Russian occupation.

Russian forces have been shelling Kherson from the opposite side of the Dnipro River since leaving the city and withdrawing from the western bank of the river.

Kyrylo Tymoshenko, deputy head of Zelenskyy’s office, said two floors of the building had been damaged, but that no one was reported hurt.

He posted images on the Telegram messaging app showing debris by the building and the ceiling of a corridor inside that had collapsed, bringing down the rubble. Some windows appeared to have been smashed, though the structure of the building looked intact.

An unconfirmed video circulating on Telegram showed a huge plume of smoke pouring up from the top of the administration building.

Kyiv Mayor Vitali Klitschko said explosions had rocked the city’s central Shevchenkivskyi district and that two administrative buildings had been damaged. An air raid alert was lifted three hours after it began.

In one Kyiv district, residents said they heard the sound of an Iranian Shahed drone — known as “mopeds” by Ukrainians because of the loud whirring of their engines — followed by a powerful explosion at a building next to their homes.

“I was already in the kitchen — I heard everything — I heard the buzzing ‘moped’ and I ran into the bathroom,” said Yana, 39, who had been getting ready for work.

“I want this all to be over … For (Russian President Vladimir) Putin, that bastard, to die. Those are the only emotions.”

One attack appeared to have ripped through a chunk of the roof of a nearby walled-off brick building. It was unclear what the building was used for.

Some of the windows of nearby residential buildings had been smashed. Bits of the roof were strewn in the snow along with other debris. Shocked residents, wrapped up against the cold, inspected the damage.

They said no one appeared to have been hurt.

The white tail of a drone could be seen in the wreckage. It had M529 Geran-2 written on it and a handwritten message “For Ryazan!!!”, an apparent reference to what Moscow says was a Ukrainian attack on an airstrip deep inside Russia this month.

Russia, which invaded Ukraine on Feb. 24 in what it calls a “special military operation” to “denazify” its neighbour, has unleashed barrages of missile attacks on energy infrastructure since October. Ukraine‘s grid operator said energy facilities had not sustained any damage in Wednesday’s attack.

Ukrainian Air Force spokesperson Yuriy Ihnat said the attack was deliberately timed for when it was dark to make it harder to shoot the drones down.

“The air defences worked well,” he said. “Thirteen (drones) were shot down.”

Ukraine has already received air defence systems from the West, including from the United States. The Patriot is considered one of the most advanced.

U.S. officials told Reuters an announcement on a decision on providing the system could come as soon as Thursday. The Patriot is usually in short supply, with allies around the world vying for it.

The Kremlin said on Wednesday that U.S. Patriot missile defence systems would be a legitimate target for Russian strikes against Ukraine if Washington authorised their delivery to Kyiv.

The Patriot system would help Ukraine defend against waves of Russian missile and drone attacks that have pounded the country’s energy infrastructure.

In the past 24 hours, it said, in the regions of Kharkiv, Donetsk, and Zaporizhzhia “the enemy launched 1 air and 11 missile strikes, 3 of them on civilian infrastructure … (and) launched more than 60 attacks from multiple rocket launchers”.

Millions of civilians enduring Europe’s biggest conflict since World War Two have had to contend with cuts to power, heat and water as sub-zero temperatures take hold.

Sergey Kovalenko, the head of the YASNO power company, said on Facebook that repairs continued on the electricity grid but that Kyiv still only had two-thirds of the power it needed.

A U.S. citizen was among dozens of detainees handed over to Ukraine in a prisoner exchange with Russia, the head of Ukraine‘s presidential administration said on Wednesday.

Andriy Yermak wrote on the Telegram messaging app that Suedi Murekezi had been “helping our people” before ending up in Russian custody.

Zelenskyy called on Russia this week to start withdrawing its troops from his country by Christmas as the first step towards a peace deal.

The Kremlin said on Wednesday it had not received any proposals about a “Christmas ceasefire” in Ukraine.

Ukraine‘s parliament has passed all the legislation sought by the European Union before Kyiv starts talks on joining the 27-member bloc, the assembly’s speaker said on Wednesday.

The European Commission, the EU executive, granted Ukraine the status of candidate member in June, despite Russia’s invasion, on the understanding that Kyiv takes a series of recommended legislative and policy steps.

“We can say with confidence that the Verkhovna Rada (parliament) has completed its part of the work and adopted all the necessary systemic bills to implement the recommendations of the European Commission,” Speaker Ruslan Stefanchuk said in a statement.

The European Commission has said it will monitor Ukraine‘s progress on carrying out the recommended steps and report on them by the end of 2022.

European Commission President Ursula von der Leyen said during a visit to Kyiv in September that she was impressed with the speed at which Ukraine was proceeding in its attempt to become a member state.

But the road to membership is widely expected to be long, possibly lasting a decade. EU leaders said in June that Ukraine and Moldova, which were granted candidate status the same day, would have much “homework” to do.

Ukrainian President Volodymyr Zelenskyy this week hailed the dissolution of a Kyiv court widely seen as corrupt as evidence that Ukraine can simultaneously fight corruption and Russia’s invasion.

But some experts in Ukraine said the legislation approved by parliament was only a starting point. Some of the laws would need revising and additional legislation will be required, they said.

“Kyiv really is demonstrating progress in satisfying all of the European Commission’s recommendations. But none of them has been fully implemented,” three experts from the Reanimation Package of Reforms, which groups non-governmental organisations and experts on reform, wrote in an article for online outlet Ukrayinska Pravda.