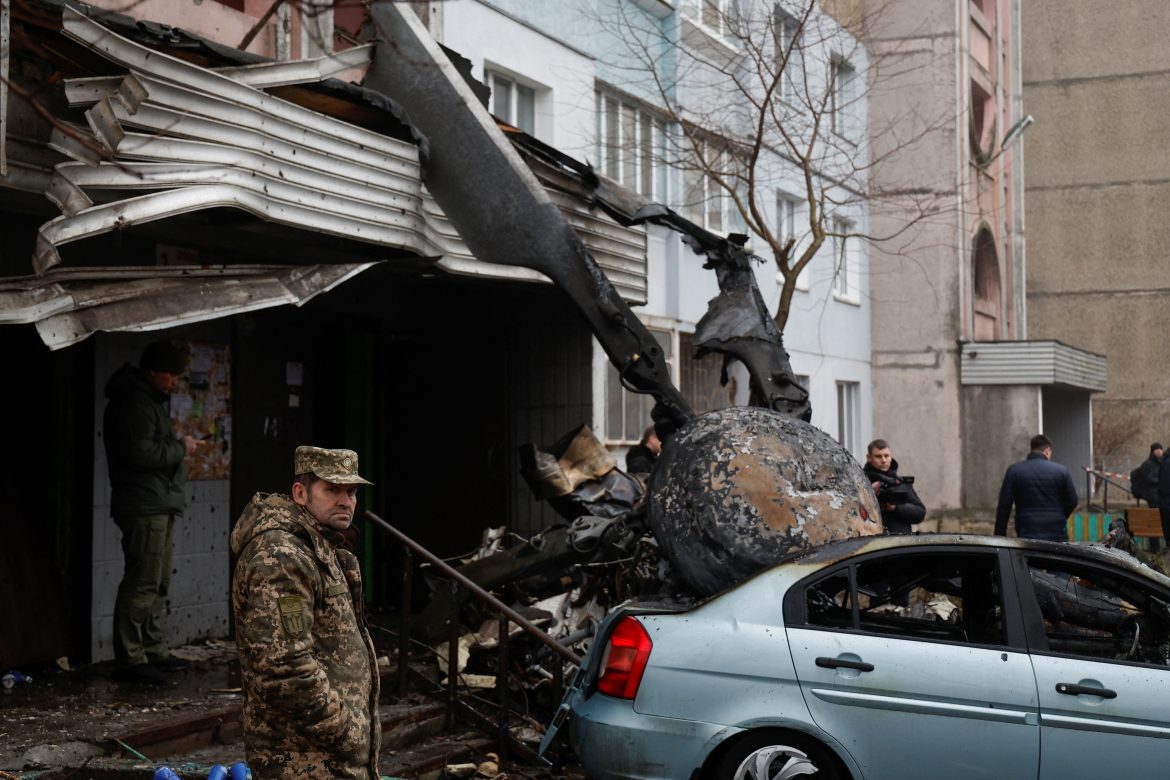 Three top Ukrainian officials were among 18 people killed in a helicopter crash in a Kyiv suburb Wednesday.

Interior Minister Denys Monastyrskyi, his deputy Yevhen Yenin, and State Secretary of the Ministry of Internal Affairs Yurii Lubkovych were killed in the crash, according to Ihor Klymenko, chief of Ukraine’s National Police, The Associated Press reported. It was not immediately clear whether the incident was accidental.

“For now, we are considering all possible versions of the helicopter crash accident,” Andriy Kostin, Ukraine’s prosecutor general, said on the Telegram messaging app.

Kyiv Regional Governor Oleksii Luleba said three children were among those killed in the crash in Brovary, a town just outside of Kyiv, adding that an additional 29 people, including 15 children, were injured. Earlier media reports indicated that the helicopter crashed near a kindergarten.

Kostin said that the investigation is being carried out by the Security Service of Ukraine.

The British Defense Ministry said late Tuesday that “Ukrainian forces had highly likely withdrawn from the Donbas town of Soledar, leaving Russian military and Wagner Group proxy forces in control.” The Ministry added that one of Ukraine’s two major supply routes into nearby Bakhmut is “now under increasing pressure” and that Ukrainian forces are probably moving to form “new defensive lines to the west.”

Ukraine had not commented on the situation in Soledar at the time of this report. Moscow asserted on Friday and Monday that it had “liberated” Soledar, but Kyiv maintained such claims were false.

Speaking at his annual news conference in Moscow, Lavrov weighed in on the ongoing tensions between Washington and Beijing over Taiwan, claiming that the U.S. isn’t powerful enough to stand against China on its own and has therefore been forced to “mobilize” the West.

NETHERLANDS TO JOIN US, GERMANY IN SUPPLYING PATRIOT SYSTEMS

Netherlands Prime Minister Mark Rutte said that his country will “join” efforts by the U.S. and Germany to train and arm Ukraine with a Patriot defense system at a meeting with President Biden at the White House Tuesday.

“We have the intention to join what you are doing with Germany on the Patriot project. I think that it’s important we join that,” Rutte told Biden.

“So, there are now three guaranteed batteries. But this is only the beginning. We are working on new solutions to strengthen our air defense,” Zelenskyy said.

U.S. Army Gen. Mark Milley, chairman of the Joint Chiefs of Staff, met with his Ukrainian counterpart, Gen. Valerii Zaluzhnyi, for the first time Tuesday at an undisclosed location near the Ukraine-Poland border. The two leaders have been in frequent contact throughout the 11-month war but had never met in person.

The Washington Examiner reported that U.S. Joint Staff spokesman Col. Dave Butler said in a readout that the two men “discussed the unprovoked and ongoing Russian invasion of Ukraine and exchanged perspectives and assessments. The Chairman reaffirmed unwavering support for Ukraine’s sovereignty and territorial integrity.”

The meeting came on the heels of Milley’s visit to the Grafenwoehr training facility in Germany Monday, where the U.S. military began training hundreds of Ukrainian soldiers on expanded combat training this week. The training is part of an overall increase in military assistance to Ukraine by the U.S. and a coalition of European nations.