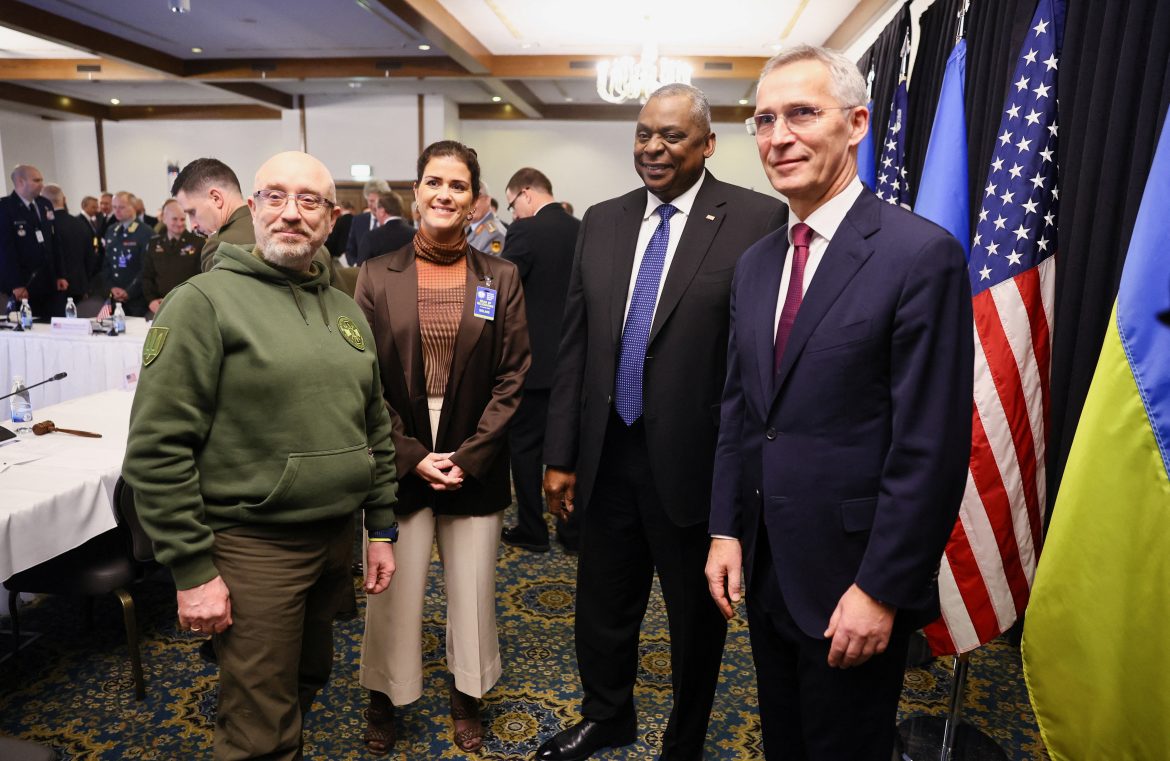 Around 50 defense leaders from around the world gathered at Ramstein Air Base in Germany Friday to discuss strategies and ongoing assistance for Ukraine in a meeting overshadowed by bickering between the U.S. and Germany over which country should provide Kyiv with battle tanks.

“This is a crucial moment. Russia is regrouping, recruiting, and trying to re-equip,” U.S. Defense Secretary Lloyd Austin said as the meeting opened, according to The Associated Press.

“We need to keep up our momentum and our resolve. We need to dig even deeper,” he continued.

President Zelenskyy, speaking live via video link, struck a note of impatience with the assembly over the feud, telling the gathering that “terror does not allow for discussion” and that “the war started by Russia does not allow delays.”

Germany has faced mounting pressure to supply Ukraine with some of its Leopard 2 tanks; however, in a game of “you go first,” Berlin insists that it will do so only if Washington sends in combat tanks first. The U.S., meanwhile, has said that it has no objections to Germany supplying the tanks but that, at present, “it just doesn’t make sense” for Washington to follow suit, Sabrina Singh, deputy Pentagon press secretary, told reporters Thursday at a press briefing.

“It’s more of a sustainment issue. This is a tank that requires jet fuel. . . .. The maintenance and the high cost that it would take to maintain an Abrams [tank] – it just doesn’t make sense to provide that to the Ukrainians at this moment,” she said.

The push and pull reflects the ongoing, high-stakes balancing act among Western nations that want to support Ukraine’s defense but fear the possibility of angering Russia.

Singh was asked during Thursday’s briefing to comment on a U.S. Coast Guard report from the previous day that it had spotted a Russian intelligence-gathering ship off the coast of Hawaii.

Singh said that she couldn’t provide additional insight but acknowledged that, while Russian vessels in U.S. waters is not a new phenomenon, this timing of the latest discovery is “precarious,” given the ongoing war and heightened tension between Moscow and Washington.

“But I would say that the Coast Guard is still — is monitoring this Russian vessel that we believe is an intelligence-gathering vessel but is operating in international and open waters,” Singh said before adding: “We haven’t seen any unsafe or unprofessional behavior, and we expect that the Russians will operate within the region in accordance with international law.”

The Department of Defense announced Thursday that the Biden administration authorized another $2.5 billion in security assistance for Ukraine which includes, for the first time, Stryker Armored Personnel Carriers (APCs). The latest package is the 30th Presidential Drawdown of equipment from U.S. weapons inventories since August of 2021.

Prior to Russia’s Feb. 24 invasion of its neighbor, few outside of the international intelligence community had ever heard of the Wagner proxy paramilitary group. Cloaked in mystery, the pro-Kremlin mercenaries operated in the shadows, first appearing on the public radar following a trio of foiled assassination attempts on Ukrainian President Zelenskyy.

The group’s involvement in the recent capture of Soledar in Ukraine’s Donetsk Oblast, however, suddenly thrust Wagner into the international spotlight which, in light of recent developments, appears to be exactly what the group’s leader, Yevgeny Prigozhin, intended.

The U.K.’s Defense Ministry recently noted that, while Wagner has existed since at least 2014, it was only in Sept. 2022 that Prigozhin acknowledged that he was the group’s founder. The following month, Wagner “opened a glossy HQ in St Petersburg,” according to the Ministry.

Prigozhin’s image recently popped up in a photo alongside Russian President Vladimir Putin that appeared to signal that he has been admitted into Putin’s inner circle of advisors and consultants.

British intelligence disclosed on Friday that Wagner “formally registered as a legal entity” on Dec. 22.

“The group declared their core activity as ‘management consultancy’; no mention was made of combat services,” the report continued, noting that “Wagner almost certainly now commands up to 50,000 fighters in Ukraine and has become a key component of the Ukraine campaign.”

The assessment concludes that the move “likely aims to maximize Prigozhin’s commercial gain and to further legitimize the increasingly high-profile organization.”