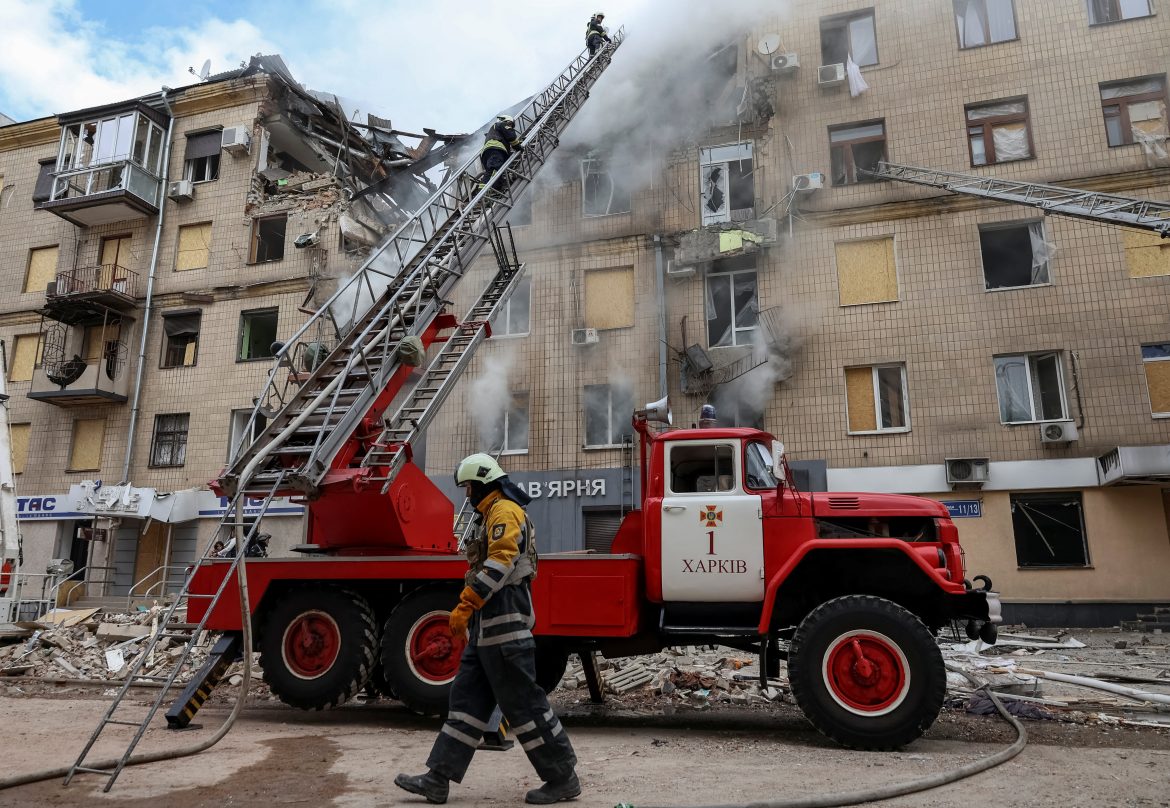 Ukrainian troops are quickly advancing toward a major railway hub used to supply Russian forces in the east following the collapse of a portion of Moscow’s front line that some military experts suggest signals a dramatic shift in the war.

Ukrainian President Volodymyr Zelenskyy in his Thursday evening video address announced that Ukrainian forces have reclaimed 385 square miles of territory in the east and south within the last week.

“Our heroes have already liberated dozens of settlements. And today this movement has continued.  There are new results. In total, more than 1,000 square kilometers of our territory have been liberated since September 1, 2022,” Zelenskyy said.

The Ukrainian general staff said in its Friday morning report that its forces had advanced almost 50 km (around 31 miles) in three days and that retreating Russian forces were trying to evacuate wounded personnel and damaged military equipment.

The Institute for the Study of War think tank wrote that the Ukrainian advances are causing troubles beyond the loss of territory as it is causing soldiers to lose trust in their superiors.

NEW: #Ukrainian successes on the #Kharkiv City-#Izyum line are creating fissures within the #Russian information space and eroding confidence in Russian command to a degree not seen since a failed Russian river crossing in mid-May.

U.S. Defense Secretary Lloyd Austin said on Friday that Ukrainian forces were having some success in their operations in Kharkiv and Kherson.

“We see success in Kherson now, we see some success in Kharkiv and so that is very, very encouraging,” Austin told a news conference with his Czech counterpart in Prague.

Meanwhile, a hospital in Ukraine’s northeastern region of Sumy was destroyed by a Russian airstrike Friday morning, wounding civilians.

“Russian aviation, without crossing the Ukrainian border, fired at a hospital. The premises were destroyed, there are wounded people,” Regional governor Dmytro Zhyvytskyi, said on Telegram, Reuters reported. The number of Ukrainians wounded in the strike was not disclosed.

The incident is the most recent example that Russia is purposefully targeting civilians despite the Kremlin’s insistence to the contrary. On Wednesday, a U.S. official said that there was significant evidence showing that hundreds of thousands of Ukrainian citizens had been forcibly deported to Russia in a “series of horrors” which include interrogations, strip searches, and torture, according to an AP report.

U.S. Ambassador Linda Thomas-Greenfield said that this included thousands of children, some who have been forcibly separated from their families and put up for adoption in Russia.

Elsewhere, the head of Ukraine’s atomic energy operator accused Russia on Thursday of trying to “steal” the Zaporizhzhia Nuclear Power Plant by knocking it off of Ukraine’s electric grid, creating the threat of an unprecedented radiation disaster, according to The Associated Press.

“We are trying to keep this unit running as much as possible, but eventually it will have to be shut down and then the station will switch to diesel generators,” Energoatom chief Petro Kotin told the news service. Kotin said that the diesel generators are “the station’s last defense before a radiation accident.”

Shelling has damaged sections of the plant, including the transmission lines that connect it to Ukraine’s power grid which is critical to the cooling systems that are in place to prevent a meltdown. Ukraine and Russia have blamed one another for the shelling.

The head of the U.N.’s International Atomic Energy Agency, Rafael Grossi, said this week that a safety perimeter around the plant must be established; otherwise, “something very, very catastrophic could take place,” he said.

Russian President Vladimir Putin and Turkish President Tayyip Erdogan plan to meet next week to discuss both leaders’ criticisms of the U.N.-brokered Black Sea grain deal. The leaders will meet in Uzbekistan sometime next week.

Putin on Wednesday said that he would seek amendments to the deal to ship millions of tons of agricultural products from Ukraine, the terms of which he claims have “cheated” Moscow and developing nations, ahead of November, when the pact is scheduled to be extended.

The Kremlin leader has complained that grain shipments are being sent to European and other wealthy countries – including those who have imposed sanctions on Russia – rather than to the developing nations who need them the most, a criticism Erdogan has echoed.

A U.N. spokesperson for the Black Sea Grain Initiative said on Wednesday that 30% of the agricultural products that have been shipped out of Ukraine so far have gone to low and lower-middle income nations; however, the UN also noted that “the export deal is a commercial – not humanitarian – operation, driven by the market,” according to Reuters.

As Russia threatens to cut off Europe’s gas flow, NATO Secretary-General Jens Stoltenberg sounded the alarm Thursday that Ukraine and its supporters should brace for a tough winter.

“We need at least to be prepared for this winter, because there is no sign of Russia giving up its goal of taking control of Ukraine,” Stoltenberg told The Associated Press on the sidelines of a U.S.-led Ukraine backers meeting in Ramstein, southwest Germany. This comes as Russia has repeatedly used its gas pipeline as leverage throughout the war, threatening to shut off one of the major gas supplies to Europe.

Stoltenberg urged Western populations to endeavor to bear up under the privations, saying that Ukraine’s recapture of Russian-held territories this month signals a critical point in the war.

“The war in Ukraine is approaching a pivotal moment where we see that the Russian offensive in Donbas has stalled. We see that the Ukrainians have been able to fight back, to strike back and regain some territory,” he said.

Queen Elizabeth remembered: a monarch who moved with a changing world