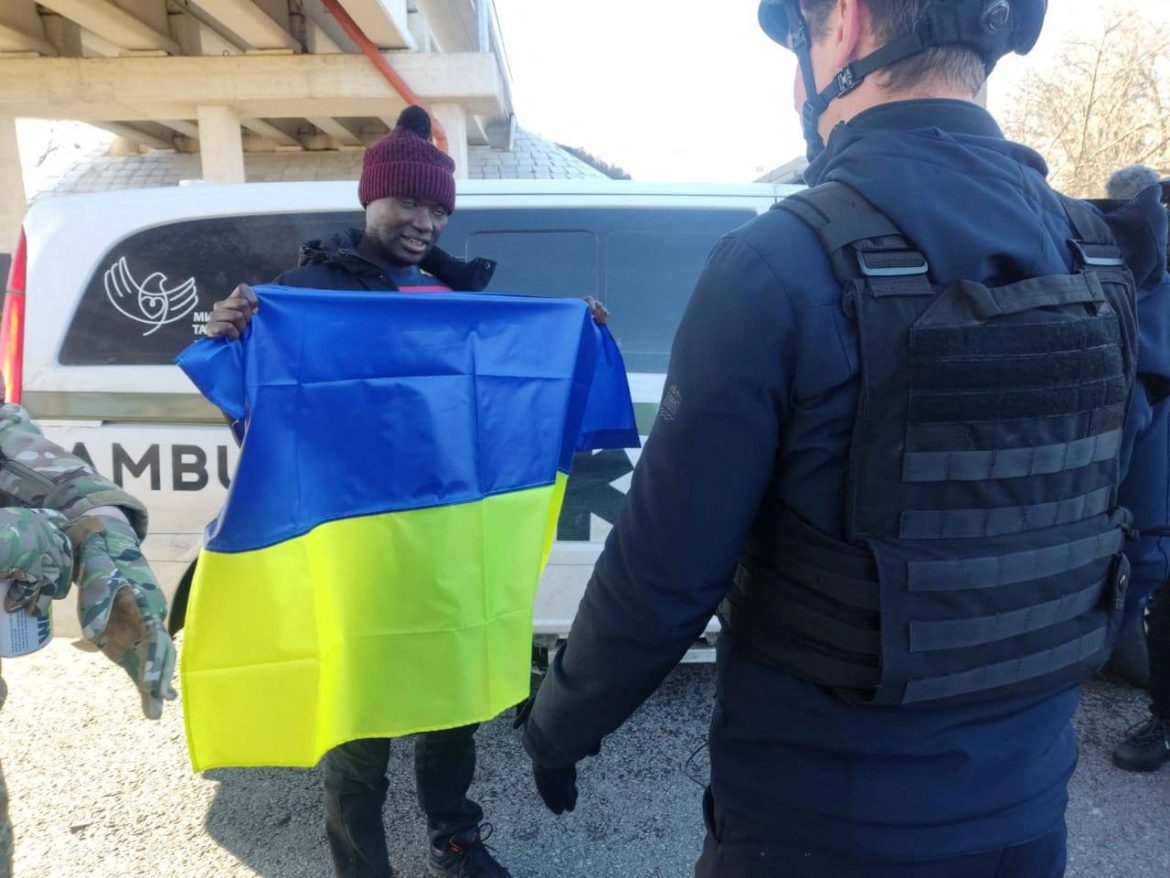 A U.S. citizen has been released by Russia as part of a prisoner exchange with Ukraine that involved dozens of detainees, the head of Ukraine‘s presidential administration said Wednesday.

Andriy Yermak wrote on the Telegram messaging app that Suedi Murekezi had been “helping our people” before ending up in Russian custody.

Reuters could not immediately reach Murekezi for comment. A British newspaper, the Guardian, last week quoted him as saying he was detained in June in the southern city of Kherson, which was occupied by Russian forces at the time.

He was released in late October after being held in various locations and had been living without documents in the city of Donetsk, which is controlled by forces backed by Russia, the Guardian said.

The Russian state news agency TASS reported in August that Murekezi had been charged in Donetsk with “inciting ethnic hatred” for protesting against Russia’s invasion of Ukraine.

Murekezi’s lawyer said he had become involved in those protests “by chance,” TASS reported.

RUSSIA WARNS US AGAINST PATRIOT MISSILES

The Kremlin said on Wednesday that U.S. Patriot missile defence systems would be a legitimate target for Russian strikes against Ukraine, should the United States authorize them to be delivered to support Kyiv.

Washington is finalizing plans to send the Patriot missile defence system to Ukraine, a decision that could be announced as soon as this week, three U.S. officials told Reuters on Tuesday.

Kremlin spokesman Dmitry Peskov said Patriots would “definitely” be a target for Russia, but that he would not comment on unconfirmed media reports.

The Patriot is considered to be one of the most advanced U.S. air defence systems, including against aircraft, cruise missiles, and ballistic missiles. It typically includes launchers along with radar and other support vehicles.

Russia’s embassy in Washington said the proposed transfer was provocative and could lead to unpredictable consequences.

If this is confirmed, we will witness yet another provocative step by the administration, which can lead to unpredictable consequences. Continued deliveries of arms will only strengthen the Zelensky regime’s sense of impunity and push it to new crimes against civilians in Donbass, Kherson and Zaporozhye regions.

The Pentagon says Russia’s recent surge in missile strikes in Ukraine is partly designed to exhaust Kyiv’s supplies of air defences so it can dominate the skies above the country. For that reason, the United States and its allies have been delivering more air defences for Kyiv.

For the United States, this has included NASAMS air defence systems that the Pentagon says have flawlessly intercepted Russian missiles in Ukraine. Washington has so far provided Ukraine with $19.3 billion in military assistance since the start of the conflict.

The International Olympic Committee President Thomas Bach said the Games have a unifying mission when he spoke to Ukraine President Volodymyr Zelenskyy, who called for a ban on Russian and Belarusian athletes, the IOC said on Thursday.

Zelenskyy had said on Wednesday after the call with Bach that he had opposed the idea of Russian athletes taking part under any kind of neutral banner at the 2024 Summer Olympics in Paris, as “all their flags are stained in blood.”

With the IOC edging towards including Russian and Belarus athletes at the 2024 Games as neutrals, Bach told Zelenskyy that the Olympics were not about exclusion.

“In the call, the Ukrainian President requested the full isolation of Russia and Russians from the world community,” the IOC said in a statement released on Thursday. “From his point of view, this must also apply to athletes.”

“In this context, the IOC president explained the unifying mission of the IOC and the Olympic Games enshrined in the Olympic Charter.”

“At the end of this open and constructive discussion, both presidents agreed to stay in contact.”

The United States Olympic and Paralympic Committee on Monday endorsed exploring the possibility of Russian and Belarusian athletes featuring in the Games, but said they must do so strictly as neutral competitors.

Bach had said last week that while IOC sanctions against Russia and Belarus remain in place, the “protective measures” of not letting their athletes compete in international competitions to protect the events’ integrity were another matter.

Since the Russian invasion of Ukraine in February, many sports bodies have moved events and suspended Russian teams or athletes while sponsors ended contracts in protest against the war.

The IOC had also recommended that events in Russia be cancelled or relocated and that Russian and Belarusian athletes not take part or compete under a neutral flag.

While events that count towards qualification in some sports for the Paris Olympics have already been held, most sports will stage their continental or global qualification events in the coming 18 months.

Russian and Belarusian participation in those events is still unclear.