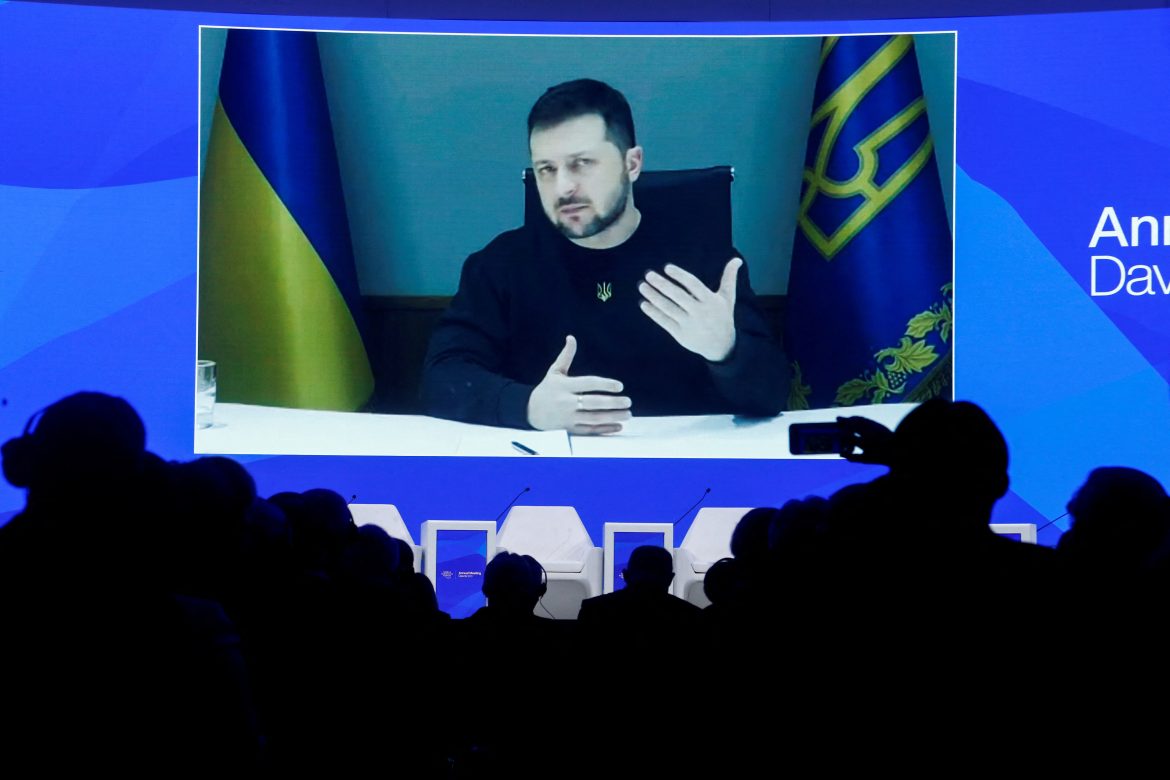 Ukrainian President Volodymyr Zelenskyy continued his ceaseless campaign for unending Western gifts Wednesday as he told political leaders at the World Economic Forum (WEF) meeting in Davos that Western weapons are not coming into Ukraine fast enough to help his country defend itself against Russia.

He urged them to speed up deliveries, because “tragedies are outpacing life; the tyranny is outpacing democracy.”

Zelenskyy, who addressed the elite assembly of globalist political and business leaders from Kyiv via video link, said that “[t]he supplying of Ukraine with air defense systems must outpace Russia’s vast missile attacks. The supplies of Western tanks must outpace another invasion of Russian tanks.”

He also called on the assembly to move more swiftly to address climate change, hunger, and global security, rather than taking the time to actually think anything out, adding that “the time the free world uses to think is used by the terrorist state to kill.”

During his speech, Zelenskyy asked for a moment of silence to honor the victims of a deadly helicopter crash near Kyiv on Tuesday that claimed the lives of more than a dozen people, including Ukraine’s interior minister. Although the cause of the deadly crash has not yet been determined, Zelenskyy said that “every individual, every death is a result of war.”

A probe into the tragedy in Kyiv is currently underway. The AP noted that there have been conflicting reports regarding the number of casualties, which appear to range somewhere between 12 and 14. Ukraine’s State Emergency Service said that, in addition to those who were inside the helicopter, a child on the ground had also been killed and that 25 people were injured, including 11 children. Several media outlets reported that the crash occurred near a kindergarten.

Many of the world’s most influential political and business leaders — including numerous U.S. Democrats and Republicans — as well as environmental activists, flock to Davos for the WEF meetings every year. The group is most well-known as the authors of the Great Reset agenda and for its leadership, notorious left-wing globalist influencers Klaus Schwab and George Soros.

Medvedev has repeatedly raised the specter of nuclear war throughout the 11-month conflict. However, his latest threat represents the first public acknowledgment that Russia could possibly lose the war, which suggests that the Kremlin is deeply concerned over increased weapons deliveries to Ukraine from the West.

“The defeat of a nuclear power in a conventional war may trigger a nuclear war,” Medvedev wrote on the Telegram messaging app. “Nuclear powers have never lost major conflicts on which their fate depends.”

As several NATO and other defense leaders prepare to meet in Germany Friday to discuss strategy and support for Ukraine, Medvedev advised them to consider the serious risks of their decisions.

Kremlin spokesman Dmitry Peskov later told reporters that Medvedev’s remarks were in keeping with Russia’s nuclear policy, which allows for a nuclear strike after “aggression against the Russian Federation with conventional weapons when the very existence of the state is threatened.” However, when asked if the latest threat signified a planned escalation of the war to a new level, Peskov replied: “No, it absolutely does not mean that.”

International Atomic Energy Agency (IAEA) flags were raised at all four of Ukraine’s nuclear power stations Wednesday, signifying a permanent presence of the U.N. nuclear watchdog agency at each of the sites. IAEA chief Rafael Grossi announced on Wednesday that teams of experts had been sent in to monitor each of the sites amid ongoing concerns about the potential of serious accidents.

The IAEA had already established a permanent presence at Ukraine’s Zaporizhzhia nuclear power plant — the largest in Europe — which is currently held by Russian forces. A team was also installed at the shuttered Chernobyl nuclear facility, the site of one of the deadliest nuclear accidents in the world.

“From tomorrow, there will be two flags at all of the nuclear facilities in Ukraine; one of Ukraine and the second of the international nuclear agency,” Ukraine’s Prime Minister Denys Shmyhal said Wednesday at a joint press conference with Grossi in Kyiv.

Russia appears to be poised to deploy some of its new T-14 Armata main battle tanks in Ukraine, Britain’s Defense Ministry said in its latest war assessment.

The Ministry noted that such a move would signify a “high-risk decision” for Moscow, given that production of the fleet has been fraught with delays and manufacturing problems. The Ministry said that a deployment, if it does occur, would be more symbolic than effective, adding that there are likely only around a dozen of the tanks that could be deployed. The T-14s are larger and heavier than those currently in use by Moscow’s forces, which also presents logistical challenges, according to the intelligence report.

The assessment was based on satellite imagery indicating that Moscow has been preparing for deployment of a small number of the T-14s.