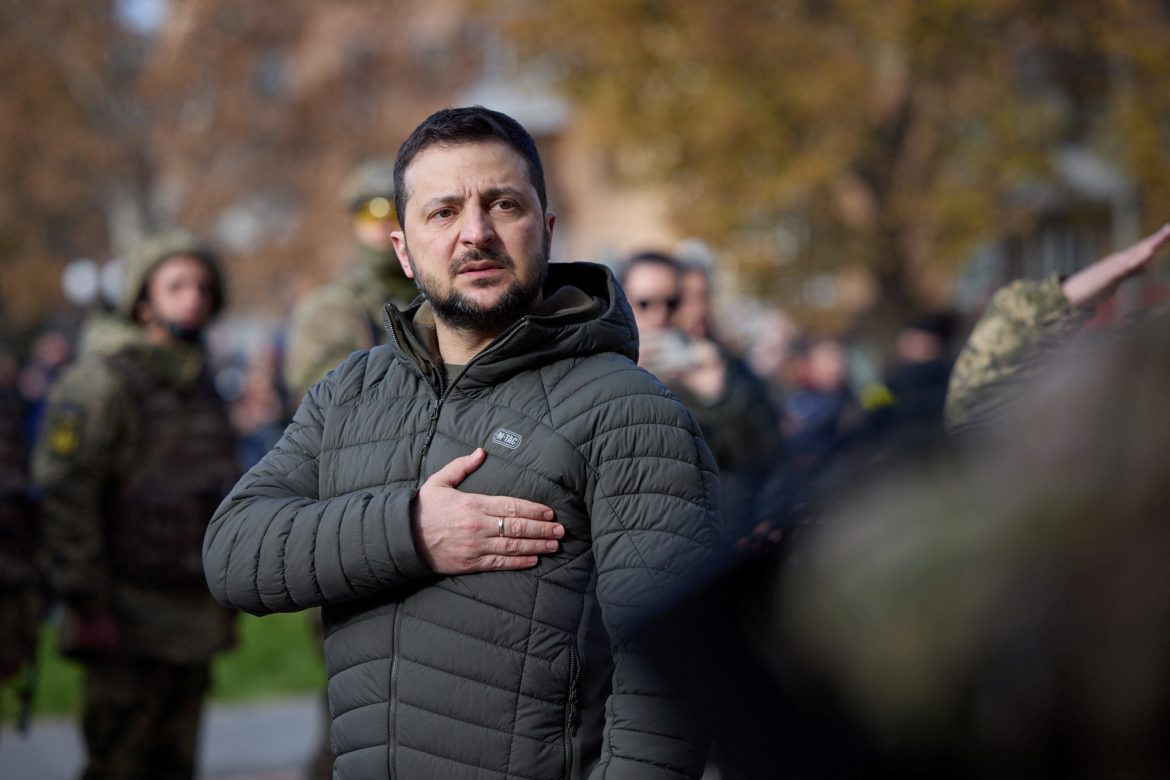 Ukrainian President Volodymyr Zelenskyy declared that the liberation of Kherson represents the “beginning of the end of the war” in a triumphant speech Tuesday following the retreat of Moscow’s forces in the southern region amid a grinding counteroffensive by Ukrainian defenders.

Zelenskyy awarded medals of honor to Ukrainian fighters, posing with them for selfies as he toured reclaimed city streets. Onlookers cheered the arrival of Ukrainian soldiers as they continued celebrating the end of nearly nine months of Russian occupation

“This is the beginning of the end of the war,” Zelenskyy said in remarks aired by state media outlets, ABC News reported. “We are step by step coming to all the temporarily occupied territories.”

The Ukrainian leader struck a more somber note when he acknowledged that fighting “took the best heroes of our country.”

The recapture of Kherson represents one of Kyiv’s most significant victories in the war thus far, though residents now face a brutal winter without heat, water, and electricity while supplies of food and medicine rapidly dwindle.

The Institute for the Study of War, a Washington-based think tank, acknowledged that Ukraine won “an important victory” in recapturing Kherson and other areas west of the Dnieper River, but also cautioned that “it has by no means liberated the minimum territory essential to its future security and economic survival.”

NATO Secretary-General Jens Stoltenberg separately warned that “we should not make the mistake of underestimating Russia” during a visit to The Hague on Monday.

“The Russian armed forces retain significant capability as well as a large number of troops, and Russia has demonstrated their willingness to bear significant losses,” Stoltenberg said.

President Zelenskyy and President Biden on Tuesday implored a summit of G20 leaders gathered in Bali, Indonesia not to ease up in pressuring Moscow over its invasion of Ukraine, The Associated Press reported.

On Tuesday, a draft declaration condemning Russia’s actions was distributed among leaders representing the world’s major economies at a time when Russia’s months-long war has rocked financial stability in Europe and the United States. While a majority of G20 leaders have publicly expressed unwavering support for Ukraine, a consensus on the matter would be nothing short of miraculous, since Russia and China are members.

“All problems are on the Ukrainian side that categorically refuses to hold any talks and comes up with conditions obviously unrealistic and inadequate to this situation,” he said at the summit.

Zelenskyy urged G20 leaders, which he referred to as “G19,” apparently eliminating Russia, to adopt a 10-point peace plan to end the war “justly and on the basis of the UN Charter and international law.”

“We will not allow Russia to wait out and build up its forces,” he said via video link to the summit, according to Reuters.

“I am convinced that now is the time when Russia’s war must and can be stopped.”

U.S. Central Intelligence Agency director Bill Burns warned his Russian counterpart against deploying nuclear weapons at a Monday meeting between the two spy chiefs, according to a White House National Security Council official, the Associated Press reported. The meeting between Burns and Russia’s SVR intelligence chief Sergei Naryshkin is the highest-ranking face-to-face meeting between top U.S. and Russian officials since before Russia invaded Ukraine on Feb. 24.

The official, who spoke on condition of anonymity, said Burns met with Naryshkin in Ankara, Turkey to discuss the release of detained U.S. citizens Paul Whelan and Brittney Griner. The official stressed that the two intelligence officials did not discuss a possible settlement of the war in Ukraine. Putin has repeatedly said Russia will defend its territory with all available means, including nuclear weapons, if attacked. He says the West has engaged in nuclear blackmail against Russia.

“[Burns] is not conducting negotiations of any kind. He is not discussing settlement of the war in Ukraine,” the spokesperson said.

“He is conveying a message on the consequences of the use of nuclear weapons by Russia, and the risks of escalation to strategic stability … He will also raise the cases of unjustly detained U.S. citizens.”

The official said that Ukraine was given advance notice of the trip, adding that “We firmly stick to our fundamental principle: nothing about Ukraine without Ukraine” — an oblique reference to recent reports that the U.S. had privately urged Ukraine to reenter peace talks with Russia.

The official did not elaborate further on the purported discussion between Burns and Naryshkin about nuclear warfare. National Security Adviser Jake Sullivan in late September warned Moscow of “catastrophic consequences” if it “crosses this line,” adding that the Kremlin had been advised, “in greater detail exactly what that would mean.”