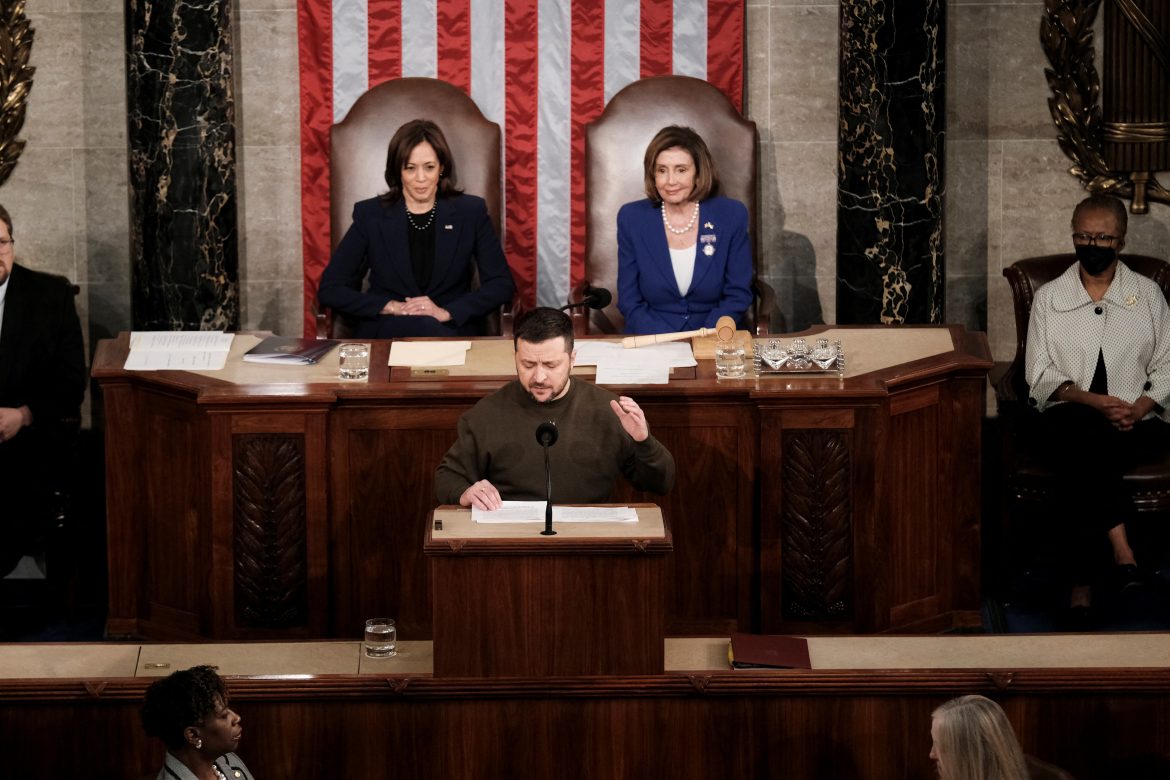 Ukraine’s President Zelenskyy was greeted with thunderous applause by U.S. legislators Wednesday in his defiant wartime visit to the nation’s capital. Some Democratic members of Congress waved a large Ukrainian flag as Zelenskyy entered the chamber.

Dressed in his signature military greens, Zelenskyy made use of his background as an actor, delivering a rousing speech during which the leader compared the war with Russia to America’s battle for independence. He thanked Congress and “every American” for the billions in aid Ukraine has received so far. The leader also struck a defiant note, declaring that “Ukraine holds its lines and we will never surrender.”

President Biden vowed to help Ukraine defend itself “for as long as it takes” during a joint press conference with the Ukrainian leader. Reading entirely from a scripted speech, Biden declared, “The United States is committed to ensuring that the brave Ukrainian people can continue to defend their country against Russian aggression as long as it takes.” The president also denounced Russia for targeting Ukraine’s civilian infrastructure and energy grid.

“It’s the latest example of the outrageous atrocities the Russian forces are committing against innocent Ukrainian civilians, children, and their families,” Biden said.

Zelenskyy’s trip coincided with the announcement of the largest U.S. arms delivery to Ukraine so far in the 10-month conflict which includes long sought-after Patriot surface-to-air missiles. It also came as Congress is poised to vote on a $1.7 trillion spending package that includes $45 billion in additional aid to Ukraine. U.S. military and monetary aid to Ukraine have reached about $48 billion to date – well beyond what any other country has given so far in the conflict.

Fracturing GOP support for the Biden administration’s unfettered spending on Ukraine was underscored by Reps. Lauren Boebert (R-Colo.) and Matt Gaetz (R-Fla.) who both withheld their applause amid several standing ovations by their colleagues during Zelenskyy’s speech. A day prior, Senate Minority Leader Mitch McConnell said that helping Ukraine defeat Russia “is the number one priority for the United States right now, according to most Republicans,” The Post Millennial reported.

With Republicans only weeks away from taking control of the House, Zelenskyy said continued support for Ukraine is vital not just to his country’s freedom, but to freedom around the world.

“Your money is not charity. It is an investment in the global security and democracy that we handle in the most responsible way,” Zelenskyy said.

While Biden and Zelenskyy presented a united front against Russian aggression, an awkward moment came when a reporter asked the Ukrainian leader what “just peace” with Russia would look like, referring to Biden’s earlier remark that Ukraine seeks “just peace” in ending the war.

“For me as a president, ‘just peace’ is no compromises,” Zelenskyy responded, echoing similar remarks he made last month following a report that the Biden administration had been quietly pushing Kyiv to negotiate an end to the conflict with Russia. Zelenskyy has refused to back down from his stance that his forces will not stop fighting until every occupied inch of territory is restored to Ukraine, including the Crimean Peninsula annexed by Russia in 2014.

Zelenskyy said many Ukrainians are living now “for the sake of vengeance” and that the war will only end when his country’s sovereignty, freedom, and territorial integrity are restored and Russia is made to pay “for all the damages inflicted” on the Ukrainian people.

In a call with reporters, Peskov said the Patriot shipment “is not conducive to a speedy settlement, quite the contrary. And this cannot prevent the Russian Federation from achieving its goals during the special military operation,” he continued.

Peskov said that there had been no calls for peace or signs of willingness to “listen to Russia’s concerns” during Zelenskyy’s visit, which he claimed proves that the U.S. is fighting a proxy war with Russia “to the last Ukrainian.”

Russian President Vladimir Putin promised Wednesday to give his military whatever it needs to succeed in the conflict with Ukraine. The Kremlin leader said he approved a plan proposed by Russian Defense Minister Sergei Shoigu to expand Moscow’s armed forces by more than 30% in the near future.

Shoigu said that increasing the number of armed forces from 1.15 million to 1.5 million is necessary “to guarantee the solving of problems related to Russia’s military security.” His plan includes the addition of 695,000 professional contracted soldiers, as opposed to conscripts serving mandatory military service.

Putin also unveiled plans to add new weapons to Russia’s arsenal. Speaking at a televised meeting with senior military officers, Putin said that the Kremlin plans “to build up our defense capability, commissioning hypersonic, laser and other new weapons systems that other countries don’t have.”

The Russian leader claimed that the new weapons systems are designed to “ensure our security in view of the growing threats,” stressing that they are “not a reason to threaten anyone.”

Tracy is a career member of the Foreign Service and previously served as ambassador to Armenia. Senate Majority Leader Chuck Schumer (D-N.Y.) said Tracy “will be tasked with standing up to Putin.”

Tracy inherits an embassy in Moscow that has been decimated in terms of staffing amid crumbling U.S.-Russia relations over the war in Ukraine. The previous U.S. ambassador to Moscow, John Sullivan, left Russia in early September. His departure was expected but came early as he rushed home to be with his gravely ill wife who was battling advanced cancer. She passed away a day after he returned to the U.S.

Elsewhere on the battlefield, Ukraine’s military said late Wednesday that Russian forces attacked targets in the Zaporizhzhia region and continued pressing their advance toward the embattled eastern towns of Bakhmut and Avdiivka in the Donetsk region. The frontline region has become the focal point of some of the most intense fighting of the war so far.