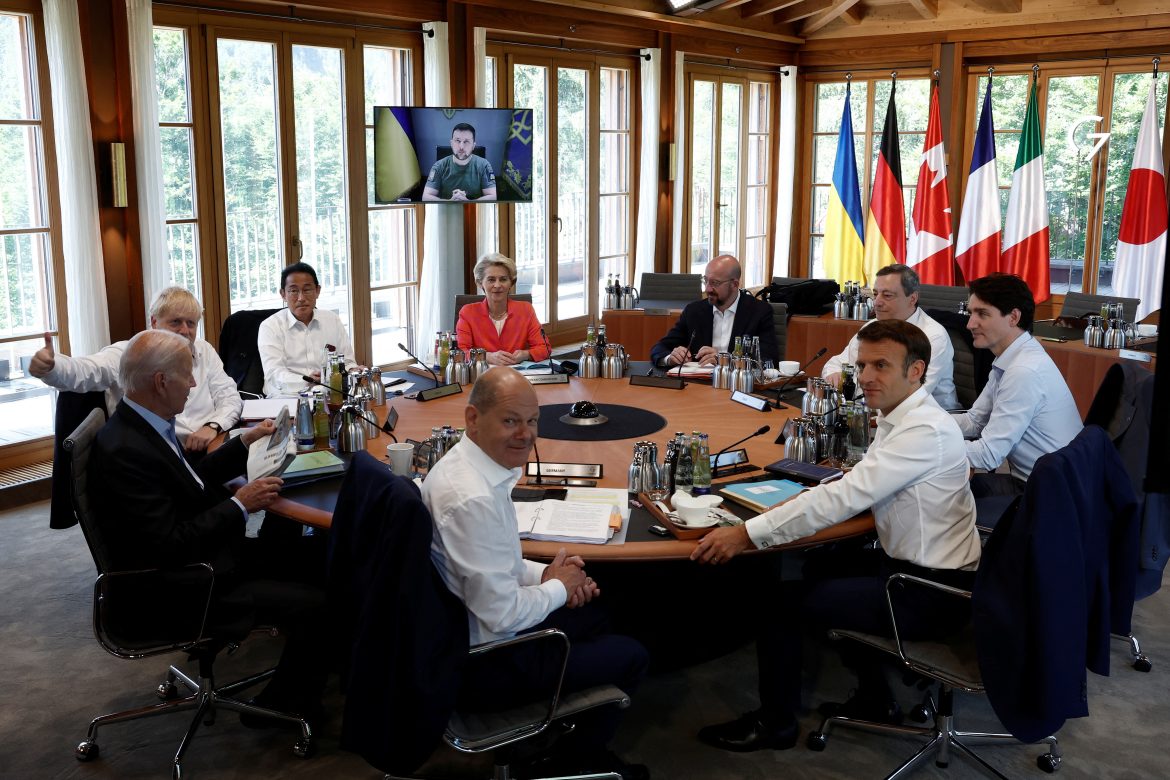 G7 leaders met with Ukrainian President Volodymyr Zelenskyy by video on Monday as the members reiterated their commitment to helping Ukraine defend itself against Russia. The three-day summit kicked off on Sunday amid growing concerns from Zelenskyy that the West is becoming weary of the war which has taken a significant toll on economies and food supplies around the globe.

President Biden, along with the leaders of Canada, France, Germany, Italy, the UK, and Japan, discussed plans to raise tariffs on Russian goods and impose further sanctions on Moscow, including placing a price cap on Russian oil. They also committed to sending more weapons to Ukraine and will continue to discuss a proposal to ban gold imports from Russia during the course of the talks.

The U.S. is expected to announce the purchase of an advanced surface-to-air missile system for Kyiv at the meeting, despite Russia calling supplies of such weaponry an escalation of foreign interference. Biden will also announce a $7.5 billion commitment to help Ukraine’s government meet its expenses, which is part of a drawdown of the $40 billion military and economic aid package he signed off on last month.

In a rare public display of levity, G7 leaders mocked Russian President Vladimir Putin’s history of posing shirtless during a Sunday roundtable discussion, specifically referring to a widely-circulated image of a bare-chested Putin sitting atop a horse while wearing sunglasses and a gold chain.

The guffaws began when British Prime Minister Boris Johnson asked fellow members if they should remove their jackets as they were being seated, according to a video shared by The New York Post.

Johnson caught the joke, remarking, “We all have to show we’re tougher than Putin.”

“We’re going to get the bare-chested horseback-riding display,” Trudeau quipped.

“Horseback riding is the best,” joked European Commission President Ursula von der Leyen, prompting Johnson to add, “We got to show them our pecs.”

President Biden did not join in on the banter.

It’s difficult to see this morning’s missile attack against residential areas of Kyiv 🇺🇦 as anything but a deliberate 🇷🇺 escalation and a signal to the G7 meeting in Elmau today. pic.twitter.com/NvTftqyHPd

Mayor Vitali Klitschko said Russian missiles hit at least two residential buildings and suggested that the strikes were possibly “a symbolic attack” ahead of this week’s separate NATO and G7 summits. President Volodymyr Zelenskyy said one strike killed a 37-year-old man and also injured the man’s young daughter and wife. Another claimed the life of a railroad worker and injured several others. A nearby kindergarten was also damaged.

Others saw the attacks as a purposeful affront to Western leaders.

“Russia is saying, ‘We can do this all day long. You guys are powerless to stop us,’” retired Lt. Gen. Ben Hodges, the former commanding general of U.S. Army forces in Europe, said. “The Russians are humiliating the leaders of the West.”

President Biden called the attacks “barbarism” as he met with G7 leaders in Germany.

Reuters has reported that Russian President Vladimir Putin will visit two small former Soviet states in central Asia this week, citing Russian state media. The trip will be Putin’s first known visit abroad since he traveled to Beijing for the Olympics opening ceremonies just weeks ahead of the Feb. 24 invasion of Ukraine.

The Russian president will reportedly make trips to Tajikistan and Turkmenistan and later meet Indonesian President Joko Widodo for talks in Moscow. Putin will also confer with close Russian ally, Tajik President Imomali Rakhmon, and will attend a summit of Caspian nations in Ashgabat which includes the leaders of Azerbaijan, Iran, Kazakhstan, and Turkmenistan.

Four months after her arrest at a Moscow airport for drug possession, American basketball star Brittney Griner is scheduled to appear in court Monday for a preliminary hearing ahead of her trial. The Phoenix Mercury star could face 10 years in prison if convicted on drug transportation charges, according to the Associated Press.

Griner was arrested in Russia’s Sheremetyevo Airport just days before Russia invaded Ukraine after drugs were found in her luggage. While Griner did break Russian laws, many analysts believe she is being used as a high-profile pawn by Russia as retribution for America’s support of Ukraine.

The AP noted that less than 1% of defendants in Russian criminal cases are acquitted.

A trial date has not yet been announced. Griner was recently ordered to remain in pretrial detention until July 2. Today’s hearing in the Moscow suburb of Khimki will address procedural issues.