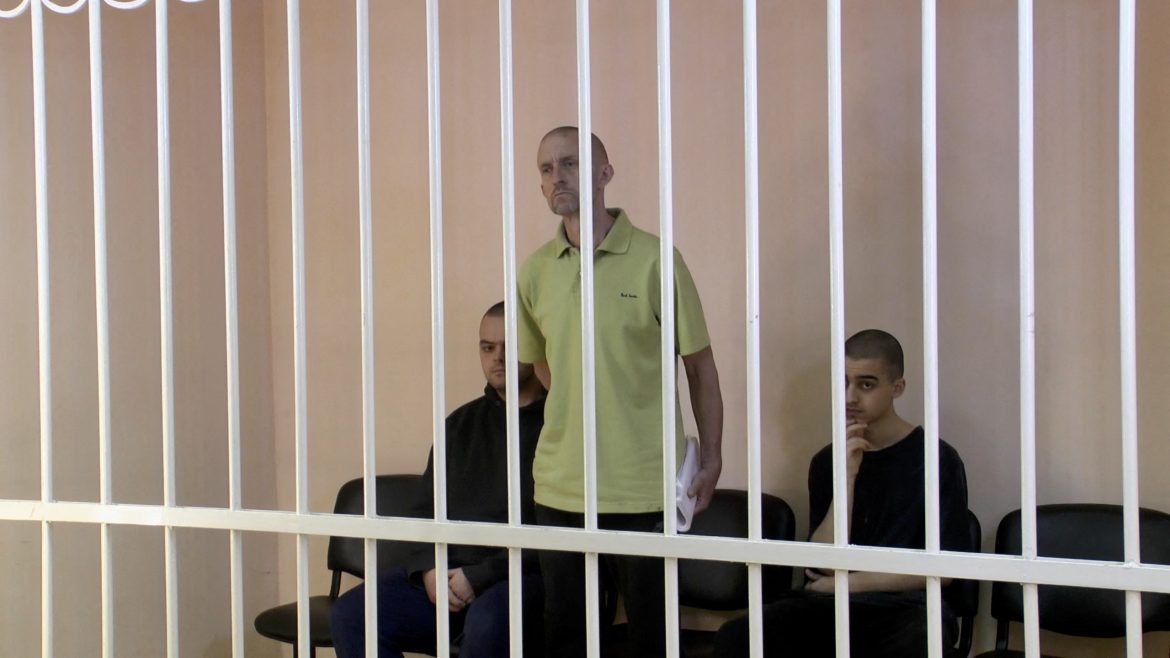 Two British nationals captured by Russians while fighting with the Ukrainian army reportedly pleaded guilty to some of the charges they face in a court in the self-declared Donetsk People’s Republic. Reuters reported that prosecutors quoted by Kremlin-owned news agency RIA claim Shaun Pinner, 48, pleaded guilty to “training in order to carry out terrorist activities” and that Aiden Aslin, 28, entered a guilty plea on lesser charges involving explosives.

Video footage that aired on Russian state media shows the men behind white prison bars, their heads shaved, as they leafed through sheafs of documents and listened to an interpreter translate the charges against them.

Russian-backed separatists have claimed that the men, who were both residents of Ukraine and serving in the country’s armed forces, had acted as “mercenaries” and are therefore not entitled to protection as prisoners of war.

Former British minister Robert Jenrick, who has been trying to negotiate the release of Pinner and Aslin, condemned the “trumped-up charges” and accused Moscow of a “completely outrageous breach of international law.”

A Moroccan national identified as Saaudun Brahim, who appeared alongside the men, is also said to have pleaded guilty to terrorism charges. No comment was immediately available from the Moroccan foreign ministry on Brahim’s case at the time the report was published.

All three men were reportedly captured in Mariupol by Russian soldiers in April. They each face a possible death penalty sentence over the combined charges.

Meanwhile, fears of a global food crisis continue to escalate over Ukraine’s inability to export millions of tons of grain through its blockaded ports.

Talks between Moscow and Kyiv to secure the shipment of 22 million tons of grain in Ukraine remain stalled.

Russia expressed support Wednesday for a U.N.-led plan to create a safe corridor in the Black Sea that would enable Ukraine to resume exports, but said it will only agree to do so if Ukraine removes mines in waters close to the port of Odesa. The Kremlin is also demanding the right to inspect incoming vessels for weapons. Ukraine says clearing the mines will make its coasts vulnerable to Russian attacks and asserts that Moscow’s word that it will not do so cannot be trusted.

Ukraine’s inability to ship its grain has significantly endangered the food supply in many developing countries, particularly in Africa, where fears of famine have now become reality.

Ukrainian President Volodymyr Zelenskyy said he met with American philanthropist Howard Buffet on Wednesday in Kyiv where the two discussed ways to help rebuild the country. Buffet, who is the son of billionaire investor Warren Buffett, is the CEO of the Howard G. Buffett Foundation, which describes itself as one of the largest private charitable foundations in the U.S.

“We discussed assistance that would be valuable for our state. I offered him the chance to join projects restoring irrigation systems in the Odesa region, supporting our people, (and) mine clearance,” Zelenskyy said in a tweet, according to Reuters.

The Howard G. Buffett Foundation seeks to ensure global food security and conflict mitigation, among other priorities, according to its website. Buffett is also the director of Berkshire Hathaway Inc, the conglomerate founded by his father

Gun law negotiations creep along in Senate, but immediate end not in sight