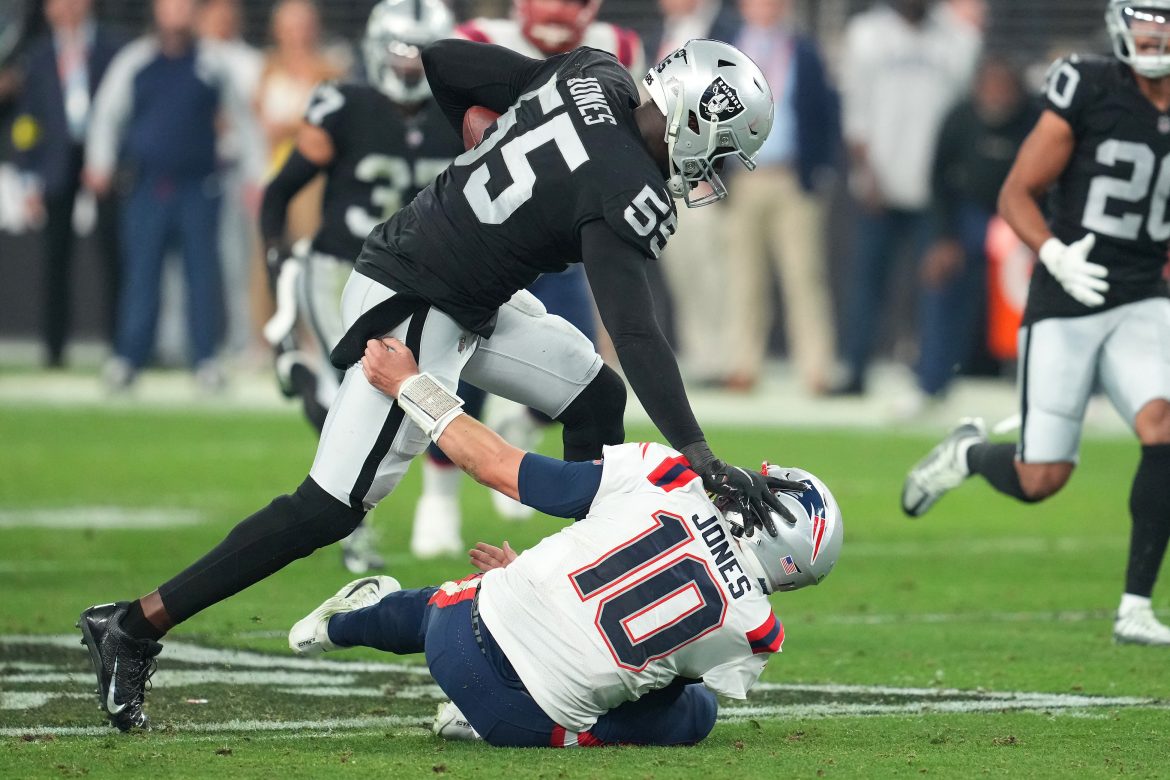 Bill Belichick had no answers for one of the wildest endings to any game in NFL history.

Belichick’s Patriots lost 30-24 to the Las Vegas Raiders on Sunday when New England wide receiver Jakobi Meyers inexplicably threw an unnecessary lateral across the field to quarterback Mac Jones on the final play of regulation. The ball was snagged by Raiders defensive end Chandler Jones, who stiff-armed Mac Jones to the ground and ran 48 yards for the game-winning touchdown.

Meyers got the ball from Rhamondre Stevenson, who pitched it as time expired after running 23 yards to the Raiders’ 32 on a draw play.

What just happened?? The @Raiders win on the final play!! #NEvsLV pic.twitter.com/cmKNUuab1k

Teams typically turn to the desperation lateral sequence on a final play when losing. The Patriots, however, were tied with the Raiders and were heading to overtime until Meyers handed them a victory.

Stevenson and Meyers accepted responsibility for the play.

Meyers pointed at himself.

“That ain’t his fault. He gave me the ball, I got to be smart with it,” Meyers said. “I thought I saw Mac open. I didn’t see Chandler Jones at the time. Just thought he was open, tried to get it to him, then let him try to make a play with it. But the score was tied, so like I said, I should have just laid down.”

Belichick, the six-time Super Bowl champion head coach, just repeated the play was a “mistake” in his news conference.

The Patriots fell to 7-7 and out of a playoff spot with three games remaining.

In Minneapolis, Minn. on Saturday, the Vikings pulled off the biggest comeback in NFL history behind four second-half touchdown throws from Kirk Cousins. Minnesota improved to 11-3, despite being down 33 points to the Indianapolis Colts at the end of the first half.

Trailing 36-7 with 4:53 left in the third quarter, Cousins came to life throwing for a record 417 second-half and overtime yards and propelling the team to a 39-36 overtime win to clinch the NFC North.

In Orchard Park, N.Y., Tyler Bass kicked a 25-yard field goal in snowy conditions as time expired, to give the Buffalo Bills a 32-29 win over the Miami Dolphins on Sunday. The Bills clinched an AFC playoff berth with the victory behind another stellar performance by QB Josh Allen.

In Cleveland, Ohio, Nick Chubb ran for 99 yards in the snow and Cleveland’s defense held firm to earn a 13-3 win over visiting Baltimore.

In Landover, Md., Kayvon Thibodeaux returned a strip-sack 1 yard for a touchdown and the New York Giants beat the Washington Commanders 20-12.

KAYVON THIBODEAUX RECOVERS HIS OWN STRIP SACK FOR GIANTS TD 🤯

In Tampa, Fla., Joe Burrow threw four TD passes in the second half and Tom Brady turned the ball over on four straight possessions as the Cincinnati Bengals rallied from a 17-0 deficit to beat the Tampa Bay Buccaneers 34-23 for their sixth straight win.

In Jacksonville, Fla., Rayshawn Jenkins intercepted Dak Prescott’s pass and returned it 52 yards for a TD to give the Jaguars a 40-34 comeback win over the Dallas Cowboys in overtime.

In Houston, Jerick McKinnon ran 26 yards for a score in overtime to lift the Kansas City Chiefs to a 30-24 win over the Houston Texans. Patrick Mahomes threw for 336 yards and two TDs and ran for a score as Kansas City secured its seventh straight AFC West title.

In East Rutherford, N.J., Jared Goff tossed a 51-yard, catch-and-run TD pass to Brock Wright on fourth down in the final two minutes to rally the Detroit Lions to a 20-17 win over the New York Jets.

In Inglewood, Calif., Cameron Dicker’s 43-yard field goal with 4 seconds remaining gave the Los Angeles Chargers a 17-14 victory over the Tennessee Titans. Justin Herbert passed for 313 yards but didn’t throw a TD pass for only the third time in 46 career games.

In Chicago, Jalen Hurts ran for three TDs and the Philadelphia Eagles overcame a slow start to beat the Chicago Bears 25-20. The Eagles are 13-1. Hurts has 13 TDs rushing and needs two more to break Cam Newton’s single-season record by a quarterback.

In Charlotte, N.C., Mitch Trubisky and Najee Harris each ran for a 1-yard TD as the Pittsburgh Steelers beat the Carolina Panthers 24-16.

In Denver, Latavius Murray ran for 130 yards and a touchdown, Marlon Mack also had a rushing TD, and the Broncos snapped a five-game losing streak with a 24-15 win over the Arizona Cardinals.