With flowers and a gun salute, Japan bids farewell to divisive Abe 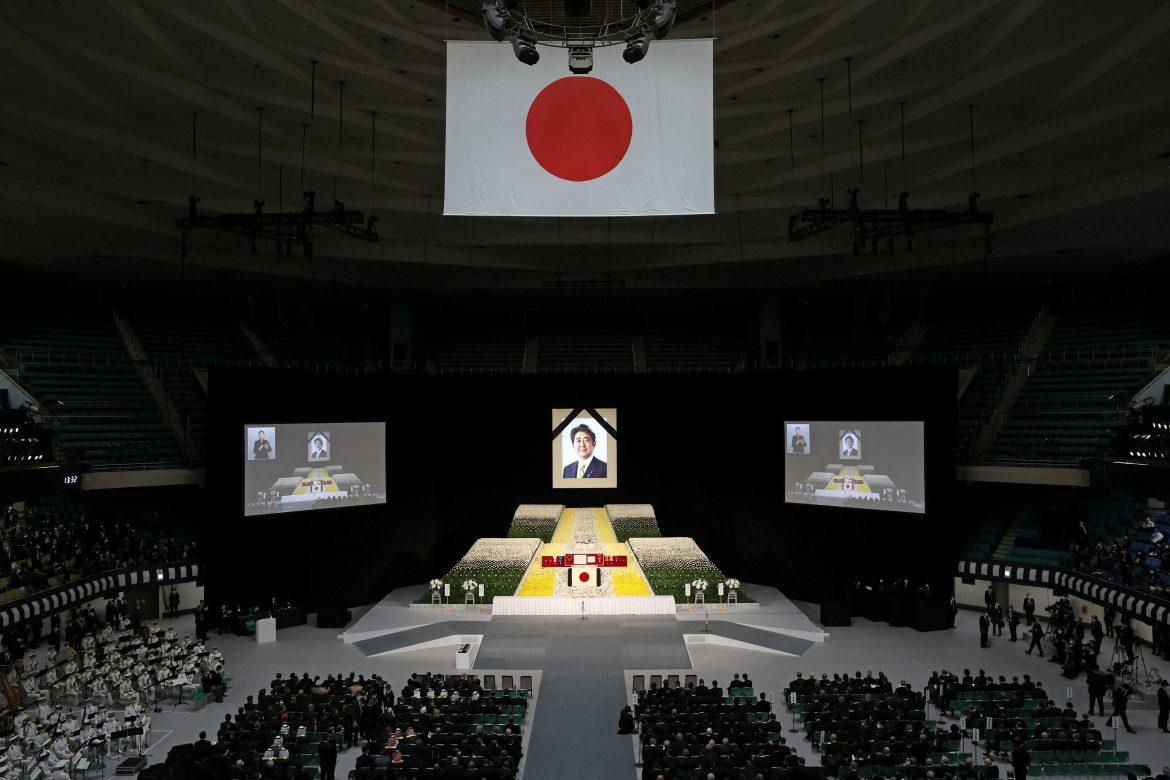 With flowers, prayers, and a 19-gun salute, Japan honored slain former Prime Minister Shinzo Abe on Tuesday at the first state funeral for a former premier in 55 years – a ceremony that has become as controversial as he was in life.

The ceremony started at 2:00 p.m. on Tuesday, with Abe’s ashes carried into the Nippon Budokan Hall in central Tokyo by his widow, Akie, to music from a military band and the booms of the honor-guard salute, which echoed inside the hall.

Thousands of mourners flooded designated spots near the venue from early in the morning to pay their last respects.

“I know it’s divisive and there are a lot of people against this, but there were so many people lined up to offer flowers,” said Yoshiko Kojima, a 63-year-old Tokyo housewife.

“I felt that now the funeral is actually taking place, many people have come out to pray for him.”

Abe’s killing at a July 8 campaign rally set off a flood of revelations about ties between lawmakers in the ruling Liberal Democratic Party (LDP) he once ran and the Unification Church, which critics call a cult, sparking a backlash against current premier Fumio Kishida.

With his support ratings dragged to their lowest ever by the controversy, Kishida has apologized and vowed to cut party ties to the church.

But opposition to honoring Abe with a state funeral, the first such event since 1967, has persisted, fed by an $11.5-million price tag to be borne by the state at a time of economic pain for ordinary citizens.

In one part of downtown Tokyo, protesters waved signs and chanted “No state funeral” to the tune of a guitar.

Protestors – including large numbers of young people – march toward the Budokan in central Tokyo in opposition to the state funeral for Shinzo Abe. pic.twitter.com/KBKvkFVVWy

Inside the Budokan, better known as a concert venue, a large portrait of Abe draped with black ribbon hung over a bank of green, white, and yellow flowers.

Nearby, a wall of photos showed Abe strolling with G7 leaders, holding hands with children, and visiting disaster areas.

A moment of silence was followed by a retrospective of Abe’s political life and speeches by leading ruling party figures, including Kishida and Yoshihide Suga, Abe’s successor and Kishida’s predecessor as prime minister.

Suga noted that many people in their 20s and 30s had shown up to offer flowers.

“You always said you wanted to make Japan better, that you wanted young people to have hope and pride,” Suga said, his voice trembling.

Abe’s widow, dressed in a black kimono, wiped away tears as Suga spoke.

The ceremony ended after the last mourner placed flowers on the stage, after which Kishida and Akie Abe carried the ashes out of the hall.

Japan held a rare state funeral for former conservative prime minister Shinzo Abe, who was assassinated. His wife, wearing a black kimono, carried his ashes in a wooden box. The US sent a delegation led by Kamala Harris. pic.twitter.com/LheQbHICic

Japan‘s longest-serving prime minister was a divisive figure who was dogged by scandals.

An unapologetic nationalist, Abe pushed the country toward a muscular defense posture that many now see as prescient amid growing concern about China, but others criticized as too hawkish.

About 4,300 people attended the funeral ceremony itself, along with at least 48 current or former government figures, including U.S. Vice President Kamala Harris and Indian Prime Minister Narendra Modi.

“It was he who coined the term free and open Indo-Pacific,” Harris told reporters after the funeral, referring to a concept that has become the cornerstone of Asian security.

“We cherish those principles and we stand by them. It is part of the bond that forms the alliance.”

Some 20,000 police were deployed, nearby roads were closed and even some schools shut as Japan sought to avoid the security blunders that led to Abe’s shooting with a homemade gun by a suspect who, police say, accused the Unification Church of impoverishing his family.

The state funeral for Abe, who received a private funeral days after his assassination, was the first for an ex-premier since one in 1967 for former Prime Minister Shigeru Yoshida.

Kishida has explained the decision as a way of honoring Abe’s achievements, as well as standing up for democracy, but ordinary Japanese remain divided. Only 30% of respondents in a recent poll by TV Asahi agreed with hosting the funeral, against 54% opposed.

“I think Kishida’s decision on the state funeral was driven by a mix of a sense of statesmanship, personal sentiment, and political calculation,” said James Brady, the lead Japan analyst at the Teneo consultancy.

Even without the recent revelations about the Unification Church, it would be hard to imagine any circumstances where a majority of Japanese would favor honoring Abe with a state funeral, said Tobias Harris, a senior fellow at the Center for American Progress and the author of a biography of the former premier.

“He was someone who almost welcomed and invited controversy and saw his mission as overturning a longstanding consensus or set of consensuses” about how Japan was run, Harris said.

Harris said that many Japanese were “attached to the postwar regime that he wanted to overturn.”

Congressmen demand answers about Venezuela sending prisoners to the border