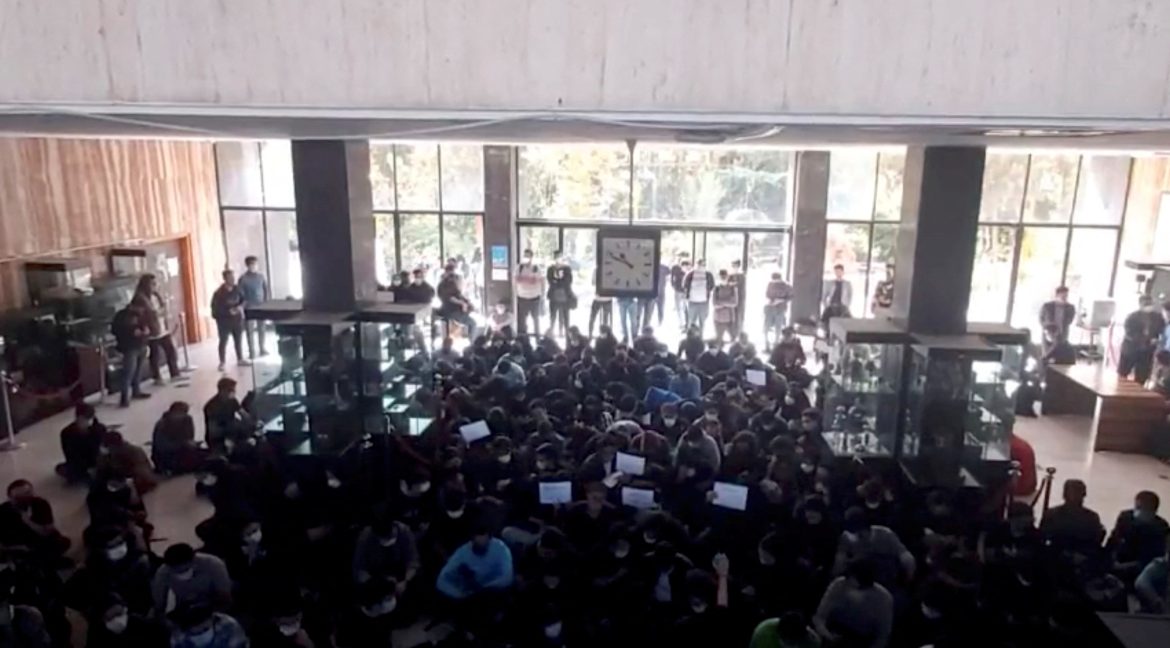 Iranian security forces opened fire at mourners who gathered in Mahsa Amini’s Kurdish hometown of Saqez to mark 40 days since she died in police custody, a witness said on Wednesday, while state media said people at the cemetery had clashed with riot police.

“The riot police shot mourners who gathered at the cemetery for Mahsa’s memorial ceremony … dozens have been arrested,” the witness said. Iranian authorities were not available to comment.

Iran‘s semi-official ISNA news agency said about 10,000 people had gathered at the cemetery, adding that internet was cut off after clashes between security forces and people there.

Videos on social media showed thousands of Iranians marching toward the cemetery where Amini is buried despite the heavy presence of riot police. Activists had called for protests across the country to mark 40 days since she died after being detained for “inappropriate attire”.

Scenes of huge crowds making their way to the Saqez grave of #MahsaAmini on the 40th day after her death. #Iran pic.twitter.com/XYzngQaqIQ

Demonstrations ignited by the 22-year-old’s death while in the custody of Iran‘s morality police on Sept. 16 have become one of the boldest challenges to the clerical leadership since the 1979 revolution.

A wide range of Iranians have come out onto the streets, with some calling for the downfall of the Islamic Republic and chanting “Death to (Supreme Leader Ayatollah Ali) Khamenei.”

A witness said, “men and women have gathered around Amini’s grave at the Aichi cemetery in Saqez, chanting ‘Woman, Life, Freedom'”. Another witness in Saqez said the cemetery was filled with members of the volunteer Basij militia and riot police.

“But people from all around the Kurdistan province are here. We are all mourning Mahsa’s death together.”

Fearing the 40-day anniversary of Amini’s death would fuel further violent protests, security police had warned her family not to hold a memorial procession or “their son will be arrested”, rights groups said.

However, the governor of Kurdistan Zarei Kusha denied any state limitation for holding a memorial service, adding that “it was the decision of her family not to hold a gathering”, according to state media.

Videos on social media showed security forces had blocked roads leading to Saqez to prevent people from other cities to gather at the cemetery. Reuters could not verify the authenticity of the videos.

Authorities closed all schools and universities in the Kurdistan province on Wednesday “because of a wave of influenza”, Iranian state media reported.

Videos on social media showed crowds packing streets in many cities and the bazaars of Tehran and some other cities shut down with people chanting “Death to Khamenei”.

1500tasvir, a Twitter account focused on Iran protests with 280,000 followers, reported a “brutal crackdown” on protesters in multiple locations in Tehran, including a gathering at the Tehran Medical Association.

A video on the account showed students at Tehran University fleeing the scene while a loud explosion was heard.

Another video widely shared on Twitter showed men fleeing the scene while security forces fired what sounded like pellets.

An Iranian former pro-reform official said the spread of the protests appeared to have taken the authorities by surprise and contrasted starkly with the establishment’s assertions that support for the Islamic system is overwhelming.

While some analysts said prospects for the imminent dawn of a new political order are slim, activists said a wall of fear had fallen and the path to a new revolution was not reversible.

Students have played a pivotal role in the protests, with dozens of universities on strike. Hundreds of schoolgirls have joined in, chanting “Freedom, Freedom, Freedom,” despite fierce crackdowns by security forces.

“I am not scared of them anymore. They (the establishment) should be scared of us. For years they did not let us have a normal life. Mullahs should go,” said a teenage student in the northern city of Sari.

Rights groups said at least 250 protesters have been killed, including teenage girls, and thousands have been arrested.

The authorities, who have accused the United States and other Western countries of fomenting what they call “riots”, have yet to announce a death toll but state media have said around 30 members of the security forces have been killed.