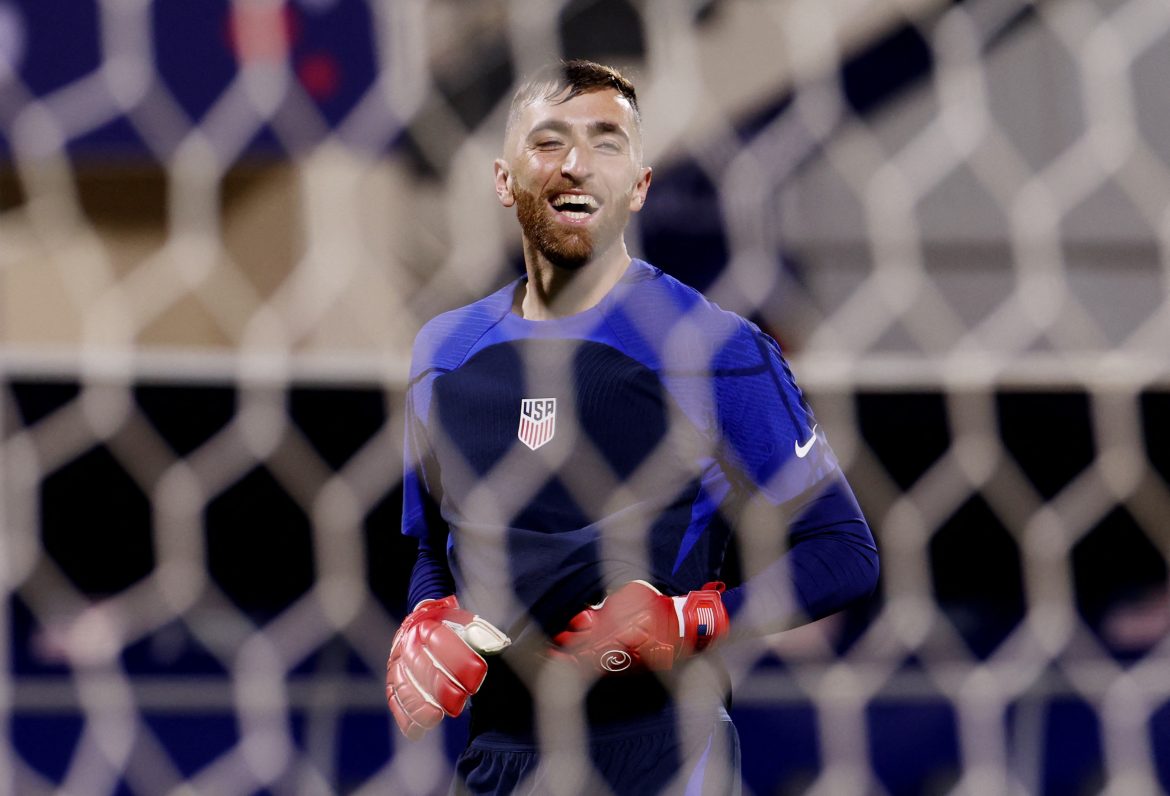 Matt Turner’s Thanksgiving usually involves turkey dinner and all the trimmings with his family back in Park Ridge, New Jersey but this year was a little different.

While the United States shut down on Thursday, goalkeeper Turner and his U.S. teammates were busy preparing for their Friday showdown with England at the World Cup in Qatar.

The 28-year-old goalkeeper, who joined Arsenal from MLS side New England Revolution in June, will certainly be in no mood for gifts as he tries to shut out Gareth Southgate’s side.

A daunting prospect, compared to tucking into a seasonal feast, but Turner is more than happy to skip the routine as the U.S. attempt to repeat their famous World Cup win over England 72 years ago in Belo Horizonte.

“Yeah, every Thanksgiving, probably 30 or 40 of my family and friends all gather at my mom and dad’s house back in Park Ridge,” Turner told reporters on Wednesday.

“So yeah, we’re gonna miss out on that but mom and dad are here in Qatar. It’ll be a little bit different for the people back home this time around, but look forward to the future many more times with them.”

Londoner Cameron Carter-Vickers, who qualifies to play for the U.S. because of his Louisiana-born father, said Thanksgiving for him was “not such a big deal”.

But if the U.S. does pull off another shock at a tournament already shaken up by some big ones, the belated celebrations planned for the team on Saturday will be sweet indeed.

“All our families are here so on Saturday we’ll have a nice little Thanksgiving gathering, so I’ll enjoy that,” he said.

It is not just the players, either, who will forsake their usual Thanksgiving rituals. The U.S. Soccer Federation said it had sold almost 4,000 tickets for Friday’s game, with many making the 8,000-mile trip to the Gulf state.

Iran made the U.S.-England matchup even more interesting in the day’s early match, featuring the other two teams from Group B.

Iran scored twice after the eighth minute of stoppage time to snatch a stunning 2-0 win over Wales on Friday that breathed new life into their World Cup campaign and left the Welsh flat on their backs and facing a make-or-break decider against England.

After Wales keeper Wayne Hennessey was sent off in the 87th minute, Iran produced a remarkable finale, with Roozbeh Cheshmi driving home to give them the lead before Ramin Rezaeian added another in the 11th minute of stoppage time.

Iran, who had been facing elimination if they lost, was almost unrecognizable from the side that was thrashed 6-2 by England in their opener, and they were deserved winners even if they left it very late.

Carlos Queiroz’s side was twice denied by the woodwork in the second half at Ahmad bin Ali Stadium and made the most of the extra man after Hennessey was given his marching orders following a dreadful head-high challenge on Mehdi Taremi.

The win moves Iran to three points in Group B, two more than Wales, who were held to a 1-1 draw by the United States in their opener, with England and the U.S. facing each other later on Friday.

The group comes to a head next Tuesday, when Wales plays their old rivals and Iran faces the U.S.

England will be through to the next round with a win over the U.S., while Iran’s heroics have left them with all to play for.

The win was another feather in the cap for Asian sides after Saudi Arabia’s shock victory over Argentina and Japan’s triumph over Germany, as the assault on the traditional soccer powerbases of Europe and South America continues.

Once again, Iran’s buildup to the match had been dominated by speculation about how the players would respond to anti-government protests at home and whether they would give the national anthem the silent treatment as they did against England.

This time they sang along, against a backdrop of boos and jeers from the crowd with some fans pictured sobbing in the stands.

Iran’s performance also stood in stark contrast to their woeful display in their opening encounter, as they showed far more ambition, attacking adventure, and enterprising passing.

“I didn’t change, absolutely nothing, it was the players that adjusted today,” said Queiroz. “They only think about playing football with no fear, they expressed themselves. And that’s why it worked well.”

Qatar on brink of early exit

Host nation Qatar is perilously close to crashing out of the World Cup after they slumped to a 3-1 defeat by Senegal at the Al Thumama Stadium on Friday, despite Mohammed Muntari netting a first-ever World Cup finals goal for the Qataris.

A win or a draw for the Netherlands against Ecuador, who beat Qatar in the tournament’s opening game, later on Friday will see the Qataris become the first side mathematically eliminated from the competition.

The opening-night nerves were nowhere to be seen as Qatar quickly got to grips with Senegal and they should have had a penalty when Ismaila Sarr bundled over Akram Afif, but Spanish referee Antonio Mateu waved away their pleas, and the Video Assistant Referee (VAR) did not intervene.

With Qatar defending well, it was going to take either a moment of magic or a catastrophic mistake for Senegal to break the deadlock, and unfortunately for Qatar defender Boualem Khoukhi, it turned out to be the latter.

His attempt to clear a routine low pass into the box by Krepin Diatta went disastrously wrong as he went to ground without making proper contact with the ball.

Khoukhi’s fluffed effort allowed Dia to pounce, and the 26-year-old striker needed no second invitation to rattle the ball in at the near post to give Senegal the lead.

With the Qatari crowd thinning out somewhat at the start of the second half, Famara Diedhou doubled Senegal’s advantage with a brilliant glancing header from an Ismail Jakobs corner in the 48th minute.

Muntari reduced the deficit in the 78th with a bullet header from Ismail Mohamad’s cross but Senegal substitute Bamba Dieng swept home his side’s third to consign Qatar to the bottom of Group A with no points, while their group rivals all have three.

Copyright 2022 Thomson/Reuters. This is a combination of three separate reports.

Report: Almost 60% of COVID-19 deaths are in vaccinated individuals