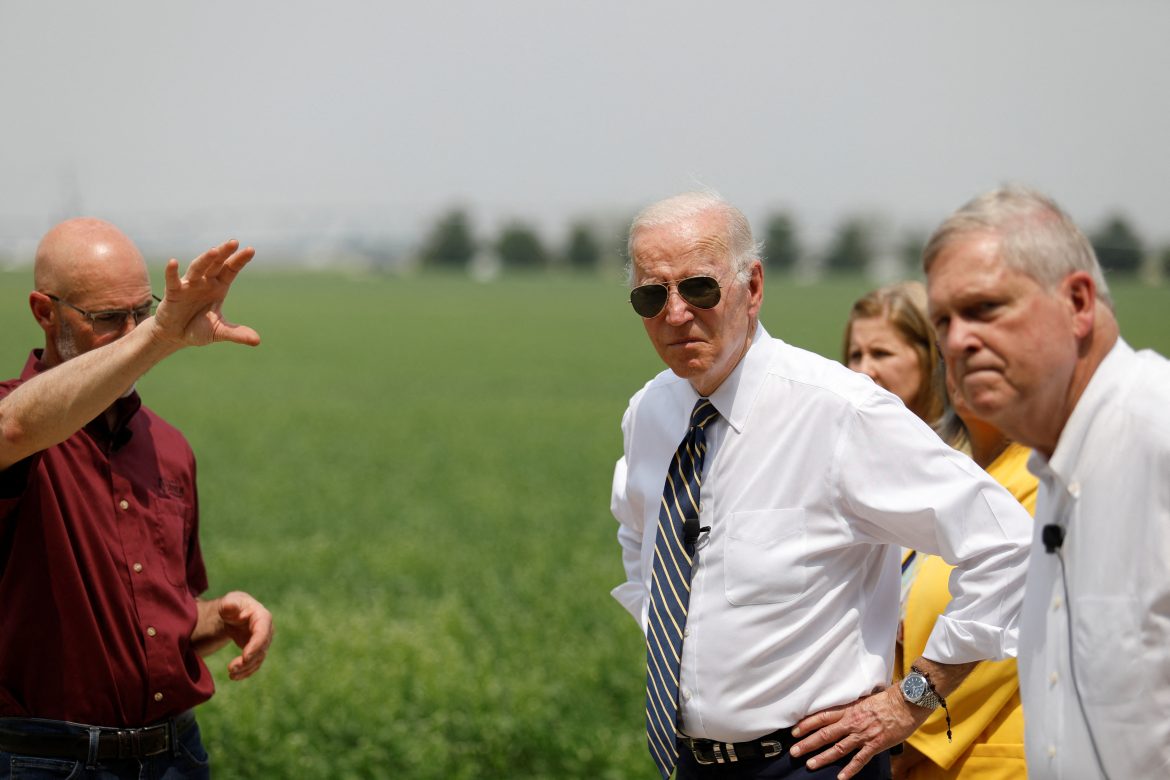 U.S. President Joe Biden on Wednesday shifted blame for the latest spike in global food prices onto Russia’s war on Ukraine and visited a family farm in Illinois where he pledged to support the nation’s farmers as they seek to fill the supply shortage.

Biden said U.S. farmers have helped pull Americans through the COVID-19 pandemic and now the Ukraine crisis. “You are the backbone of freedom,” he said, following a tour of an 800-acre family farm in Kankakee owned by Jeff and Gina O’Connor.

“Right now, America is fighting on two fronts. At home, it’s inflation and rising prices. Abroad, it’s helping Ukrainians defend their democracy and feeding those who are left hungry around the world because Russian atrocities exist,” Biden said.

The visit comes as the White House is struggling to rein in inflation on many fronts, from gasoline to food. U.S. gas prices hit record highs on Tuesday, and Russia’s invasion of Ukraine in late February dramatically worsened the outlook for food prices.

The administration will also increase the number of counties eligible for double cropping insurance for planting a second crop on the same land in the same year, the White House said. This is seen as somewhat controversial as the practice of double cropping is highly dependent on favorable conditions to be successful, but Biden stated that “it is a risk we need to take.”

Biden declared this week that combating inflation is the administration’s No. 1 priority, echoing repeated national polls that show Americans see it as their greatest concern.

New data on Wednesday showed U.S. consumer prices continued to rise at a significantly elevated pace. The Labor Department said prices across the economy rose 8.3% over the 12 months through April. Food prices alone gained 9.4% over that period.

The U.N. food agency recently said food prices hit an all-time record in February and again in March, building on previous COVID-driven price spikes. Russia and Ukraine account for nearly a third of global wheat and barley production, and two-thirds of the world’s exports of sunflower oil used for cooking.

While in Illinois, Biden also visited Chicago where he thanked unions for their support and touted his job creation record to a raucous crowd of 3,500 union members from across the United States and Canada at a convention hosted by the International Brotherhood of Electrical Workers.

“You all brought me to the dance, and I mean it,” Biden said, touting himself the most pro-union president and lauding the middle class, which he said built America, thanks to union support. “Look folks, our economy has gone from being on the mend to being on the move,” he said.

Biden also defended the fiscal stimulus he championed during the pandemic against criticism that it drove up inflation. “What did the MAGA crowd wanna do? Forget it,” he said, adding to his recent attacks on the Republican movement. Biden has taken an increasingly aggressive tone against what he has called the “ultra-MAGA” movement, in an apparent attempt to rile up the left before midterms.

But the president took a more reflective tone at a Chicago fundraiser later in the evening, acknowledging that soaring prices would beset his party’s efforts to defeat Republicans.

“It’s going to be hard because inflation is gonna scare the living hell out of everyone.”