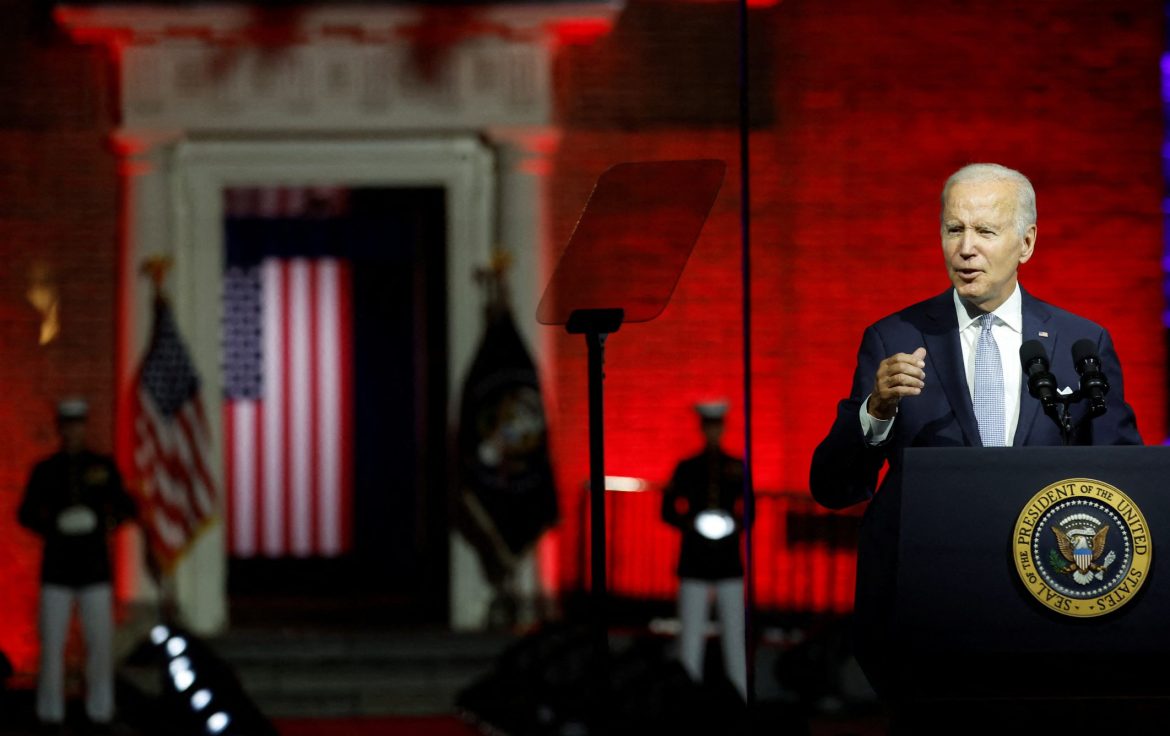 It’s rare that any White House press secretary comes across as sympathetic, but given President Joe Biden’s doubling down on his anti-MAGA stance, one might be forgiven for feeling sorry for Karine Jean-Pierre.

The press secretary spent the bulk of her Thursday press briefing assuring the media that the current president did not actively hate almost half the country, only for Biden to stand before Independence Hall in Philadelphia and, for reasons perhaps known only to him, turn what he said was not a political speech into something that can only be described as a political attack against a wide swath of targets.

“Here, in my view, is what is true. MAGA Republicans do not respect the Constitution,” Biden said. “They do not believe in the rule of law. They do not recognize the will of the people.”

The problem — and this has persisted for several days — is that Biden and his staff have struggled to consistently quantify how many MAGA Republicans there are or even who qualifies as a MAGA Republican.

In her press briefing, Jean-Pierre indicated the president only meant MAGA Republicans who also hold office.

When it was pointed out to her that some Democrat organizations have backed MAGA Republican candidates — specifically the Democratic Governors Association lending its support to Maryland gubernatorial candidate Dan Cox — Jean-Pierre quickly changed the subject.

“I can’t talk about campaigns and what another … candidate is doing or a committee is doing. I can’t speak [to] that from here,” Jean-Pierre said. “Look, I can say this: The President has been — has always been clear: There are going to be people who disagree with his programs and legislative priorities, and that’s what democracy is all about.  Like, we understand that, right? But people accept elections, and we move forward as a nation, right?”

On Thursday, one person who certainly had not moved beyond the 2020 election cycle was Biden himself. The president spent ample time repeating claims he made while a candidate.

“Donald Trump and the MAGA Republicans represent an extremism that threatens the very foundations of our republic,” Biden said. “We are not powerless in the face of these threats. We are not bystanders in this ongoing attack on democracy. There are far more Americans, far more Americans from every background and belief who reject the extreme MAGA ideology than those that accept it.”

In all his speaking, Biden either struggled or chose not to specify who and how many MAGA Republicans he meant.

The above statement is difficult to reconcile along logical or arithmetic lines.

In short, Biden attempted to earn political points by attacking MAGA without explaining how this group of political actors succeeds in gaining political office without receiving majority support in elections.

The risk Biden ran Thursday night, as well as during an earlier speech in which he referred to MAGA leaders as “semi-fascist,” was that his words could be construed as divisive. Republicans hammered on that point throughout the night.

A recap in case you missed Biden’s speech:

All division, no solutions.

“Never before has a President shown such hatred for his fellow Americans,” Rep. Lauren Boebert (R-Colo.) tweeted. In a subsequent tweet, she added, “Joe Biden will do ANYTHING to make the midterms about something other than his failed regime. It’s not going to work, Joe, no matter how many drugged-up speeches you give.”

Boebert provided no evidence that the president was on drugs during this speech.

Root of the rhetoric

The dirty little secret of Biden’s speech is not that it could divide America or even that it fails to coalesce. It’s that thoughts of unity are likely secondary in the eyes of the president.

During his speech, Biden encouraged everyone outside the MAGA movement to “speak up, speak out, get engaged — vote, vote, vote.”

Underpinning all of the rhetoric is the president’s desire to ward off midterm disaster for his party.

To do that, Biden and the Democrats need a villain and an existential threat. Enter Trump and the MAGA movement.

If analyzed from that perspective, Biden’s speech can easily be construed as having not been aimed at the bulk of conservatives, only those who make a convenient target.

However, it remains to be seen if voters will rally behind the president.

The general thrust of Biden’s speech was that Trump and his movement have corrupted the soul of the United States.

At one point, the president complained that “too much of what’s happening in the country isn’t normal.”

Even before Biden gave his speech, Republicans were pouncing on his verbiage.

At a different point in his speech, McCarthy called upon Biden to apologize for having failed to unite the country.

“President Biden has chosen to divide, demean, and disparage his fellow Americans — Why? simply because they disagree with his policies,” McCarthy said. “That is not leadership.”

McCarthy continued, “When the President speaks tonight at Independence Hall, the first lines out of his mouth should be to apologize for slandering tens of millions of Americans as ‘fascists.'”

Former President Donald Trump was remarkably mum on Biden’s Thursday-night remarks. As of this writing, Trump has not yet offered public comment.

A matter of manners

Biden’s speech was interrupted several times by someone with a bullhorn and siren.

“They’re entitled to be outrageous,” Biden said. “This is a democracy. Good manners is nothing they’ve ever suffered from.”

This remark drew a response from Boebert, who wondered where Biden’s condemnations were for far-less-genteel leftist troublemakers.

“You know who doesn’t have manners? Antifa, BLM, and the thugs that targeted SCOTUS Justices at their homes,” Boebert tweeted.