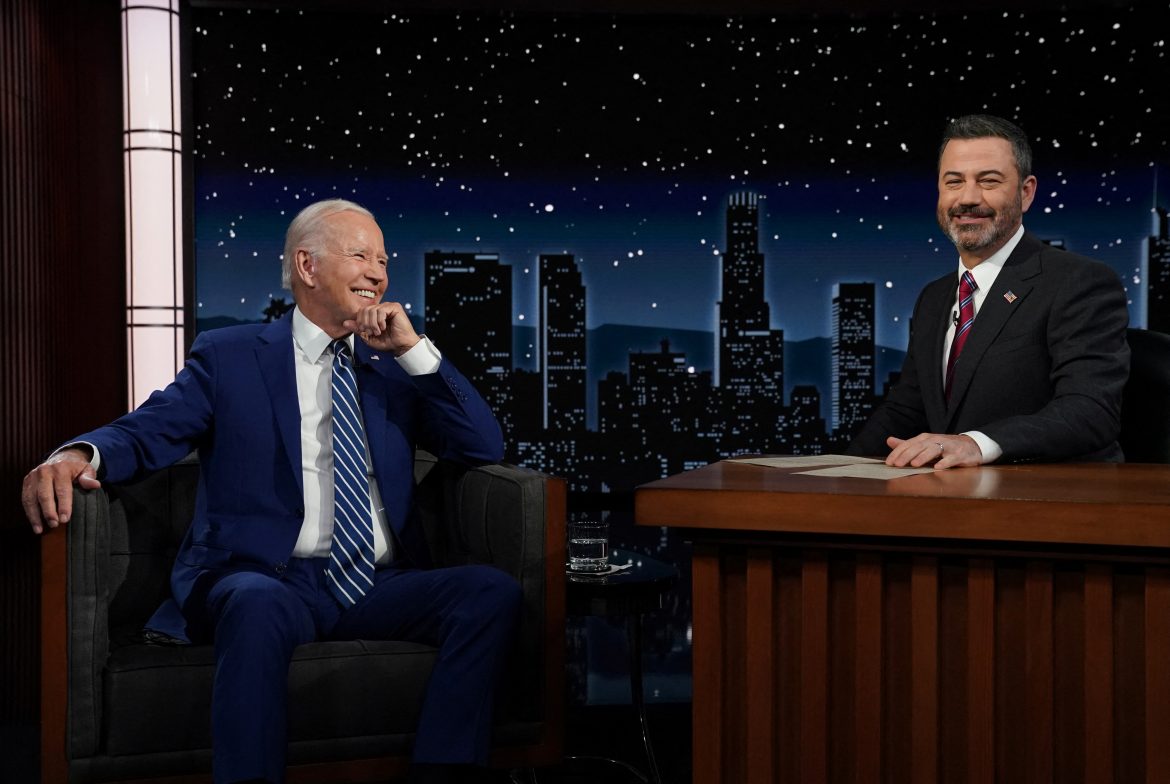 Much of the first half of the interview surrounded the topic of gun policy. Biden told Kimmel he believes that “rational gun policy” has not passed in Congress due to “intimidation by the NRA” and Republican fears of being primaried.

“This is not your father’s Republican party this is a MAGA party,” Biden said, keeping with his “MAGA crowd” rhetoric, which he once described as the “the most extreme political organization that has existed” in modern American history. “We’ve seen such a radical shift in one party,” Biden said of the GOP later in the interview.

Kimmel asked Biden why he can’t sign an executive order to address gun violence, claiming that Donald Trump “passed those out like Halloween candy.”

“I have issued executive orders within the power of the presidency to be able to deal with these – everything having to do with guns, gun ownership,” Biden replied, but said he has only done what is within his power to do. “I don’t want to emulate Trump’s abuse of the constitution and the constitutional authority.”

He followed this up by saying he often gets asked, “’The Republicans don’t play it square. Why do you play it square?’” Biden the said that if Democrats behaved like Republicans “our democracy would literally be in jeopardy,” before dding, “not a joke.”

Kimmel expressed frustration over the fact that even though Democrats control both chambers of Congress and the White House there has been little progress implementing Democratic priorities on guns, abortion, voting expansion, climate change, and more.

Addressing climate change specifically, Biden said there has in fact been progress with environmental policy and that “there’s an opportunity with the process we have dealing with energy to be able to gradually move more rapidly than we have been to alternatives.”

Biden’s comments mirrored those he made last month when addressing the astronomical rise in gas prices. “We’re going through an incredible transition that is taking place that,” Biden said in a joint press conference in Japan on May 23. “God willing, when it’s over we’ll be stronger, and the world will be stronger, and less reliant on fossil fuels when this is over.”

The president was criticized by Texas Senator Ted Cruz at the time for showing “arrogant contempt for working men and women in this country.”

Biden further responded to Kimmel’s policy frustrations, saying, “I got 81 million votes, more than anybody’s ever gotten . . . but what’s happened to me is you know we still only ended up with 50 senators, which means that we have 50 presidents.”

Moving on to the economy, the president admitted that inflation is “the bane of our existence,” but asserted that it’s “mostly in food and in gasoline.” Biden suggested the solution to easing the economic strain is to lower costs of healthcare, prescription drugs, and childcare.

Biden also blamed high gas prices on oil companies, claiming they won’t drill “because they make more money not drilling and buying back their one stock.”

“There’s a lot of major things we’ve done,” Biden said of his record as whole, “but what we haven’t done is we haven’t been able to communicate it.”

Biden also blamed “sensationalized” news for the negative perception of his administration.