Biden ‘convinced’ Russia will invade Ukraine, but will not send in troops to fight 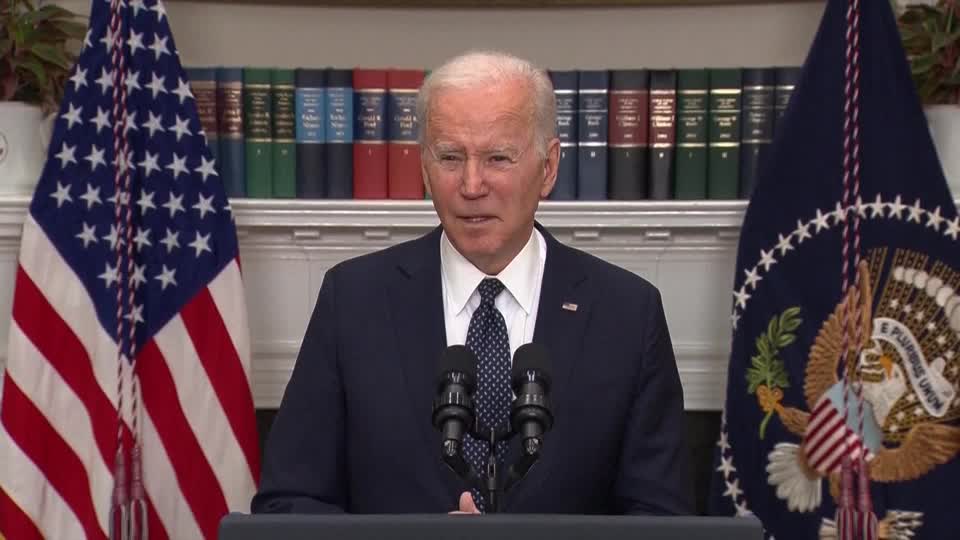 Friday afternoon, as his surrogates continued to prep for what might be the inevitable, U.S. President Joe Biden clung to the last threads of hope for diplomacy but told the world he believed Russian President Vladimir Putin was already resolute about invading Ukraine.

President Biden said he expected Russia to begin a move to overtake Ukraine’s capital city of Kyiv within the week.

“As of this moment, I’m convinced [Putin has] made the decision [to invade],” President Biden said during a meeting with the press. “We have reason to believe that.”

At a different point in his talk, the President described America’s planned response; it was an approach rooted in pragmatism, but brutal in what it would mean for Ukraine.

“Make no mistake: If Russia pursues its plans, it will be responsible for a catastrophic and needless war of choice,” Biden said. “The United States and our Allies are prepared to defend every inch of NATO territory from any threat to our collective security as well.

“We also will not send troops in to fight in Ukraine, but we will continue to support the Ukrainian people.”

That final sentence might prove to have been the giveaway for how a Russian invasion of Ukraine would play out. The Ukrainian people would be left to fight the larger nation alone, but with backing of some description of the West.

Backing, for now, will primarily take the form of international sanctions, not troops and weapons. Those resources have been deployed to prevent a Russian incursion into the farthest-east NATO nations. The absence of American troops would also prove a means of containing the conflagration.

Still, even as a Russian victory over an outmatched Ukrainian military would be the expected outcome of an invasion, the Biden Administration is touting its sanctions plan as sufficiently fanged to cripple Russia’s economy and war effort.

“The cost to Russia would be immense, both to its economy and its strategic position in the world,” Daleep Singh, deputy director for the National Economic Council, said during a briefing. “Our financial sanctions have been designed to impose overwhelming and immediate costs to the largest financial institutions and state-owned enterprises in Russia.”

Singh also said he believed international sanctions would cause a major issue for the power of the ruble. Russia is currently suffering through an inflation rate of 8.7%, which is higher than even that of the United States.

“If we impose these sanctions, which are the most severe measures we’ve ever contemplated against Russia, you don’t have to take my word for what would happen,” Singh said, “look back to 2014 with a much less severe package.  We saw record capital outflows.  We saw a weakening of the ruble by up to 50 percent.  We saw Russia spend 25 percent of its foreign reserves in a futile attempt to defend the ruble.  We saw interest rates spike to 17 percent.  We saw inflation spike to 17 percent.  And the economy fell into recession.”

Importantly, 2014’s sanctions worked in the sense that they hurt the Russian economy, but they did nothing to prevent the annexation of Crimea or facilitate the region’s return to Ukrainian control.

The U.S. Senate, which would have to approve a sanctions package, has not yet passed such a bill. Rather, Senators agreed only to a non-binding resolution agreeing to sanction Russia if it invades Ukraine.

“[Russia] can still choose diplomacy,” Biden said. “It is not too late to de-escalate and return to the negotiating table.”

Of late, the idea of diplomacy between Russia and the Ukraine, and by extension the West, has grown more and more into an exercise in futility.

In the last two days, Russia has expelled the No. 2 American diplomat from its country and conducted a massive nuclear drill overseen by Putin.

These developments follow the build-up of Russian troops around Ukraine’s borders as well as the arrival of 13 Russian warships near Ukraine’s Black Sea coast.

“Throughout these tense moments, the Ukrainian forces have shown great judgment and, I might add, restraint,” Biden said. “They’ve refused to allow the Russians to bait them into war.”

The President’s statement was made in the wake of several days of shelling and other violations of a ceasefire along the Ukrainian border, and just after Biden warned of Russian misinformation and propaganda efforts.

According to Biden, Russian state-controlled media was accusing Ukraine of attempting a genocide in the Donbas region and of behaving as an aggressor against Russia.

“All these are consistent with the playbook the Russians have used before: to set up a false justification to act against Ukraine,” Biden said. “This is also in line with the pretext scenarios that the United States and our Allies and partners have been warning about for weeks.”

Friday’s press briefing marked the end of a busy day for the Biden Administration, which is attempting to pressure Russia into backing down while concurrently bracing the U.S. for Russian countermeasures.

While Russia would be unlikely to strike out militarily at the United States or NATO, experts in Washington believe cyberattacks are likely, both in Ukraine and on American soil.

“Over the last decade, Russia has used cyber as a major part of its military activity beyond its borders, including to undermine, coerce, and destabilize Ukraine,” said Anne Neuberger, Deputy National Security Advisor for Cyber and Emerging Technology. “For that reason, and at the President’s direction, we’ve been working to prepare for potential cyberattacks since November.”

Meanwhile, Vice President Harris, who is in Munich, met with the leaders of Latvia, Estonia, and Lithuania as well as NATO Secretary General Jens Stoltenberg.

Secretary of State Antony Blinken and Russian Foreign Minister Sergei Lavrov have agreed to meet on Feb. 24 in what might prove the last chance to avert war. A skeptical President Biden indicated he was unsure if peace would prevail.

“[If] Russia takes military action before that date, it will be clear that they have slammed the door shut on diplomacy,” Biden said. “They will have … chosen war, and they will pay a steep price for doing so — not only from the sanctions that we and our allies will impose … but the moral outrage that the rest of the world will visit upon them.”