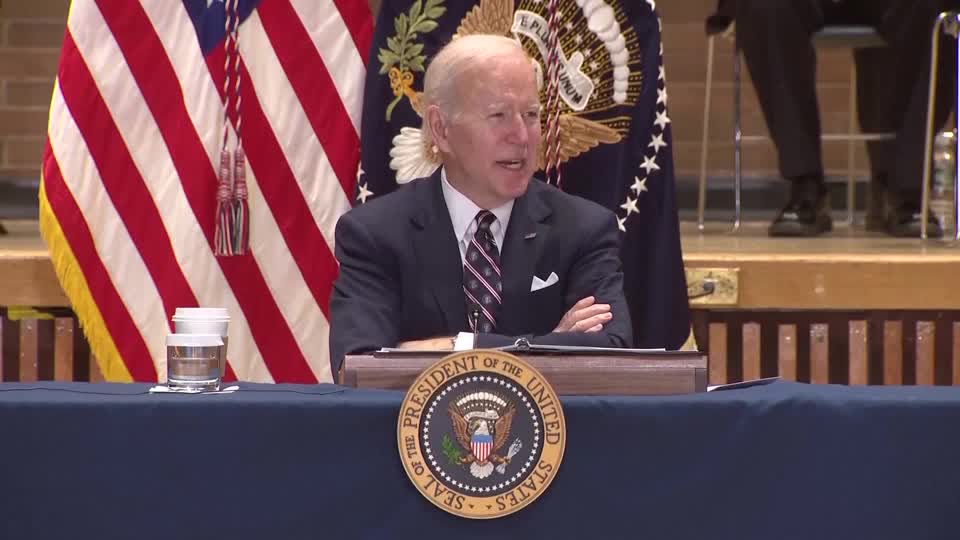 President Joe Biden used his Thursday speech at a New York gun violence prevention ceremony to call for a united response to a general rise in violence and the use of home-assembled weapons in crimes, while decrying activists seeking to protect their Second Amendment rights.

Standing before One Police Plaza, Biden cited national statistics as well as statistics only pertaining to New York City as he painted a bleak picture of gun-related crime.  The statistics are disturbing, as an average of 316 people were shot and 106 killed per day in the U.S. Six NYPD officers have already been killed in 2022 as well.

Biden, however, was most critical of guns-rights activists and politicians in his speech.

“Enough is enough,” Biden said. “Because we know we can do things about this but for the resistance we’re getting from some sectors of the government and the Congress and the state legislatures and the organizational structures out there.”

The president, who was joined by New York Mayor Eric Adams and Attorney General Merrick Garland, presented some measures he said would have meaningful impact on gun crime, chief among them additional training and pay for police officers.

“The answer is not to defund the police, it’s to give you the tools, the training, the funding to be partners, to be protectors,” Biden said. “And the community needs you [and] policing that treats everyone with respect and dignity.”

Another novel element of the speech was that President Biden indicated he and the Justice Department were nearing the completion of a policy that would crackdown on “ghost guns” – firearms bought piecemeal and assembled by owners in their homes.

Ghost guns first became a focus of the Biden administration last May, when the Justice Department announced it was seeking to close a loophole that allowed gun owners to possess weapons lacking serial numbers.

“[Ghost guns are] as deadly as any other weapon out there,” Biden said. “But the fact is: They are out there … this spring, the Justice Department will issue a final rule to regulate these so-called ‘ghost guns.’”

Most of the president’s firearm-related remarks were reiterations of previous statements.

President Biden championed the expanded use of social workers in community policing and his crackdown on people who traffic illegal guns, moves he first endorsed last summer. He also reiterated his desire to limit the sale of high-powered firearms and justified his efforts by reusing his now-infamous rationale that “you couldn’t buy a cannon” when the Second Amendment was created.

However, David Harsanyi of the National Review long ago countered this argument with evidence that people could buy or build their own cannons before and after the creation of the Second Amendment.

Unsurprisingly, the president’s remarks were met with derision by gun-rights groups.

The National Rifle Association urged to the president to focus on criminals rather than guns:

Joe once again proved he's not serious about fixing HIS CRIME CRISIS.

Oh, and which part of "SHALL NOT BE INFRINGED" do you not understand? pic.twitter.com/Y3bwbH9KpI

Gun Owners of America, which describes itself as a “no-compromise gun lobby,” responded to Biden’s statement that “there’s no amendment that’s absolute,” by quoting the Second Amendment, then adding “seems pretty absolute to us.”

“A well regulated Militia, being necessary to the security of a free State, the right of the people to keep and bear Arms, SHALL NOT BE INFRINGED."

According to a Wednesday release by the Pew Research Center, 2020 proved the deadliest year for deaths related to gunfire. In all, more than 45,000 people died because of a gun-related suicide (24,292) or murder (19,384).