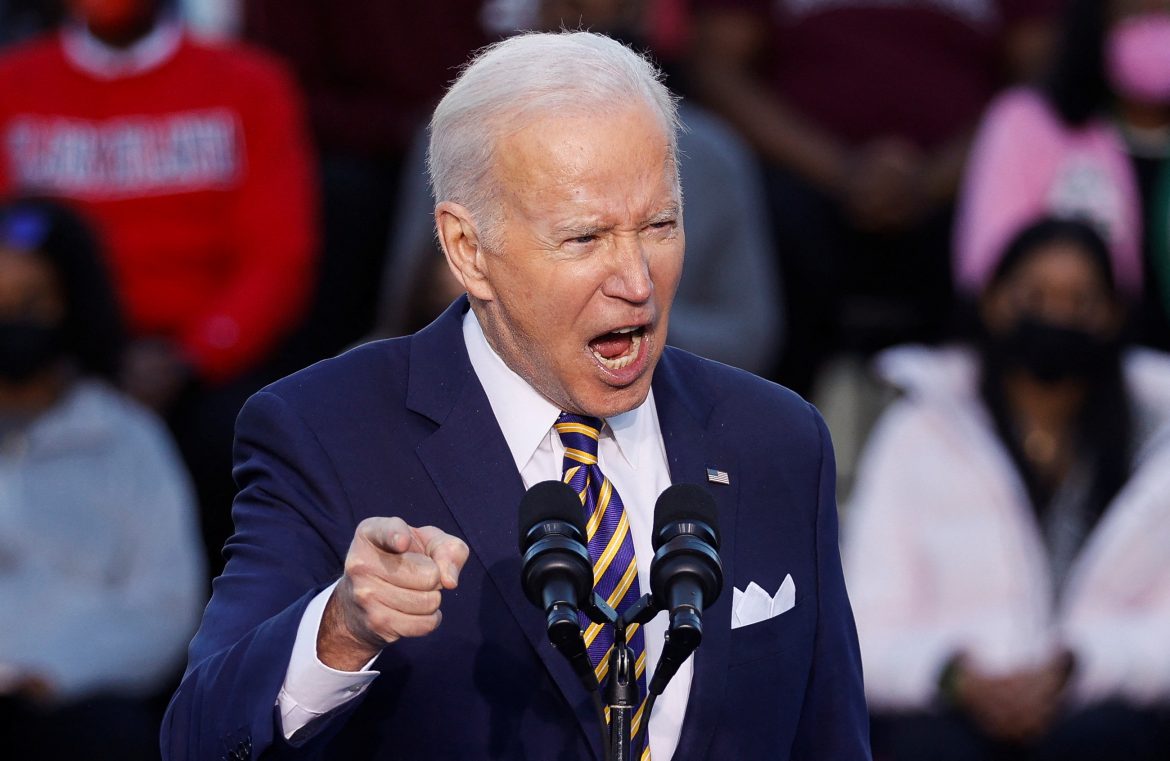 President Joe Biden threw his support behind ending the Senate filibuster on Tuesday to pass the Democrat’s Freedom to Vote Act and the John Lewis Voting Rights Advancement Act. Biden pushed to end the 60-vote threshold during a speech in Atlanta, Georgia where he castigated Republican opponents as being akin to segregationists and confederates.

“I believe that the threat to our democracy is so grave that we must find a way to pass these voting rights bills, debate them, vote,” Biden said during remarks where he described himself as “an institutionalist.”

“Let the majority prevail,” Biden continued, “And if that bare minimum is blocked, we have no option but to change the Senate rules, including getting rid of the filibuster for this.”

He later added, “today I’m making it clear: To protect our democracy, I support changing the Senate rules, whichever way they need to be changed to prevent a minority of senators from blocking action on voting rights.”

Meanwhile, speaking from the Senate floor on Tuesday Minority Leader Mitch McConnell warned the Senate would face a “nuclear winter” where nothing would get done should the filibuster be altered or abolished.

What would a post-nuclear Senate look like? I assure you it would not be more efficient or more productive. I personally guarantee it. Do my colleagues understand how many times per day the Senate needs and get unanimous consent for basic housekeeping? Do they understand how many things would require roll-call votes, how often the minority could demand lengthy debate? Our colleagues who are itching for a procedural nuclear winter have not even begun to contemplate how it would look. Our colleagues who are itching to drain every drop of collegiality from this body have not even begun to consider how that would work.

On Tuesday Democratic Senator Joe Manchin, whose vote would be needed to end the filibuster appeared to agree with McConnell, telling reporters that “getting rid of the filibuster” wouldn’t make the Senate “work better.”

During his floor speech McConnell ridiculed Democrats for their “Jim Crow” rhetoric, calling it “misinformation” and “a Big Lie,” meaning to “justify a top-down election takeover.”

“A sitting President of the United States who pledged to lower the temperature and unite America now invokes the brutal racial hatred of Jim Crow segregation to smear states whose new voting laws are more accessible than in his home state of Delaware.”

McConnell observed that in Georgia, for example, the latest election bill actually “enshrined more early voting and more absentee balloting” than “New York has ever allowed.”

Biden did not shy away from using the racialized rhetoric McConnell condemned, saying “elected officials in America” now have a choice to be on the side of Martin Luther King Jr. or George Wallace in regard to voting rights.

Likewise, Biden referred to Georgia’s election security bill as “Jim Crow 2.0,” designed to suppress voters, adding “It’s not hyperbole; this is a fact.”

Quebec to begin taxing those who are unvaccinated