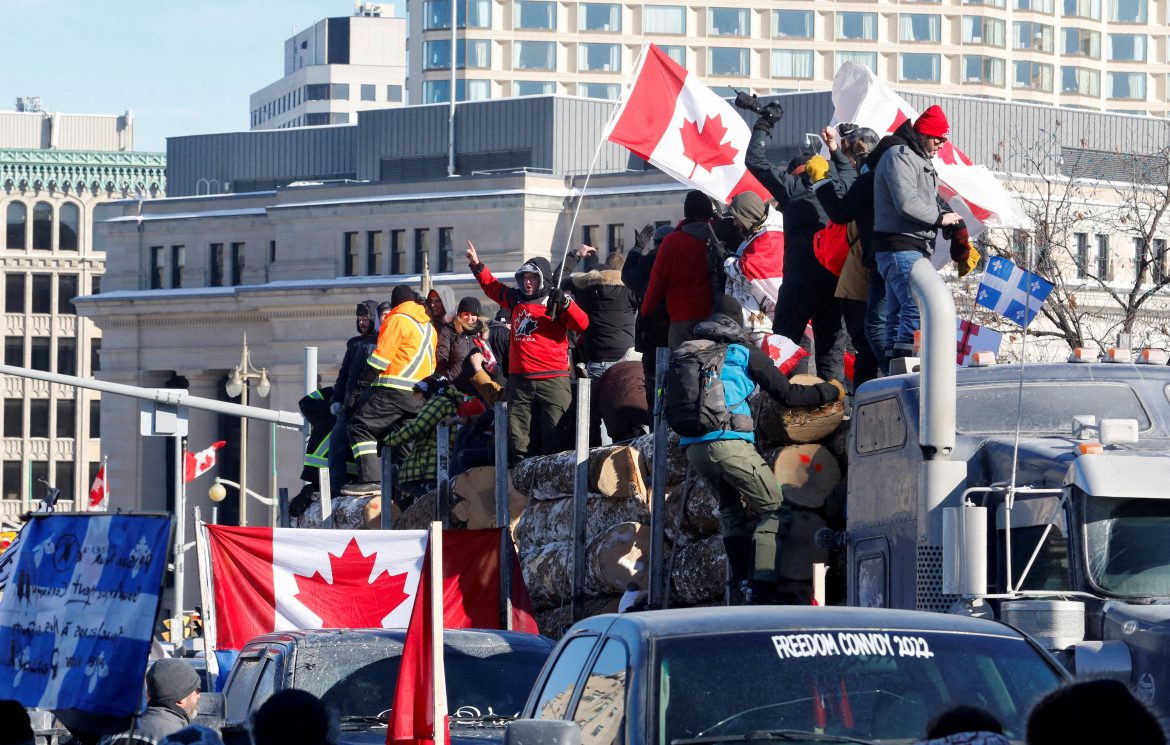 Dozens of trucks and other vehicles blocked the downtown area of Ottawa for a second day after thousands descended on Canada’s capital city on Saturday to protest against Prime Minister Justin Trudeau and COVID-19 vaccine mandates.

Trucks remained parked on the streets near parliament on Sunday morning, a day before lawmakers are due to resume work after the holiday break. Some truckers said they will not leave until the mandate is overturned.

Thousands gathered peacefully on Saturday, though some incidents caused anger. One protester filmed dancing on the tomb of the unknown soldier and the appearance of flags bearing swastikas sparked anger on social media, and a downtown mall shut down because protesters refused to wear masks.

The rally started out as a protest against a vaccine requirement for cross-border drivers but turned into a demonstration against the Trudeau government with a strong anti-vaccination streak.

“Large crowds remained in the downtown core throughout the night,” Ottawa police said in a statement. “Officers encountered several challenges with demonstrators, including sporadic road blockages by trucks… These high-risk situations were de-escalated and resolved with no arrests.”

Due to security concerns, Trudeau and his family left their downtown Ottawa home on Saturday, the Canadian Broadcasting Corp. (CBC) reported. Earlier this week Trudeau said the convoy represented a “small fringe minority” who do not represent the views of Canadians.

About 90% of Canada’s cross-border truckers and almost 79% of the population has had two shots. Canada is now in the middle of a spike in Omicron variant cases that is straining hospitals.

Canada’s Conservative Party supported the protest, which aimed a lot of its anger – in signs and chants – directly at Trudeau. The right-wing People’s Party of Canada, which holds no seats in parliament, turned out at the rally.

“We are super-spreaders of freedom,” People’s Party leader Maxime Bernier said in a speech on Saturday.

But some Canadians took to social media to criticize the behavior of some protesters.

Michael Cooper, a Conservative lawmaker who handed out coffee at the protest, was pictured standing near a Canadian flag bearing a Swastika during a TV interview. He later released a statement condemning the “reprehensible” protester on Twitter.

Canada’s top soldier, Chief of the Defense Staff General Wayne Eyre, denounced a woman filmed dancing on the tomb of the unknown soldier, saying he was “sickened.”

Ottawa Mayor Jim Watson said some protesters had harassed a soup kitchen, demanding free meals because their refusal to wear masks meant they were not to order in restaurants, according to an interview with the CBC.

“You have the right to protest. You’ve had your protest. Please move on,” Watson said.