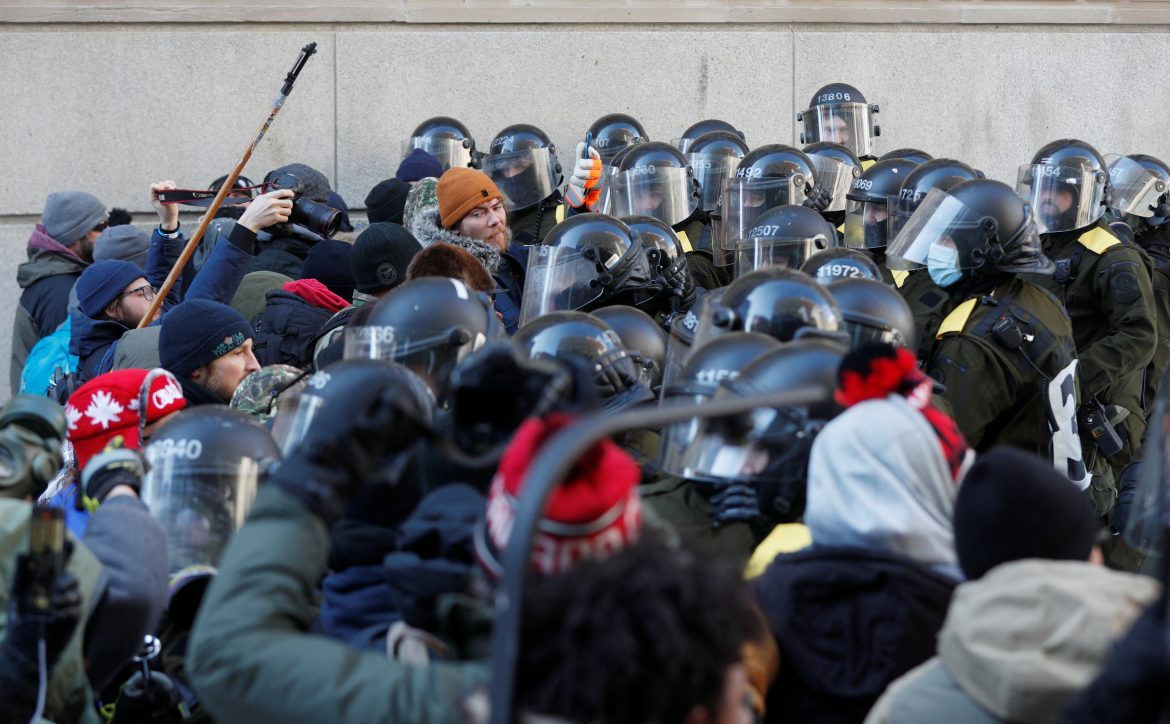 Canadian police on Saturday used pepper spray and stun grenades in a final push to clear the capital after trucks and demonstrators occupied the downtown core of Ottawa for more than three weeks to protest against pandemic restrictions.

“We told you to leave. We gave you time to leave. We were slow and methodical, yet you were assaultive and aggressive with officers and the horses,” police said in a statement to the truckers posted on Twitter.

Police also used loudspeakers to warn the crowd to disperse or face arrest. Some of those arrested on Saturday wore body armor and had smoke grenades and other fireworks in their bags and vehicles, police said.

Again on Saturday, officers smashed vehicle windows to arrest people locked inside, but the overall number of protesters has dwindled dramatically compared with previous days, with a couple hundred remaining near the advancing police cordon.

Some loud bangs of stun grenades were heard, and Reuters witnesses saw some people being pepper sprayed. Protesters were throwing smoke canisters, police said. Several large trucks that have been parked in front of parliament for weeks drove away as the police approached their position.

No tear gas has been used, police said.

Many of the main organizers have been taken into custody, and some have reportedly left. Accused of being heavy-handed by the protesters, especially when sending in Mounties on horseback, police said there had been no serious injuries.

“We hear your concern for people on the ground after the horses dispersed a crowd. Anyone who fell got up and walked away. We’re unaware of any injuries,” police said on Twitter.

The protesters initially wanted an end to cross-border COVID-19 vaccine mandates for truck drivers, but the blockade has gradually turned into a demonstration against the government and against Prime Minister Justin Trudeau.

“This is our final stand … When it ends, it ends and it’s in God’s hands,” said Jeremy Glass, a protester from Shelburne, Ontario. “At the end of this, we all need to get back to unity and get rid of this division.”

Trudeau on Monday invoked emergency powers to give his government wider authority to stop the protests. He authorized banks and financial institutions to temporarily freeze the accounts of those suspected of supporting the blockades, without obtaining a court order.

The federal government said on Saturday it would provide up to C$20 million to Ottawa businesses that have suffered losses due to the blockades.

American politicians, including former President Donald Trump, have expressed support for the protesters, as has Tesla Inc’s chief executive, Elon Musk, who on Saturday replied on Twitter to a woman asking him to help the protesters.

“I wish I could help. At this point, it seems that voting at the next election is the remedy,” Musk replied.

After the protest crowds swelled on the three previous weekends, police set up 100 roadblocks around the downtown core on Friday to deny people access and prevent food and fuel from getting in.

“Our demands aren’t ridiculous. We want mandates and lockdowns dropped,” said a truck driver from Manitoba who gave his name only as Gord, adding that he cannot work anymore because of cross-border vaccine mandates.