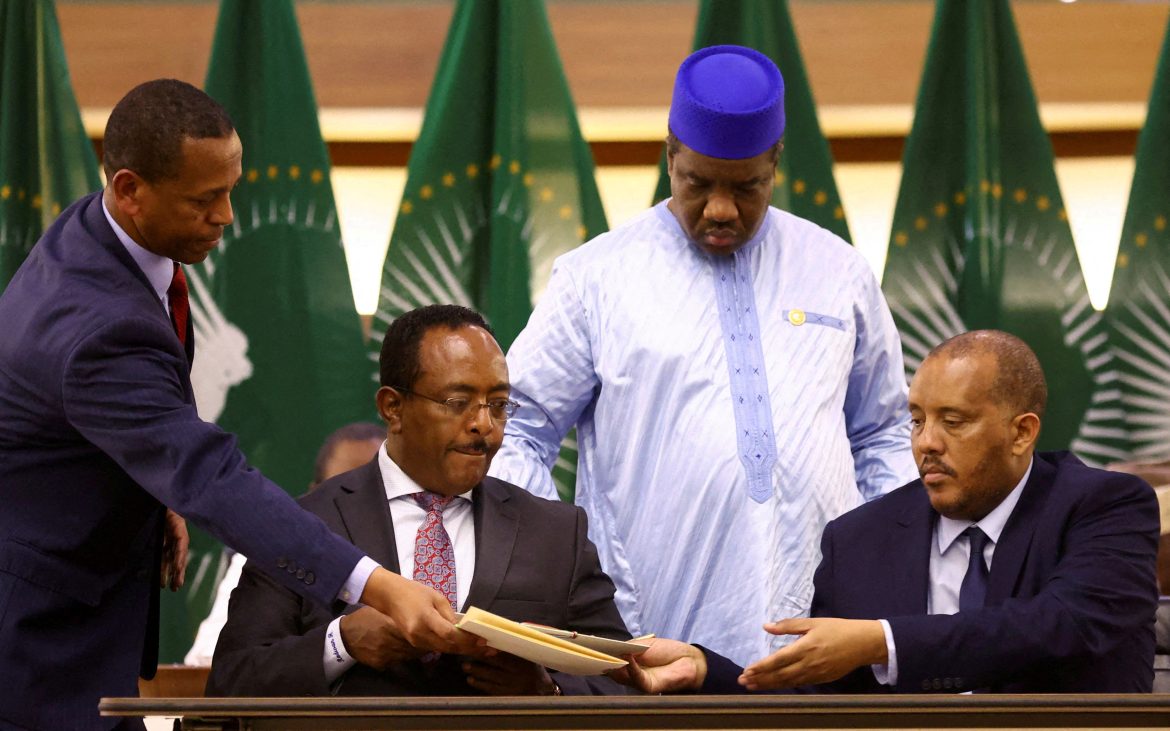 The Ethiopian government and regional forces from Tigray agreed on Wednesday to cease hostilities, a dramatic diplomatic breakthrough two years into a war that has killed thousands, displaced millions, and left hundreds of thousands facing famine.

Just over a week after formal peace talks mediated by the African Union (AU) began in the South African capital Pretoria, delegates from both sides signed an agreement on a “permanent cessation of hostilities”.

“The two parties in the Ethiopian conflict have formally agreed to the cessation of hostilities as well as to systematic, orderly, smooth, and coordinated disarmament,” said Olusegun Obasanjo, head of the AU mediation team, at a ceremony.

An agreement had not been expected so soon. Earlier on Wednesday, the AU had invited media to what it described as a briefing by Obasanjo. It was only when the event began, about three hours behind schedule, that it became clear a truce was about to be signed.

“This moment is not the end of the peace process. Implementation of the peace agreement signed today is critical for its success,” said Obasanjo, adding that this would be supervised and monitored by a high-level AU panel.

Obasanjo, who stepped down as Nigeria’s president in 2007 and has since mediated conflicts across Africa, praised the process as an African solution to an African problem.

Ethiopia‘s Prime Minister Abiy Ahmed expressed gratitude to Obasanjo and other mediators at the conclusion of the peace talks, saying in a statement the government’s commitment to the implementation of the agreement was strong.

“Our commitment to peace remains steadfast. And our commitment to collaborating for the implementation of the agreement is equally strong,” the statement on Twitter said.

‘Major concessions from both sides’

At the Pretoria ceremony, Getachew Reda, a spokesman for the Tigray authorities, spoke of the wide-scale death and destruction in the region and said it was his hope and expectation that both parties would honor their commitments.

U.N. Secretary-General Antonio Guterres said the truce was a welcome first step that would bring solace to millions of civilians who have suffered in the conflict, according to a U.N. spokesman.

Alan Boswell, Project Director for the Horn of Africa at the International Crisis Group, said the first huge test would be whether the parties immediately stopped fighting as agreed.

“This is a huge breakthrough that involved major concessions from both sides, even if the parties punted the thorniest details to future peace talks,” he said.

“If they do stop fighting, then today will just be the start of what will surely prove a very bumpy, long, and difficult peace process.”

Troops from Eritrea, a separate country that borders Tigray, as well as forces from other Ethiopian regions, have taken part in the conflict on the side of the Ethiopian army.

Neither Eritrea nor the regional forces participated in the talks in South Africa and there was no mention at Wednesday’s ceremony of whether they would abide by the truce.

“I’m very happy because this will put a hold on the suffering,” said one Tigrayan man in the Ethiopian capital Addis Ababa who declined to be identified for fear of repercussions at his workplace.

“We still have questions on the agreement … we didn’t hear anything about Eritrea. I hope that it will be in the details.”

The war stems from a catastrophic breakdown in relations between the Tigray People’s Liberation Front (TPLF), a guerrilla movement turned political party that dominated Ethiopia for 27 years, and Abiy, who was once part of their ruling coalition but whose appointment in 2018 ended the TPLF’s dominance.

Escalating tensions in 2018-20, including over Abiy’s peace deal with the TPLF’s sworn enemy Eritrea, and the TPLF’s decision to defy him by holding regional elections in Tigray that he had postponed nationwide, tipped the parties into war.

Wednesday’s agreement does not address the deeper political tensions that contributed to the conflict.

The AU said in a statement it stood ready to continue accompanying the Ethiopian peace process “towards a more democratic, just and inclusive Ethiopia in which youth, women and men participate fully and in peace”.

“The lasting solution can only be dialogue,” said former Kenyan president Uhuru Kenyatta, a co-mediator in the talks.

The TPLF has accused Abiy of centralizing power at the expense of the regions and oppressing Tigrayans, which he denies, while Abiy has accused the TPLF of seeking to return to power at the national level, which it rejects.

The United Nations says the war has led to a de facto blockade of Tigray that has lasted close to two years, with humanitarian supplies of food and medicines unable to get through most of the time.

Some aid supplies did get delivered to Tigray between March and August this year during a temporary ceasefire, but fighting restarted in August and the World Health Organization said last week Tigray had run out of vaccines, antibiotics, and insulin.

It said health facilities were resorting to using saline solutions and rags to treat and dress wounds.

The government has consistently denied blocking aid and has said it was distributing food and restoring electricity and other services to areas under its control.

Human rights violations by all sides in the war, including extra-judicial killings, raping, looting, and displacing people by force, have been documented by U.N. bodies, Ethiopia‘s state-appointed human rights commission, independent aid groups, and media including Reuters.

All sides have denied the allegations.