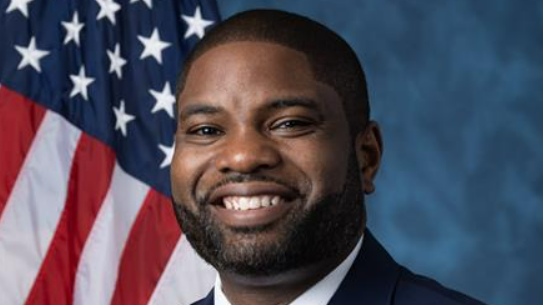 ORLANDO – Rep. Byron Donalds (R-Fla.), at 43, was among the younger people to speak at CPAC Friday, and he spoke with the voice of a man raising children in an era of wanton inflation.

Donalds, who prior to his entry to public service had a burgeoning career in the business sector, ripped the fiscal policies of Democrats and President Joe Biden in a brief, but forceful speech.

He accused Democrats of engaging in “Socialist propaganda” and “gaslighting” as they pushed for the American Rescue Plan and Build Back Better, and of attempting to steer America’s youth toward socialism.

Donalds said he became concerned about the rise in socialist advocacy in American classrooms after he visited a school in which Marxist economic theory was treated as equally successful to capitalism.

“The very textbook that sits in an American classroom made it seem as if both sides have a legitimate argument,” Donalds said. “This is how far they’ve gone. But if you examine world history there is no equivalent argument … Free-market capitalism is the very thing that has allowed all of us to grow, to thrive, and to succeed.”

The congressman also criticized Democrats for campaigning against capitalism while benefiting from its fruits.

“The Left loves to deride Capitalism, but they actually love Capitalism,” Donalds said. “They love what it creates for them, but they want you and they want me and they want every hard-working American to bend the knee.” He later added, “Their design is to make sure the elites in our country and the useful idiots in Washington, D.C., are the ones that control our economy. And their targets are the young.”

However, Donalds said Conservatives can win the battle for young hearts by focusing on what capitalism has yielded for a generation that has grown up in an instant-gratification world.

“They have at their fingertips the very manifestation of what a free-market economy and a free society allows,” Donalds said. “So the political question of our time for all young Americans is, do you want to still be able to choose whatever you want, whenever you want it, at a moment’s notice and be able to get it? Or do you want to listen to Joe Biden? … I believe we can win that argument. I believe that Conservatives can win that debate every single day.”

The danger, Donalds said, was in remaining silent.

“There is no reason that we should be quiet and let Bernie Sanders or Elizabeth Warren tell us how economies should be run,” Donalds said. “I mean, look at how stupid they are. These are the same people who said that it was a bright idea to end energy production in these United States and to buy oil from the Russians and the Iranians … who would rather subjugate Americans to second- or third-tier status. And these bright bulbs of the dim left actually think that’s a smart economic plan.”

Donalds, a Christian and father of three, was elected to represent Florida’s 19th District in 2020 when he replaced retiring Republican Congressman Francis Rooney.