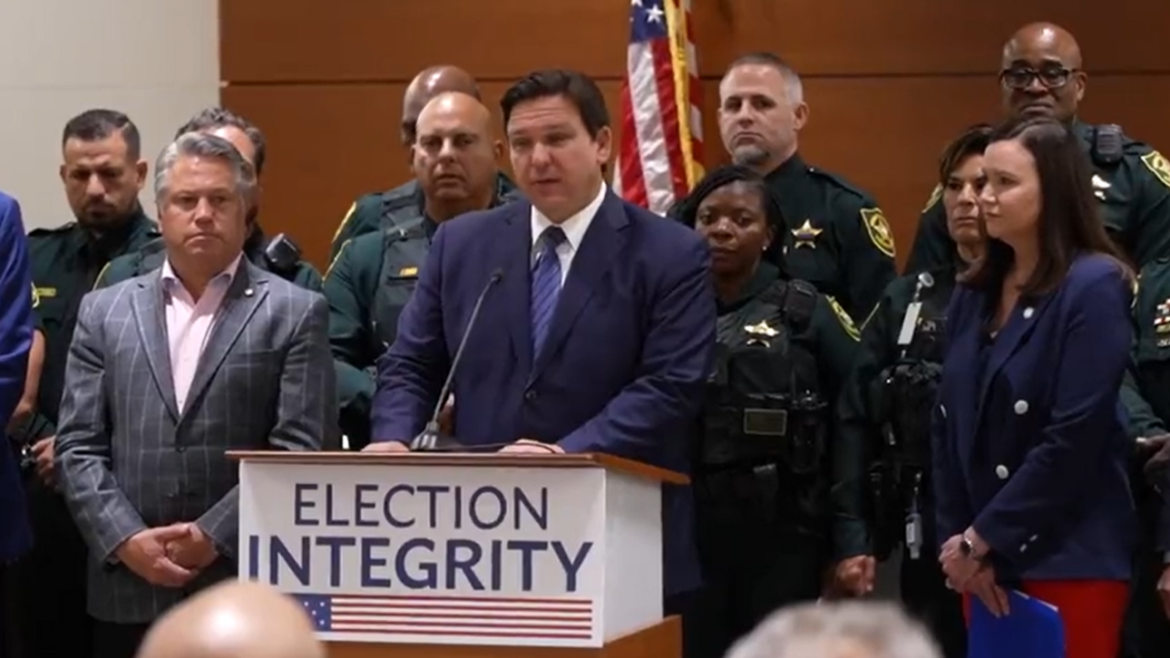 Florida Gov. Ron DeSantis, a Republican, announced Thursday that an investigation by two state agencies had resulted in the arrest of 20 people who are accused of illegally participating in the 2020 election.

According to a release from the governor’s office, all 20 individuals – primarily hailing from large metropolitan cities like Tampa, Miami, and Orlando – have previously been convicted of either murder or sexual assault, felonies that carry with them the lifetime loss of voting privileges in Florida.

In 2020, FL ran one of the most secure & transparent elections in the US, but we have more work to do. That's why I established an election crimes unit. @fdlepio has charged 20 murderers & sex offenders who weren't eligible to vote w/ election fraud. They face 5 yrs in prison. pic.twitter.com/eNXksxOtEI

The arrests were the result of the first major operation by the Florida Office of Election Crimes and Security which opened on July 1 as a result of an election integrity bill signed into legislation by DeSantis in May. They completed the investigation alongside the Florida Department of Law Enforcement.

“In 2020, Florida ran an efficient, transparent election that avoided the major problems we saw in other states,” DeSantis said in a statement. “At the same time, the election was not perfect, which is why we continue our efforts to ensure the integrity of our elections.”

Florida Attorney General Ashley Moody praised DeSantis at the press conference stating that the action of the new elections security division is reinforcing the trust that people place in democracy:

As elected leaders, it is incumbent on us to ensure free and fair elections and instill confidence in the voting process. No voting system can stand without the backing and confidence of the people it serves, and thanks to Governor DeSantis, we are reinforcing that trust, and Florida’s elections system will serve as the standard-bearer for the rest of the nation.

According to a more robust report in the Tampa Bay Times, critics say DeSantis is playing politics and targeting Democrat and minority counties.

“When there were people who voted twice in The Villages, a retirement community, he did not do a press conference there,” Andrea Mercado, executive director of Florida Rising, a progressive political group, told the Times. “This is all part of his campaign for governor and ultimately for his presidential ambitions.”

Mercado also stated, “Broward County is the Blackest county in the state and the bluest. He’s chasing down these very rare cases to make an example and legitimize his crackdown.”

But, contrary to these claims, there were arrests in The Villages for voting crimes. From late 2021 through early 2022, four Villages residents were charged with fraud after they allegedly cast more than one vote in 2020.

DeSantis indicated state officials did not “want to be selective about” enforcement and that he expected to expand the prosecutions.

Prior to the 2020 election, Florida voters approved Article 4, a measure that allowed the restoration of voting rights to many convicted felons. The idea behind the new law was to allow people, often but not exclusively drug offenders, a chance to rehabilitate themselves and eventually regain their voting rights.

However, the law explicitly states — and was promoted to voters based upon the fact that — people convicted of murder and sex crimes will never have their voting rights restored.

“[We] are off to a great start at eliminating election fraud in our elections,” Secretary of State and Chief Election Officer Cord Byrd said in a statement. “These arrests put those who have no regard for the integrity of our elections on notice and will ensure integrity in the voting process.”