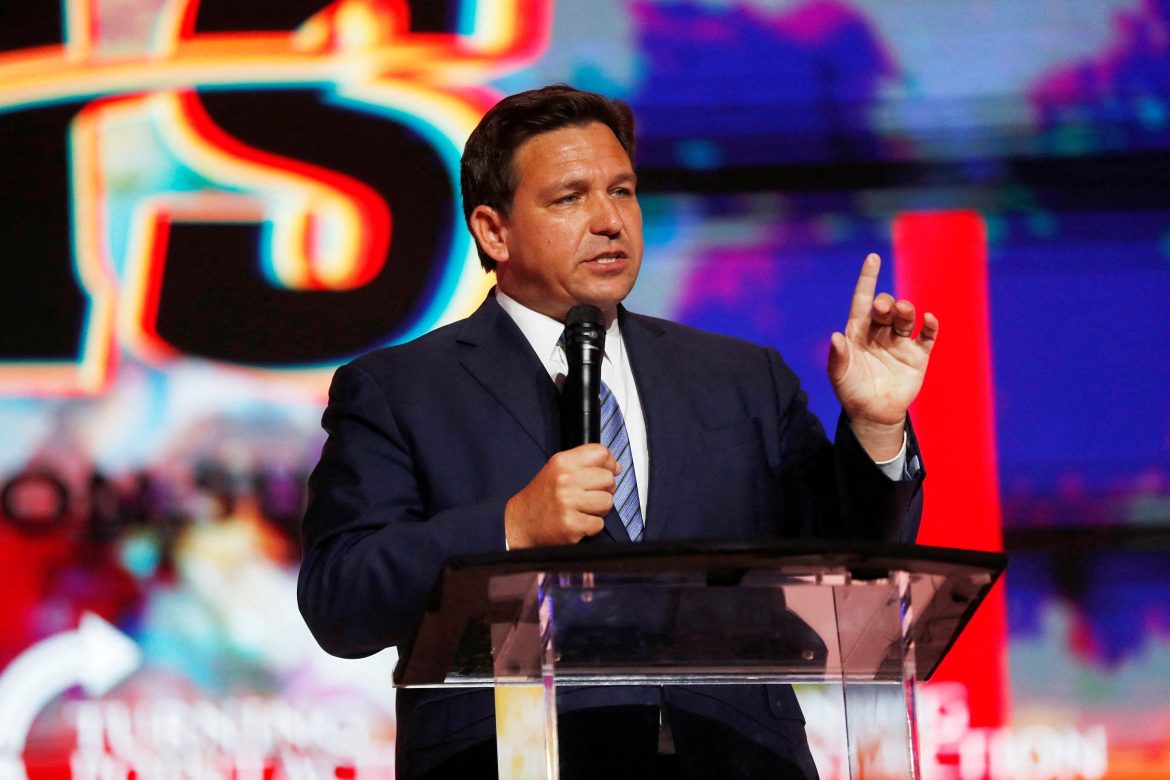 Florida Gov. Ron DeSantis announced Thursday that he had suspended a Tampa-area state attorney who had previously stated he would not seek to prosecute violations of Florida’s new abortion law and promised to support the rights of children to receive gender reassignment surgeries.

During a Thursday press conference, one in which he was joined by numerous law-enforcement officials, DeSantis said he was invoking authorities assigned to him under state law and suspending Hillsborough County State Attorney Andrew Warren on the grounds of neglect of duty.

“Prosecutors have a duty to enforce the law, not pick and choose which laws they agree with,” DeSantis tweeted after his press conference. “The State Attorney for the 13th Judicial Circuit, Andrew Warren, has instituted nonenforcement policies and has declared that he will refuse to enforce laws he doesn’t like.”

Prosecutors have a duty to enforce the law, not pick and choose which laws they agree with.

The State Attorney for the 13th Judicial Circuit, Andrew Warren, has instituted nonenforcement policies and has declared that he will refuse to enforce laws he doesn’t like. pic.twitter.com/EbSbCRrLHa

Warren, a Democrat, had tweeted in June that he would not prosecute anyone accused of violating Florida’s new, more restrictive abortion law, one that placed a ban on abortions after 15 weeks. He also pledged to not enforce any law that prevented gender reassignment surgery for children or restricted transgender bathroom access, even though no such laws currently exist in Florida.

The governor’s order contained a laundry list of complaints against Warren, all of which DeSantis described as policies through which Warren issued “blanket refusals” to enforce certain Florida laws.

“Warren demonstrated his incompetence and willful defiance of his duties as a state attorney as early as June 2021, when he signed a ‘Joint Statement’ with other elected prosecutors in support of gender-transition treatment for children and bathroom usage based on gender identity,” DeSantis’s order reads. In another portion of the order, DeSantis states, “Warren’s neglect of duty is willful and meant to be a ‘functional veto’ on the policies of the Florida Legislature.”

Various Florida Democrats and Warren himself have labeled DeSantis’ move as one motivated by politics, unconstitutional, and an abuse of gubernatorial authority.

“Today’s political stunt is an illegal overreach that continues a dangerous pattern by Ron DeSantis of using his office to further his own political ambition,” Warren tweeted Thursday. “It spits in the face of the voters of Hillsborough County who have twice elected me to serve *them*, not Ron DeSantis.”

Today’s political stunt is an illegal overreach that continues a dangerous pattern by Ron DeSantis of using his office to further his own political ambition. It spits in the face of the voters of Hillsborough County who have twice elected me to serve *them*, not Ron DeSantis… pic.twitter.com/RzPXksSSWa

Florida law allows a governor to suspend public officials, even elected ones like Warren, for a litany of reasons, among them neglect of duty.

In keeping with Democratic tradition, Fried posted this tweet in conjunction with an appeal for a donation.

Other Democrat organizations argue Warren has a right to choose which crimes he prosecutes.

Fair and Just Prosecution, which describes itself as “a national network of elected prosecutors working towards common-sense, compassionate criminal justice reforms,” made such an argument.

Importantly, Fair and Just Prosecution is the organization through which Warren co-signed the joint statements that led to his suspension.

“Prosecutors have a duty to pursue the interests of justice and use their limited resources to investigate and prosecute those crimes that cause the greatest harm to communities,” Fair and Just Prosecution Executive Director Miriam Krinsky said in a statement. “No prosecutor can charge or pursue every violation of the law, and for decades, prosecutors have been making these choices.”

Krinsky added, “Using prosecutorial discretion and not pursuing unjust laws is not neglect of duty but a fierce commitment to justice” and “Governors don’t hand-pick elected prosecutors, the voters do. With this outrageous overreach, Gov. DeSantis is sending a clear message that the will of the people of Hillsborough County matters less than his own political agenda.”

It is worth noting that neither Krinsky nor the organization she heads appear to value the will or intellect of all voters equally. When Fair and Just Prosecution member and San Francisco District Attorney Chesa Boudin was recalled in early June, following a rash of crime in the city and his inability or unwillingness to address it, Krinsky insinuated that San Francisco voters had fallen for “a deep-pocketed special interest campaign that peddled fear and disinformation.”

DeSantis, himself an attorney, seems to have anticipated Fair and Just’s retort and stated in the order that prosecutorial discretion does not apply in this case.

“Warren’s neglect of duty is not excused by prosecutorial discretion, because his blanket policies ensure that he will exercise no discretion at all in entire categories of criminal cases,” the order reads.

DeSantis was not alone in his anger at Warren. At the press conference, Polk County Sheriff Grady Judd, perhaps best known for his viral YouTube videos, spoke against Warren and other prosecutors across the nation who Judd said have been soft on crime.

“The governor should not have had to come to Hillsborough County and clean up our mess,” Dugan said. “That’s really what it comes down to.”

Hillsborough County Sheriff Chad Chronister, whose office works closely with Warren, was unflinching in his criticism of the suspended attorney. Chronister said Warren has sought to act as a “supreme authority” by “reducing charges, dropping cases and singlehandedly determining what crimes will be legal or illegal in our county.”

Chronister also described a case in which an alleged gang member shot one person and then fired into a home, endangering the lives of women and children, but was not prosecuted.

“The victim has lived in a hotel since the shooting because she is too afraid to return to her home,” Chronister said.

“I have the utmost respect for our state laws and I understand the important role that the State Attorney plays in ensuring the safety of our community and the enforcement of our laws,” Lopez said.