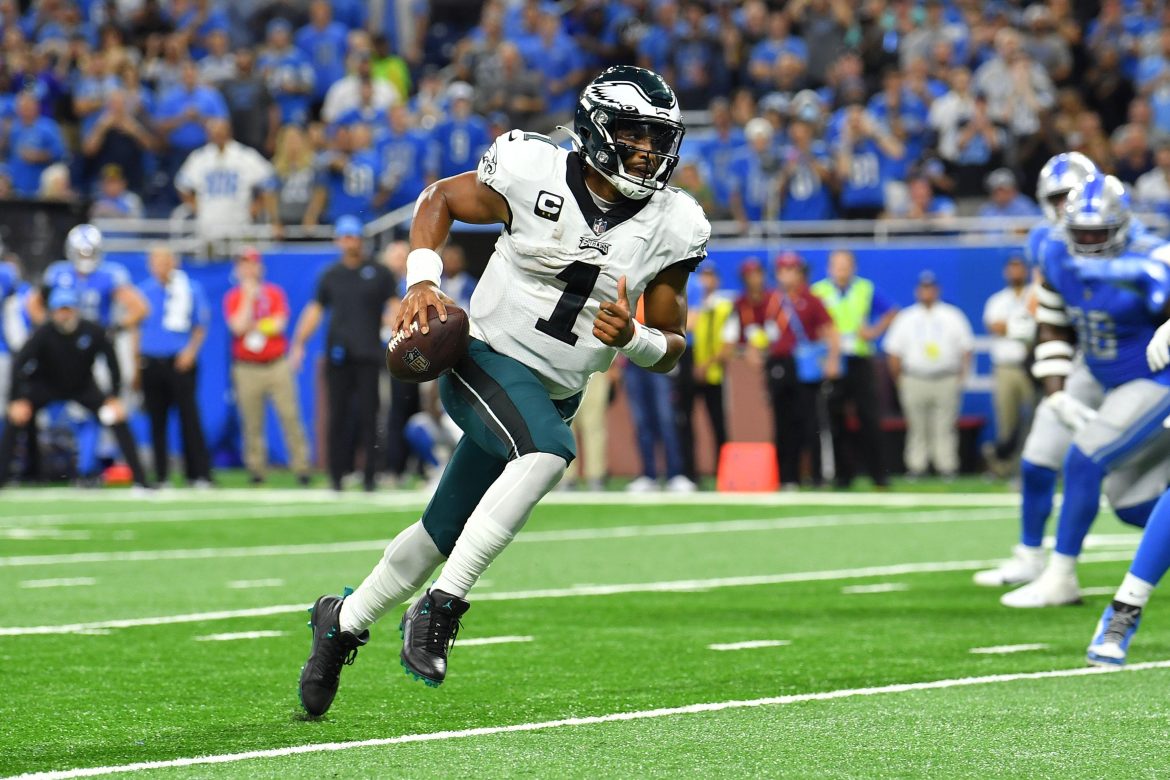 It is always encouraging to see believers in the sphere of entertainment and sports give glory to God. One of the latest to do so is the dynamic third-year starting quarterback for the Philadelphia Eagles, Jalen Hurts.

Hurts has captured the attention and respect of the notoriously tough Philly fanbase for his leadership and dynamic physical ability.

In only his second season, his first as a starter, he led the Eagles to a surprise playoff birth and a winning record in 2021, despite many oddsmakers writing them off as a last-place team. Hurts started hot out the gate in 2022, leading the Eagles to a 2-0 start and the top of the NFC East. He is coming off perhaps the most impressive win of his young career, a prime-time domination of the Minnesota Vikings, 24-7, this past Monday night.

Through it all, Hurts has maintained a level of humility and steadiness, driven by his love for Christ.

In an interview with CBS Sports just before the Eagles’ 38-35 week 1 victory over the Detroit Lions, Hurts shared that his life is centered on God and that God is worthy of praise.

That’s something that I’ve just matured in and realized – that God is everything and He’s worthy of praise. You have to put Him in the center of everything that you do … I keep God at the center of everything. I give Him all the praise. I lean on Him all the time. And I know that everything unfolds the way it’s supposed to. … I just want to set the right example, and I want to be remembered [as] someone who made a difference. You know – that’s an everyday thing. It’s something that I think about every day.

Eagles fans have been circling this coming Sunday’s matchup with the Washington Commanders on their calendar since the NFL schedule was released, as Hurts will face off against the man he backed up as a rookie, Carson Wentz.

Wentz, also a professing Christian, spent his first five seasons as an Eagle and played a vital role in the franchise’s first Super Bowl victory back in 2017. However, many fans believe he was driven out of town partially because he clashed with teammates and lacked Hurts’ team-first attitude and leadership ability.

The Eagles and Commanders meet at 1 p.m. this Sunday at FedEx Field in Landover, Maryland.

Christian Athletes have a rare opportunity to use their platform and reach to spread the gospel to millions of people at one time. The 24-year-old Jalen Hurts is in a prime position to do this, and Christians need to pray for him and many other young men like him, that they would use their talents not for personal glory but for the glory of God.

This is the encouragement for Christians from this report – No matter what you do, do it for the glory of God.

No matter what you do in your life, whether it is working a job, staying at home with your children, going to school, loving your spouse, or playing a professional sport like Hurts, this can be an act of praise to God. As you seek to give glory to God, consider a few reminders.

Another example from the realm of sports is the late Reggie White, an NFL Hall of Fame defensive end who, like Hurts, won the respect of the hard-nosed Philadelphia fanbase during his eight seasons with the Eagles in the 1980s and 90s. White, known as the “Minister of Defense,” was an outspoken Christian who made it his life goal to be the best defensive end in the history of the NFL, but not for personal gain. His end goal was to make much of the name of Jesus Christ.

I’ve always believed since I was a kid that God was going to allow me to play professional football, to use it as a platform to proclaim and live out the name of Jesus.

This leads to our second reminder – Do nothing out of selfish ambition, but do it all for God’s glory.

It is a difficult balance to be an expert at a craft, experience success, be showered with the praise of man, and then maintain humility that says “All glory to God.” But this is what Christians must do. We must do our very best, and when success comes, we must deflect the praise to our Maker. Why?

It is simple – God, the giver of all good gifts, is the one to thank. He gave the gift for His glory, and He can take it away if He so chooses.

This is the right place for the Christian. It is a place of humility, complete reliance upon the goodness of God, and a place of utter gratitude toward God. Most of all, it points us to the gospel.

Of all the gifts you may have received from God in this life, none can compare to the gift of salvation. Like your talents, you did nothing to earn salvation. It was paid in full by the Lord Jesus Christ on the cross. It is given to all who would repent and believe on the name of the Lord Jesus, as a gift from a loving God. Unlike the talents we have in this life, which we may lose someday, we can never lose that beautiful gift of salvation. Once a person is saved, they are forever saved.

You have been given a golden opportunity to share the gospel and make much of the name of Jesus Christ in the skills He has given you. Do not waste it. Do your very best, for the glory of God.

And whatever you do, whether in word or deed, do it all in the name of the Lord Jesus, giving thanks to God the Father through him.  – Colossians 3:17