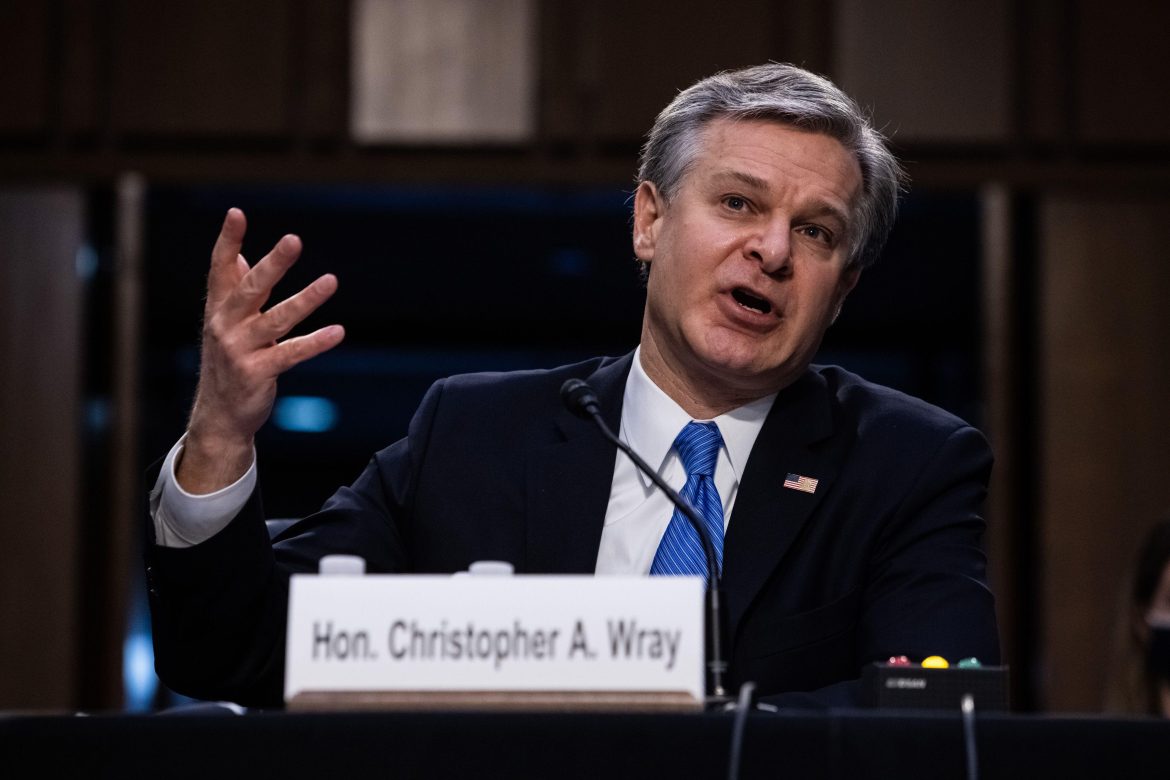 FBI Director Christopher Wray’s appearance before the Senate Judiciary Committee was a parade of pessimism as Wray lamented a national uptick in violence, admitted the situation at the southern border has reached the point of chaos, and sought to mitigate allegations his agency has an anti-conservative bias.

Sen. Ted Cruz (R-Texas) pressed Wray on a recent Project Veritas report which included a leaked FBI document that appeared to link such symbols as the Gadsden flag and the Betsy Ross flag as potential symbols of extremism and listed numerous groups as militia violent extremists.

“Director Wray, what are you all doing?” Cruz asked. “This makes no sense. Do you agree with this FBI guidance that the Betsy Ross flag and the Gadsden flag and the Gonzales Battle flag are signs of militia violent extremism?”

Cruz also asked why symbols associated with Black Lives Matter and Antifa do not appear on the document.

“Instead, you identify patriotic Americans as suspects,” Cruz said.

Wray responded, “Senator, I am not familiar with the document behind you and I’m not in the practice of trying to comment on a document that I haven’t recognized. But, I will tell you that when we put out intelligence products, including ones that reference symbols which we do across a wide variety of contexts, we usually make great pains to put caveats and warnings in the document that make clear that a symbol alone is not considered evidence of violent extremism.”

It remains unclear if a similar document exists in which violent left organizations and their symbols are addressed.

When the topic of discussion shifted to the now-infamous, at least in conservative circles, school board letter sent by Attorney General Merrick Garland, Wray testified that he was unaware of any investigations or prosecutions of parents who spoke up at school boards.

“Let me say to you and to this committee the same thing I said to every FBI field office after I read the memo, which was that the FBI is not going to be in the business of investigating speech, to policing speech at school board meetings or anywhere else,” Wray told Cruz. “And that we’re not about to start now.”

On actual threats of violence, Wray said, “that’s a different matter altogether and there we will work with our state and local partners as we always have.”

Wray faced a different line of questions from the other Republican senator from Texas. Sen. John Cornyn tried to get Wray to disagree, on the record, with Secretary of Homeland Security Alejandro Mayorkas’ previous characterization of the southern border.

“When Director Mayorkas was asked about the border, he made the, frankly, from my standpoint, implausible statement that the border was secure,” Cornyn said. “From your vantage point, in your opinion, is the border secure?”

Wray responded with a brief statement in which he attempted to both empathize with federal agents working on the border and avoid taking a definitive stance against a cabinet member.

“I’m hesitant to substitute my judgment for the Secretary of Homeland Security, but I will tell you that I have spent a lot of time with our field offices down that have border responsibility,” Wray said. He added that, having toured the border, “I could really see firsthand what [federal agents are] up against, and all I can say is boy, they’ve got a heck of a challenge and I admire their grit and determination to get the job done, but it’s a daunting one.”

Cornyn was not satisfied with that answer, which he identified as no answer at all. When Cornyn asked Wray for a more direct response, the director replied, “Well, look, I think the border presents significant security issues. There’s a wide array of criminal threats that we encounter down at the border.”

Wray further agreed with Cornyn’s assertion that there were migrants representing hundreds of nationalities at the southern border.

“To me, it represents a significant security issue and represents a wide array of criminal threats that flow out of it,” Wray said.

Wray’s preference on the day was to address an issue that, on its face, seems bipartisan – an increase in violent crime across the nation.

“I feel like every day I’m getting briefed on somebody throwing a Molotov cocktail at someone for some issue,” Wray said. “It’s crazy.”

Wray pointed to Supreme Court decisions, lingering angst over the result of the 2020 presidential election, and a general sense of division in the U.S. as some reasons for the spike. He also spoke of his concern about the rise of attacks on law enforcement officers.

“I don’t care what side of the issue you are on,” Wray said. “You don’t get to use violence or threats of violence.”