Fentanyl crisis becomes leading cause of death in young Americans 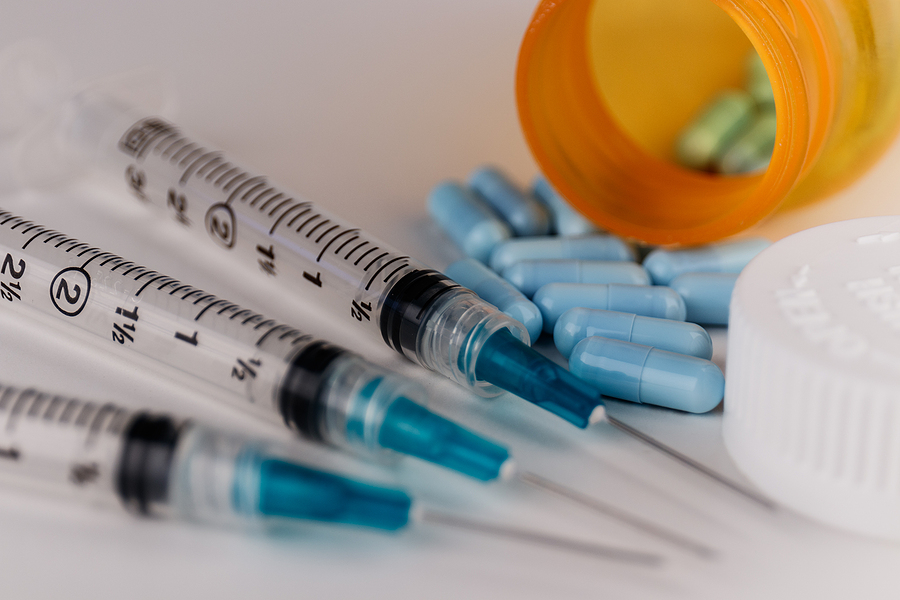 An independent data analysis conducted by Families against Fentanyl (FAF) claims that fentanyl poisoning is now the top cause of deaths in young Americans at a rate that far surpasses the impact Covid-19 has on the same age bracket.

The analysis maintains that the data was hidden in official numbers reported by the Center for Disease Control:

Buried in the CDC data:
🚨Fentanyl poisoning is now the #1 Cause of Death Among Americans 18-45🚨

The data shows alarming trends, including how fentanyl deaths doubled among those aged 18-45 from 2019 to 2021. To make this comparison, FAF founder James Raugh, who lost his son to fentanyl poisoning, compiled data for multiple years with each year ending in the month of April. The period ending April 2019 showed 32,754 fentanyl-related deaths. In 2021, the data highlighted how the fentanyl epidemic has skyrocketed, accounting for 64,178 fatalities.

FAF’s datasheet shows that fentanyl has killed more Americans in this age bracket than suicide, Covid-19, and car accidents combined. This adds credence to many who believe that both the border crisis and lockdown measures have exacerbated an already deadly epidemic of drug smuggling and drug use.

“This is a national emergency. America’s young adults, thousands of unsuspecting Americans, are being poisoned. It is widely known that illicit fentanyl is driving the massive spike in drug-related deaths,” Raugh said.

A separate fact pulled from another U.S. data source shows that over 42,602 fentanyl deaths occurred in the first five months of this year alone. Overall, FAF’s chart shows that almost four times as many deaths occurred from fentanyl poisoning than Covid-19 in the 18-45 age bracket. 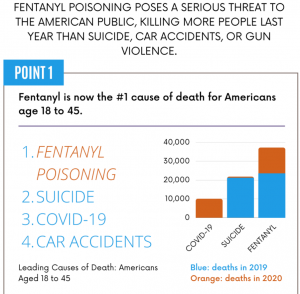 Fentanyl is dangerous because it can be used to lace other drugs, like heroin, methamphetamines, and marijuana and even a small amount can be deadly. To date in 2021, border officials have seized and prevented 11,000 pounds of fentanyl from entering the U.S.

Raugh’s proposed solution is to designate the drug as a weapon of mass destruction (WMD), calling it a “bold action” to “root out the international manufacturers” before it crosses into the U.S. Raugh insisted in his Twitter thread that this would not disrupt legal prescriptions of the drug, just like the WMD designation of botulinum toxin does not prevent legal access to Botox.

Raugh received pushback from some on how he compiled his data-set, including accusations that he misrepresented the information because his referenced CDC numbers did not specify fentanyl overdoses:

https://t.co/So1JHISgfD the data set where your numbers came from also does not make any sense. “Unintentional accidents” isn’t a synonym for “drug overdose.” These accidents include car accidents, falls, etc.

Supporters of FAF linked to a second fact sheet that helped show where the numbers came from, refuting that the data was skewed.

In other tweets, Raugh claimed to be informed and supported by U.S. counterterrorism officials who have recognized the potential of aerosolized fentanyl as a terrorist weapon. The FAF founder claims that a weapon of mass destruction designation would enable the U.S. to track down illegal forms of the drug at their source to prevent them from becoming a security risk after passing through national borders.

Raugh additionally asked those in support of a WMD designation to sign his petition. FAF has previously requested that the White House place this label on fentanyl in a letter that received bipartisan support from individuals connected with or formerly part of the CIA, homeland security, DEA, and White House staff.

Designating fentanyl as a WMD is a critical way to right-size our approach to this rapidly escalating crisis. Quickly. Using a solution that is already in the books.

I find that international drug trafficking — including the illicit production, global sale and widespread distribution of illegal drugs, the rise of extremely potent drugs such as fentanyl and other synthetic opioids, as well as the growing role of internet-based drug sales — constitutes an unusual and extraordinary threat to the national security, foreign policy and economy of the United States.