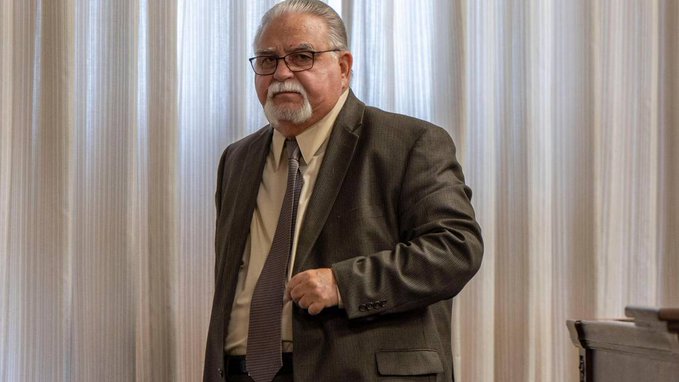 A former Kansas police detective and three others have been indicted by a grand jury on charges related to a violent sex trafficking operation in the 1990s that preyed on troubled teenage victims.

Former detective Roger Golubski, 69; Cecil Brooks, 60; Lemark Roberson, 60; and Richard Robinson, 58, were each charged with conspiracy against rights and two counts of involuntary servitude in the indictment that was unsealed on Monday, The Associated Press reported.

Prosecutors allege that between 1996 and 1998, Brooks, Roberson, and Robinson beat, sexually assaulted, and threatened young women to force them into sexual servitude at the Delavan Apartments in Kansas City owned by Brooks. Golubski, who was a Kansas City police officer at the time, is accused of raping one of the victims and has also been charged with taking bribes from the other men in exchange for shielding their crimes from law enforcement.

According to the indictment, most of the alleged victims were teenage girls ranging in age from 13 to 17 who had fled broken homes and/or struggled with drug addiction. Some of the young women at the time had been recently released from a nearby juvenile detention center, which has since been shuttered.

Prosecutors said that the defendants also supplied drugs to the young women.

The Kansas City Star reported that one of the victims told the grand jury that Roberson raped her, beat her with an iron, and threatened to kill her. A second woman testified that she was forced as a teenager to have sex with different men, including Golubski, and that she managed to flee the apartment building months later.

Golubski was indicted in September on six federal counts in a separate case in which he was convicted of kidnapping and sexually assaulting a woman and a teenage girl from 1998 to 2002. Prosecutors believe that he stalked and raped additional victims. Golubski was placed on house arrest over the prosecutors’ objections. His attorney, Chris Joseph, said on Monday that his client remained on pretrial release. Joseph issued an email statement asserting that Golubski “maintains his innocence and looks forward to clearing his name from these decades-old and uncorroborated allegations.”

Federal agents arrested Roberson in Cleveland and Robinson in Topeka on Monday. Brooks is currently serving time at the Federal Medical Center in Fort Worth, Texas after pleading guilty in 2009 to drug trafficking charges.