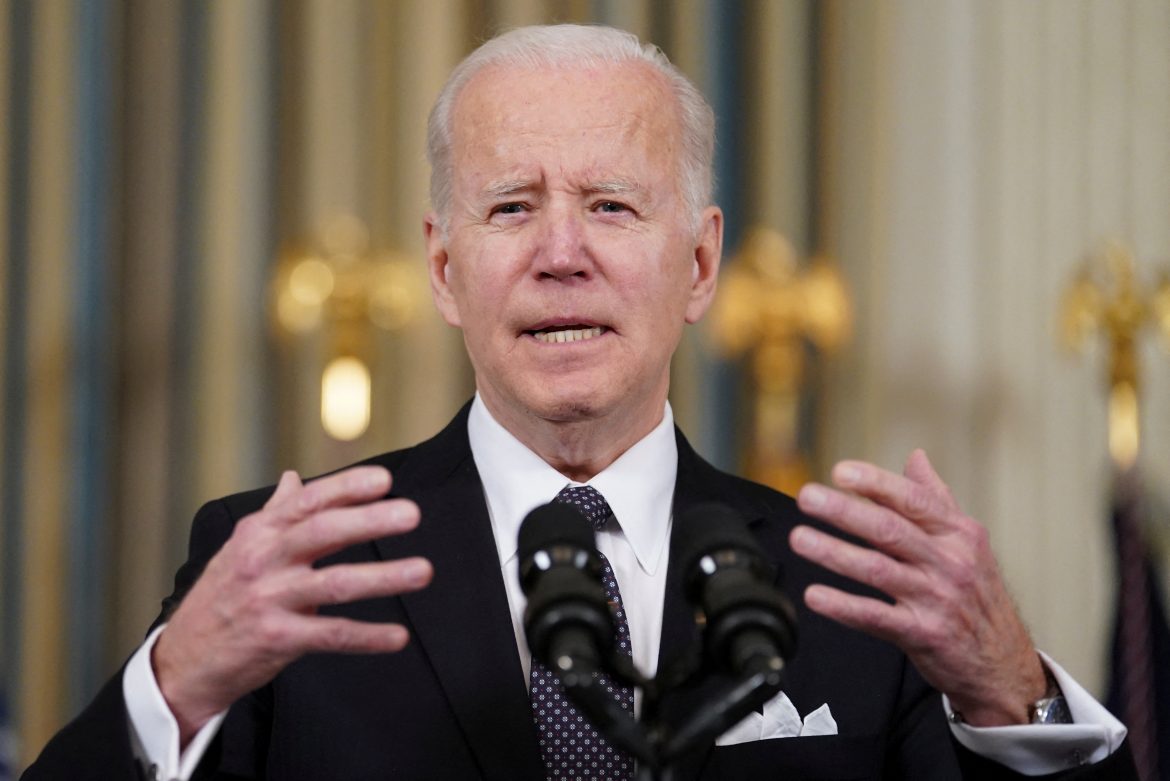 Republican Congressional leaders are blasting President Joe Biden for a series of concerning off-script comments he made over the weekend in Europe, where he was attending emergency meetings to discuss Russia’s escalating war on Ukraine.

The President appeared to call for a regime change in Russia during a speech he gave in Poland Saturday. Addressing a crowd at the Royal Castle in Warsaw Saturday, Biden declared that “Ukraine will never be a victory for Russia,” and vowed that the embattled country “will have a different future, a brighter future, rooted in democracy and principles, hope and light, dignity and decency, freedom and possibilities.” He then appeared to veer off-script in a reference to Russian President Vladimir Putin, saying, “For God’s sake, this man cannot remain in power,” insinuating a plot by the West to effect a regime change in Russia.

The comment left White House officials scrambling to downplay the potentially incendiary gaffe – the third in a trio of troubling verbal blunders made by the President over the course of the summitry.

“The President’s point was that Putin cannot be allowed to exercise power over his neighbors or the region. He was not discussing Putin’s power in Russia, or regime change,” a White House official clarified in a statement, as reported by Fox News’ Jacqui Heinrich.

Secretary of State Antony Blinken took a pause from meetings he was attending in Jerusalem Saturday to insist that Biden was merely suggesting that the Russian president “cannot be empowered to wage war or engage in aggression against Ukraine or anyone.”

“As you know, and as you have heard us say repeatedly, we do not have a strategy of regime change in Russia or anywhere else, for that matter,” the U.S.’ top diplomat said.

On Monday, however, the President went off-track from his administration’s damage control campaign, telling a reporter he was “not walking anything back” during a Q and A with reporters following his proposed spending plan announcement. “The fact of the matter is I was expressing the moral outrage I felt,” he added.

“It’s ridiculous,” Biden told another reporter. “Nobody believes we’re gonna take down – I was talking about taking down Putin, nobody would believe that,” he asserted with incredulity.

Sen. Tom Cotton (R-Ark.) lamented both the gaffe and the White House’s effort to clean it up during a Fox News interview Saturday.

“[The President] said something that Vladimir Putin will use for his own reasons to say, ‘See I told you all along that the United States and NATO wants to attack Russia, wants to topple our government,’ then his staff turned around and walked it back. So you get the worst of all possible worlds,” said the senator, noting that Biden’s history of making troubling impromptu remarks is “not reassuring for our safety or to our allies.”

“Here’s the president potentially having more war-triggering type language than probably any president in American history,” Jordan said. “We need to be careful and precise in things we say, particularly as commander in chief of our country.”

Jordan went on to suggest that Biden projects incompetence and weakness to foreign adversaries.

“We went from, you know, Ronald Reagan, ‘Tear down [this wall],’ to the toughness of [former President] Trump, to now the President of the United States, President Biden, giving speeches where he basically says, ‘I don’t know what I’m doing.’ So that is very dangerous,” Jordan said, adding, “Let’s hope it stops, and let’s hope there’s an end to this as soon as possible.”

“I just wish he would stay on script,” Risch told CNN. “Whoever wrote that speech did a good job for him. But my gosh, I wish they would keep him on script.”

The Russian regime change comment followed two other concerning unscripted remarks made by the President over the course of last weekend’s emergency weekend summitry in Europe concerning Russia’s escalating war on Ukraine. On two separate occasions, Biden said NATO members would “respond in kind” should Russia engage in chemical warfare and told U.S. troops stationed in Poland that they will witness the bravery of Ukrainians fighting off Russia’s invasion “when you’re there.” The White House was forced to clarify both remarks, as well.

Ahead of Moscow’s invasion of Ukraine in February, Biden suggested the U.S. would not respond to a “minor incursion” at a Jan. 19 press briefing.

“When he goes off-script, every time he does that, he seems to cause an international incident, and we get way off messaging,” Texas Congressman Michael McCaul said during a Monday appearance on Fox’s “Outnumbered.”

“It’s not the policy of the United States to have regime change. And he’s always talking about not escalating, which is the reason why they didn’t send the MiG jets into Ukraine in the first place, because they don’t want to be too provocative.”

The cannonade of criticism continued:

Every time President Biden speaks, his gaffes continue to get worse and worse.

America is living through a Mr. Magoo presidency! pic.twitter.com/V3CtJH00Vx

Judge says it’s ‘more likely than not’ that Trump committed crime on Jan. 6