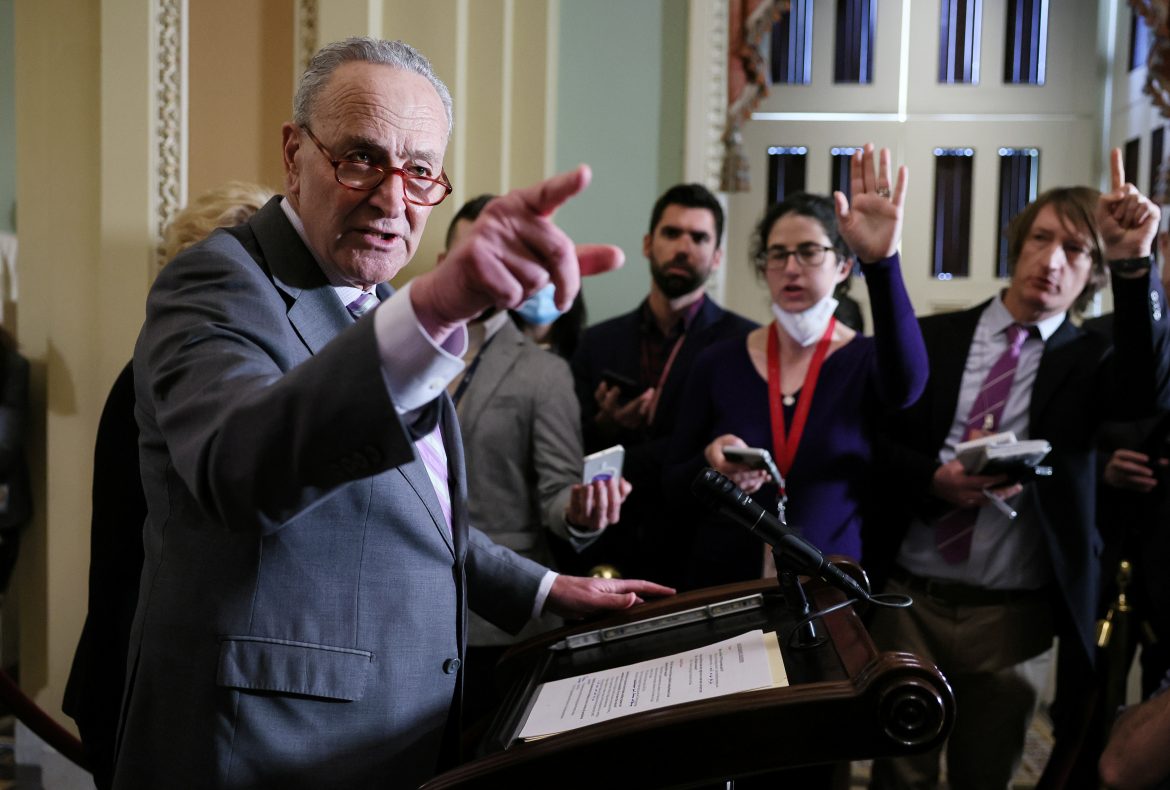 Senate Republicans are warning their Democratic colleagues that they will block any effort to tie aid for Ukraine to the Biden administration’s stalled COVID-19 relief package, following reports that top Democrats were considering linking the two, as first reported by The Hill.

The GOP has refused to sign off on the administration’s proposed pandemic funding unless it also includes a resolution to keep Title 42 in place, pointing out the irony that the administration wants more funding to combat COVID-19 at the same time it is lifting the Trump-era health measure. The policy has thus far prevented 1.7 million illegal immigrants from coming into the country unchecked.

Republicans have been pushing for a vote on a proposal from Sen. James Lankford (R-Okla.) that would prevent the administration from lifting Title 42 as long as there’s a broader COVID-19 public health emergency in place. Senate Majority Leader Chuck Schumer (D-N.Y.), however, has refused to allow a vote on the measure in fear that it would pass

“I don’t think, until this Title 42 issue is resolved, [that] anything is going to go on with COVID,” Sen. Roy Blunt (R-Mo.) said.

The GOP thinks they could attach Lankford’s resolution to a coronavirus aid package with a simple majority, which would only require support from one Democratic senator to pass. Five Democrats have already expressed support for the measure, and more are expected to follow if a vote is allowed.

While Covid related ideoligical differences has led to delays in the Senate, support for Ukraine has had vast bipartisan approval up to this point. Republicans and Democrats unanimously approved $13.6 billion in aid to Kyiv as well as a bill that halted normal trade relations with Moscow and another banning Russian energy imports.

GOP officials are saying that would change if Democrats try to strongarm Republicans into signing off on the proposed $22 billion COVID budget, without addressing Title 42.

“I hope the Democrats will separate those two. I don’t think they ought to try and conflate the COVID money and the … Ukraine money,” said John Thune (R-S.D.), the No. 2 Republican senator.

Blunt was more direct in his remarks, saying Republicans won’t even consider a linked package.

Schumer on Tuesday sidestepped a reporter’s question about the possibility of a linked Ukraine/COVID package.

“I would urge our Republican colleagues to pass COVID relief,” he said.

Democrats have not stated publicly that they intend to tie aid for Ukraine to COVID relief, though several are said to have floated the idea. Schumer, meanwhile, is likely to want to force a vote so Republicans will have to go on record saying they won’t approve additional aid for Ukraine, as a means of obtaining midterm smear ad material.

“He might,” Blunt said when asked about the possibility of a forced vote. “I wonder who really looks bad at the end of that, the guy who intentionally put something on the floor that would fail?” he added.

This is not a new tactic for Schumer, who previously vowed to attempt to attach aid to Ukraine to $5 billion in coronavirus spending earmarked for bolstering global vaccination rates.

Dick Durbin (D-Ill.), the Senate’s second-ranking Democrat, told reporters that a final decision had not been made on whether to link coronavirus assistance to Ukraine aid.

“It depends on if you could get some crossover support from one to either. … We don’t want to bog down either package,” the senator said.

Sen. Tim Kaine (D-Va.) said the decision is ultimately up to the Senate majority leader. “Schumer would have to say, ‘Hmm, do we want to pair it but then have a Title 42 vote? Or would we rather do the Ukraine and then not have to face Title 42?” Kaine said.

A federal judge in Louisiana this week issued a ruling that temporarily prevents the Biden administration from repealing Title 42.