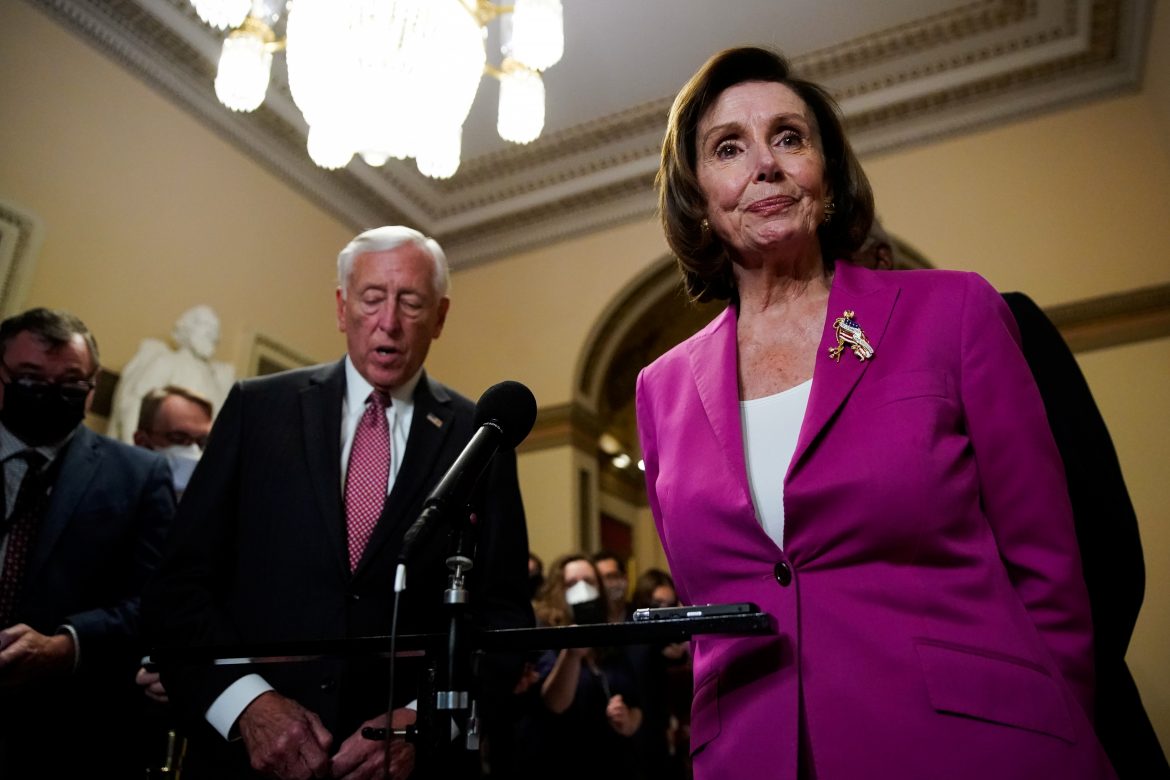 Following weeks of intense negotiations, internal bickering, and closed-door meetings, Democratic progressives and centrists managed to temporarily put their differences aside to pass President Biden’s $1 trillion infrastructure bill. The House vote on the Infrastructure Investment and Jobs Act came in late Friday at 228 to 206, passing with the help of 13 GOP members who sided with their Democratic colleagues to approve the White House’s spending plan.

For many Democrats, the vote represents a much-needed win for their party following Tuesday’s brutal multi-state elections that saw several of its members unseated by Republican candidates, chief of which was Glenn Youngkin’s surprising defeat of Democrat Terry McAuliffe in Virginia’s tight gubernatorial race.

House Speaker Nancy Pelosi (D-Calif.) praised the bill’s passage, tweeting “Tonight, I proudly signed the historic Bipartisan Infrastructure Framework and sent it to @POTUS to be signed into law. This bill delivers a once-in-a-century investment in our infrastructure, creates good-paying jobs and takes a crucial step to #BuildBackBetter For The People.”

“No”-vote House Republicans, many of whom argue that the bill is a blueprint for socialism, torched the 13 members of their party who voted in favor of the legislation, pointing out that Pelosi would not have had enough votes to push it through without their support. Six progressive House Democrats voted against the bill, following through on their vow to do so if their party’s massive social spending bill was not part of the package. Those Representatives include lhan Omar (D-Minn) Alexandria Ocasio-Cortez (D-N.Y.), Cori Bush (D-Mo.), Jamaal Bowman, (D-N.Y.), Ayanna Pressley (D-Mass), and Rashida Tlaib, (D-Mich).

Rep. Marjorie Taylor Greene (R-GA) called out her Republican colleagues who crossed party lines in support of the bill, listing each by name in a tweet: “These are the 13 ‘Republicans’ who handed over their voting cards to Nancy Pelosi to pass Joe Biden’s Communist takeover of America via so-called infrastructure,” she said.

Anti-Trumper Adam Kinzinger (R-Ill.), who voted in favor of the bill, fired back, tweeting “Infrastructure=communism is a new one.  Eisenhower’s interstate system should be torn up or else the commies will be able to conveniently drive! Red Dawn in real life.”

A majority of conservative lawmakers have vigorously objected to the bill, citing that only about a quarter of the funding is designated for actual physical infrastructure projects such as roads, bridges, water pipes and broadband internet, with the bulk of the spending earmarked for Green New Deal programs like subsidies for solar- and wind-powered energy and electric vehicles. The bill also excludes the Keystone XL pipeline project, which President Biden killed shortly after taking office, despite a campaign promise not to do so.

The Senate already approved the legislation by a vote of 69-30 in August. The bill will now advance to President Biden’s desk for final approval.

Democratic leaders had hoped to also pass Biden’s $1.75 trillion “Build Back Better” social spending package Friday; however, negotiations came to a halt with a demand by party moderates for a nonpartisan accounting of its costs which could take several weeks. Hours of closed-door meetings resulted in a promise to vote for the bill by Nov. 20 if the Congressional Budget Office determines that its costs align with White House estimates.

Ahmaud Arbery death: “based on assumptions” or about “duty and responsibility”?