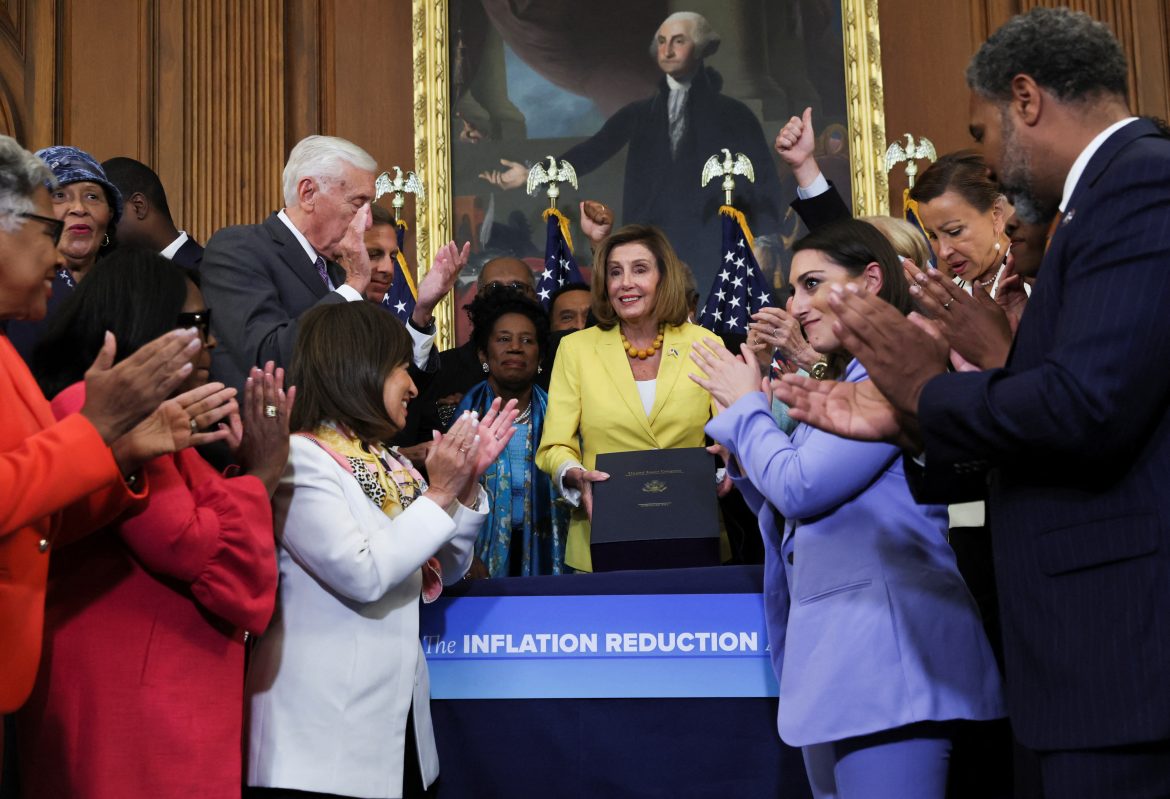 The Inflation Reduction Act, a bill that nonpartisan economists say will not achieve what its name suggests, has passed the House and will soon be signed into law by President Joe Biden, who believes he has notched a win in the run-up to the midterm elections.

Friday, the House passed the $739 billion act – of which some $430 billion will be spent on climate, tax collection, and healthcare measures with the remainder being used to make an incremental reduction in the national debt – by a 220-to-207, party-line vote.

With the passage of the Inflation Reduction Act, House Democrats chose to build a future where everybody has a shot, not just the already-powerful. pic.twitter.com/q83y98FMeu

“With the passage of the Inflation Reduction Act, House Democrats chose to build a future where everybody has a shot, not just the already-powerful,” Biden tweeted.

As previously reported on FISM, the act contains little that can or even might reduce inflation in any meaningful way, and its most popular line-item, one that allows Medicare to negotiate some drug prices, will not include insulin and take years to even begin.

But it does offer what the Biden administration hopes are enough tax increases, green policy, and healthcare measures to inspire the Democratic voting base as the president’s party seeks to stave off major Republican gains in November.

Speaker of the House Nancy Pelosi (D-Calif.) played the campaign card early, using a bill-enrollment ceremony to attempt to paint Republicans as evil.

Republicans responded with mortification and foreboding remarks about what the bill might do to the U.S. economy.

Inflation is at record highs, the economy is in recession, and Congressional Democrats just passed an additional $740 billion in government spending and higher taxes. This is legislative malpractice and should more appropriately be named the "Inflation Expansion Act."

…who thought that more government spending would ease inflation, that higher taxes would grow the economy, and that government-issued green energy subsidies could change the weather.

“Inflation is at record highs, the economy is in recession, and Congressional Democrats just passed an additional $740 billion in government spending and higher taxes,” Rep. Mike Johnson (R-La.) tweeted. “This is legislative malpractice and should more appropriately be named the “Inflation Expansion Act.”

In subsequent tweets in his thread, Johnson added “Over the next few years, as Americans wonder why consumer prices stayed high and the economy stayed in neutral—while the global climate remained unchanged—they should recall this clueless gang of Washington Democrats… who thought that more government spending would ease inflation, that higher taxes would grow the economy, and that government-issued green energy subsidies could change the weather.”

Other Republicans similarly focused on predictions that the bill’s effect on inflation will be, according to the most optimistic projections, negligible.

“This week’s 8.5% inflation report is a resounding alarm the Left continues to ignore. Americans are facing record-high inflation – more spending is not the answer,” Rep. Dusty Johnson (R-S.D.) tweeted, later adding, “Congress should turn its focus to solutions that will solve the supply chain crisis, increase domestic energy production, and get workforce participation back to pre-pandemic levels.”

House Minority Leader Kevin McCarthy (R-Calif.) took the more direct approach and tweeted only, “The Democrats in Washington are addicted to spending your money.”

The Inflation Reduction Act contains spending measures that will pour more money into solar and wind energy, extend funding of the Affordable Care Act (often called Obamacare by the right), and provide funding to communities the Biden administration has identified as the most affected by climate change.

Most notably, the bill also contains a major influx of funding ($78 billion) and manpower (87,000 agents) into the IRS, which Democrats and IRS commissioner Charles Rettig swear is meant only to help force wealthy Americans and corporations to pay all of their taxes and provide better customer service.

“[We] will lower the cost of prescription drugs for our seniors and reduce health insurance premiums for 13 million Americans,” Vice President Kamala Harris said in a statement. “We will make the largest investment in our nation’s history to address the climate crisis, creating good-paying, union jobs in wind, solar, and electric vehicle manufacturing. We will lower energy bills for working families and support environmental justice. And, the legislation is fully paid for by finally ensuring the wealthiest corporations pay their fair share.”

The White House has not yet announced when Biden will sign the bill, but all signs point to this occurring within the next several days.