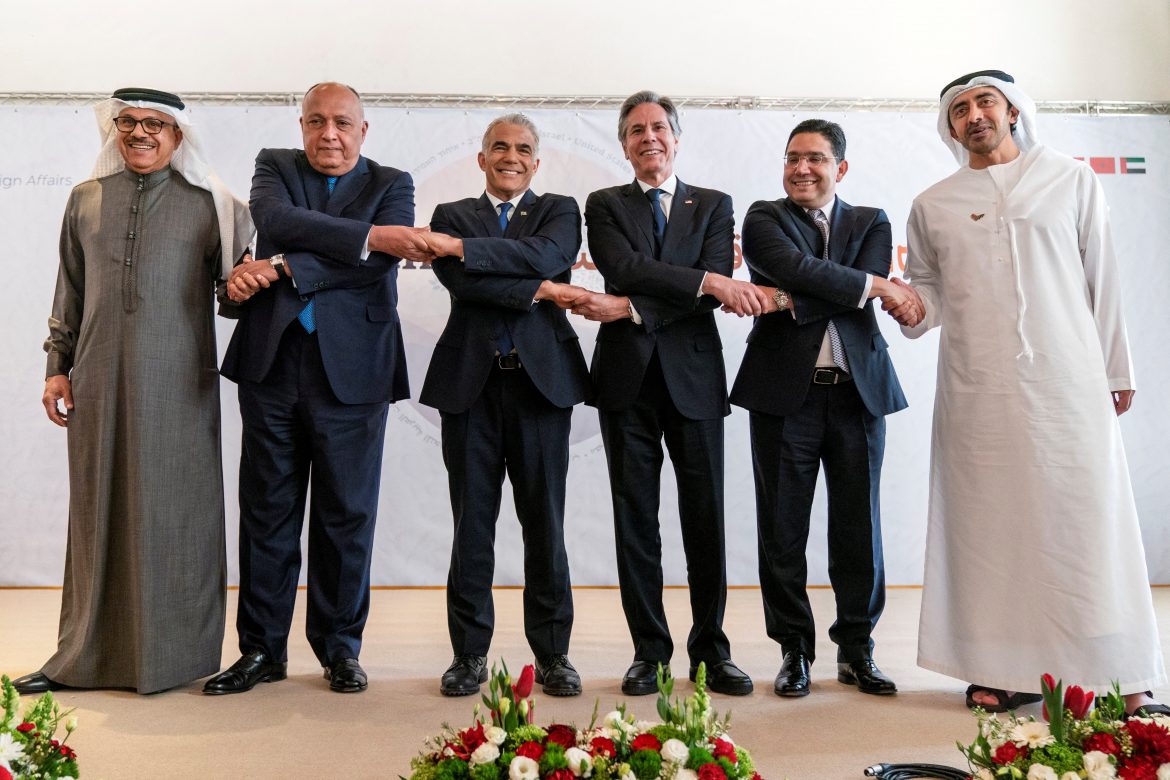 Israel’s foreign minister, Yair Lapid, speaking after a summit today with Secretary of State Antony Blinken and four other foreign ministers of Arab countries, said that “deepening ties with friendly countries from the Arab League will first and foremost help counter the threat from Iran.”

The summit brought together leaders from the United Arab Emirates (UAB), Bahrain, Morocco, Egypt, Israel, and the United States in an attempt by Israel to strengthen its position in the Middle East, but quickly turned to a discussion of a nuclear Iran. Lapid remarked, “Iran is not an Israeli problem.  The world cannot afford a nuclear Iran.  The world cannot afford for the Iranians’ Revolutionary Guard Corps to continue spreading terror around the globe.”

At a joint press conference with Blinken, Lapid spoke directly about the disagreements between Israeli and American leadership concerning the Iranian nuclear program. While Lapid spoke of “open and honest dialogue” with the U.S., it was also clear that the Israeli government does not share Biden’s enthusiasm regarding his efforts to revive the Joint Comprehensive Plan of Action (JCPOA).

The JCPOA was an agreement between P5+1 – U.S., China, France, Germany, Russia, and United Kingdom. According to a previous report by FISM, the deal “outlined certain requirements and measurements that Iran would be required to reach to show that their nuclear plan would remain “peaceful” and that no nuclear weapons would be developed.”

The U.S. adopted the JCPOA during Obama’s presidency on July 20, 2015. President Trump pulled out of the deal in 2018 stating, “it was an embarrassment to him as a citizen.” Trump and other Americans were convinced that the agreement did little to stop Iran from developing a nuclear bomb while providing the country with fewer sanctions and more money that could, in fact, be used in the development of a nuclear program.

Blinken, speaking at the joint press conference in Israel, said, “The United States believes that a return to full implementation of the Joint Comprehensive Plan of Action is the best way to put Iran’s nuclear program back in the box that it was in, but has escaped from since the United States withdrew from that agreement.  But whether there’s a JCPOA or not, our commitment to the core principle of Iran never acquiring a nuclear weapon is unwavering.”

The four Arab countries present included three (UAE, Morocco, and Bahrain) that signed what the Trump administration called the “Abraham Accords” in 2020, along with Egypt who was the first Arabic country to make peace with Israel. Jordan’s King, on the other hand, declined to participate in the summit instead visiting the West Bank in solidarity with the Palestinians. Blinken addressed Palestinian relations in his talks during the summit, calling for a “negotiated 2-state solution.”

Even with the highlighted disagreements between Israel and the U.S., Lapid said the group was “making history” and that the summit would become an annual event between Israel and its Arab allies. In regards to Iran and other combative states, Lapid said, “This new architecture, the shared capabilities we are building, intimidates and deters our common enemies, first and foremost Iran and its proxies. They certainly have something to fear. What will stop them is not hesitation or being conciliatory but rather determination and strength.”

It is yet to be seen how the Biden Administration will proceed with a JCPOA that has been described as “weaker than the previous version,” even after 11 months of negotiations according to Al-Jazeera. Among the things being discussed are loosening Iranian sanctions and removing the “foreign terrorist organization” designation from Iran’s IRGC. During the press conference yesterday, Blinken was clear in specifically saying that the IRGC is classified as a terrorist organization. However, will that designation stand if the new JCPOA is adopted and how will the U.S. continue to stand with Israel while at the same time negotiating with Palestinian and Iranian leaders?