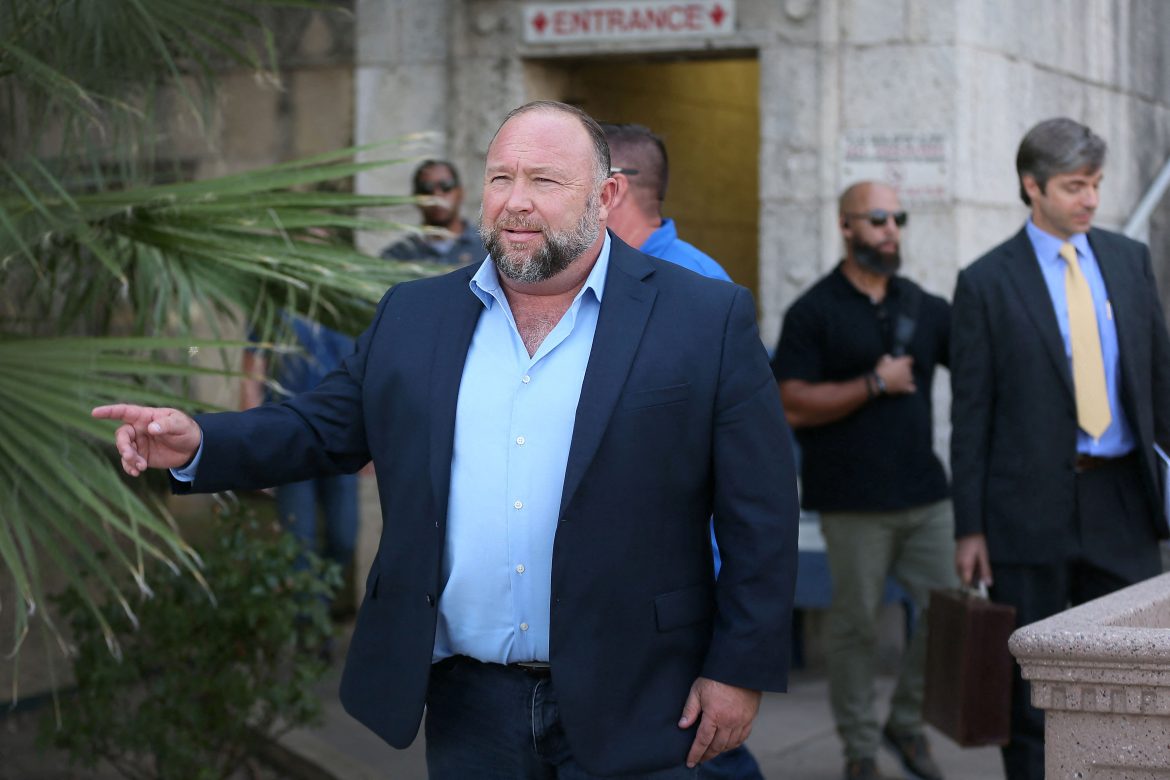 U.S. conspiracy theorist Alex Jones should pay parents of a child killed in the 2012 Sandy Hook massacre at least $4.1 million for falsely claiming the shooting was a hoax, a Texas jury said on Thursday.

The verdict followed a two-week trial in Austin, Texas, where Jones‘s radio show and webcast Infowars are based. The amount fell far short of the millions of dollars in compensatory damages that had been sought.

Neil Heslin and Scarlett Lewis, separated parents of slain six-year-old Jesse Lewis, testified that Jones’ followers harassed them and sent them death threats for years in the false belief that the parents were lying about their son’s death.

The 12-person jury will next consider the parents’ request for punitive damages from Jones for spreading falsehoods about the killing of 20 children and six staff at Sandy Hook Elementary School in Newtown, Connecticut, on Dec. 14, 2012.

Those deliberations are expected to begin after both sides on Friday present arguments on Jones’ net worth.

The jurors, who voted 10-2 on compensatory damages, could still award the parents a large punitive damages verdict if they think Jones’ conduct was not highly damaging but worthy of punishment, legal experts said.

“We are very pleased with the verdict, and we are looking forward to the punitive damages phase that starts tomorrow,” Kyle Farrar, an attorney for the parents, said in an email.

Lawyers for Jones, who was not present in the courtroom while the verdict was read, did not immediately respond to a request for comment.

Trial consultant Jill Huntley Taylor said it is not uncommon for a jury to award higher punitive damages than compensatory ones.

“If jurors’ motivation for an award is their anger at the defendant, then they often award a bigger punitive damage number,” she said in an interview.

During closing arguments on Wednesday, Farrar urged jurors to end what he called their nightmare and hold Jones accountable for profiting off their son’s death.

Federico Reynal, an attorney for Jones, acknowledged during his closing argument that Jones and Infowars reported “irresponsibly” on Sandy Hook but said his client was not responsible for the harassment.

Jones previously claimed that the mainstream media and gun-control activists conspired to fabricate the Sandy Hook tragedy and that the shooting was staged using crisis actors.

He later acknowledged that the shooting took place and sought to distance himself from previous falsehoods during the trial, telling jurors it was “crazy” of him to repeatedly make the claim that the shooting was a hoax.

In a surprising development, Heslin and Lewis’ lawyers disclosed Wednesday that Jones’ lawyers had inadvertently sent them two years’ worth of his texts and failed to request them back in time.

Gamble on Thursday denied a motion for a mistrial by Jones‘s lawyer who argued that attorneys for the plaintiffs should have immediately destroyed the records. The parents may now use the records as they wish.

Jones‘ company, Free Speech Systems LLC, declared bankruptcy last week. Jones said during a Monday broadcast that the filing will help the company stay on the air while it appeals.

Judge Maya Guerra Gamble admonished Jones on Tuesday for not telling the truth about his bankruptcy and compliance with discovery during his testimony.

The parents’ lawyer also accused Jones of approaching the trial in bad faith, citing broadcasts where Jones said the trial was rigged against him and that the jury pool was full of people who “don’t know what planet they’re on.”

Heslin and Lewis joined other Sandy Hook parents in urging a judge to block Free Speech System from sending Jones or his companies any money until they get to the bottom of their finances.

The parents claim that Jones took $62 million from the company while burdening it with $65 million in “fabricated” debt owed to PQPR Holdings, a company owned by Jones and his parents.

Jones was set to stand trial in a similar suit in Connecticut in September, but that case is now on hold while the bankruptcy proceeds.

The Sandy Hook gunman, Adam Lanza, 20, used a Remington Bushmaster rifle to carry out the massacre. It ended when Lanza killed himself with the approaching sound of police sirens.